Even as Carolinians brace for the possibility of flooding from a tropical storm this weekend, ships at the Port of Wilmington are offloading clothes and chemicals produced abroad while others depart laden with weaponry and tobacco.

The port is a 24-hour-a-day cog in the region’s military- and agriculture-heavy economy, but its operations come at a hidden cost. New research has revealed the role that dredging for shipping channels is playing in worsening floods in Wilmington, N.C. and neighboring towns. 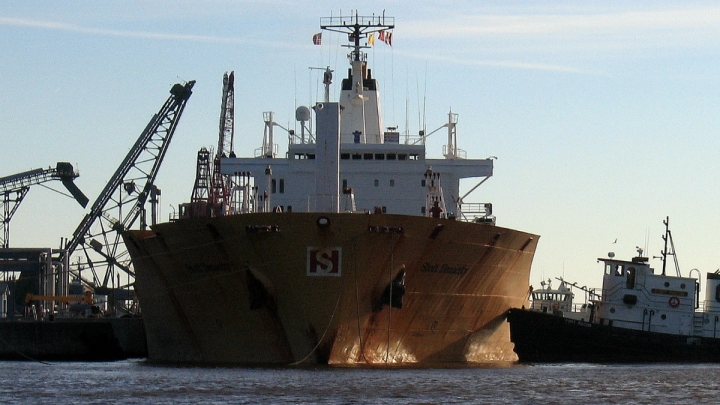 Wilmington is bordered to the west by the Cape Fear River, which has a natural narrowing shape that acts like a funnel when king tides and storm surges roll in, causing banks to overflow.

Shipping channel improvements have exacerbated that flooding. They have increased the worst-case storm surge that would be expected from a Category 5 hurricane in Wilmington to 18 feet, up from 12 feet in the 19th century, when the channels were half today’s depth, Portland State University modeling has shown.

Hurricane Fran, a 1996 Category 3 hurricane, for comparison, drove a nearly 6-foot storm surge over Wilmington. The storm fortuitously made landfall at low tide, reducing potential flooding while nonetheless damaging three quarters of homes in the city.

“Because boats are getting larger and larger, they’ve got to dredge deeper and deeper to allow those ports to remain economically viable,” said Ben Horton, a Rutgers scientist who wasn’t involved with the study.

When channel deepening is planned, such as for a project at the Delaware River, Horton says potential storm surge impacts are not being investigated. That could worsen flood hazards.

“If you increase water depth, you’re going to get less drag, and storm surge is going to have more power,” Horton said.

The deepening of shipping channels along Cape Fear River during the last 150 years to accommodate modern shipping has accentuated its funneling effects when seawater rushes inland.

The channel deepening was the “primary cause” of “significant” changes in tides and storm surges, the Portland scientists concluded in their paper, published in the journal Geographical Research Letters.

Cape Fear River flooding is worst when downpours coincide with high tides and storm surges. Even by mid-Atlantic standards, where rising seas, shifting currents and sinking lands are worsening flood risks, the waters have swollen around Wilmington with exceptional haste. 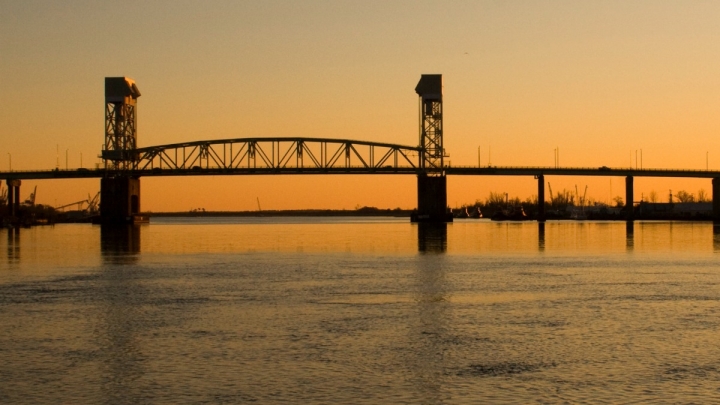 A bridge to Wilmington, N.C., over the Cape Fear River.
Credit: Seuss/flickr

“When it’s the worst is when there’s heavy rain, and then more so when there’s high tide,” said Philip Prete, a senior planner at the city.

Wilmington alone has spent $42 million on drainage improvements since 2009, much of it in neighborhoods that were built where wetlands once grew, in an endless effort to ease floods by hurrying stormwaters into the river after rain.

“Wilmington is an outlier,” said Stefan Talke, one of the scientists involved with the research. “There’s maybe a couple other places in the world where there have been such large tide changes over the last 100 or 150 years.”

Talke and a colleague produced hydrodynamic models to test the effects of historical channel deepening in worsening storm surge risks around Wilmington. They used tide and storm data, some of which was scoured from the U.S. National Archives, to test the accuracy of their modeling.

The findings may have implications around Jamaica Bay in New York and San Francisco Bay in California, and for flood-prone communities established along other rivers near coastlines and shipping channels, such as Philadelphia.

In a region beset with rapidly rising seas because of a confounding array of natural and human causes, the modeling results show that a cause of flooding that can be severe in places is largely being ignored.

“Direct engineering interventions and modifications to our coastlines and estuaries and harbors can have a big effect,” Talke said. “We may actually be changing the physics of the system.”