LE BOURGET, France — The Obama Administration wants an agreement to emerge from meetings in Paris that redefines the nature of global cooperation in the fight against climate change, but the developing world’s most influential diplomats are strongly resisting a key negotiating demand.

Since governments struck their first climate pact in 1992 they have been divided into two groups: rich and poor, with only the rich obliged to work to slow warming. How those old divisions might be recast in a new climate agreement has been a contentious issue during negotiations this week. 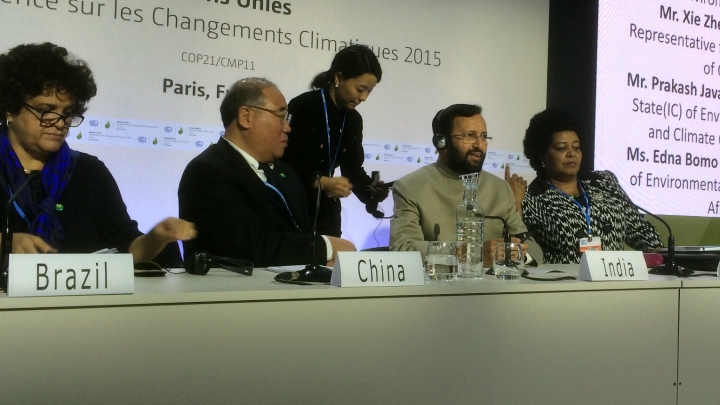 Ministers representing each of the countries comprising the BASIC negotiating bloc preparing for a press conference in Paris on Tuesday.
Credit: John Upton

The U.S. and Europe want to abolish the old divisions in any new climate pact, which they view as arbitrary and outdated. Greece — a country wracked by debt and being forced to drastically cut its national budget — is considered a rich country, for example, while Singapore, which has one of the world’s most stable economies, is categorized as poor.

In a joint news conference on Tuesday, ministers representing China and India — two nations considered “developing” countries, and two of the biggest overall climate polluters — and two other rapidly industrializing countries forcefully pushed back against the thrust.

The pushback comes despite the countries enjoying much stronger economies than had been the case in the early 1990s, with increasingly large carbon footprints that match their growing economic might.

Lead U.S. negotiator Todd Stern told reporters that the 1992 system created a “stark bifurcation” between countries “with expectations of who does what” regardless of “how advanced or wealthy or large emitters countries became.” European negotiators have made similar criticisms.

Under the U.S.-backed vision for a new approach to global climate diplomacy, which gained strong traction in the leadup to the Paris talks, all countries would contribute to the fight against climate change, with wealthier countries helping poorer ones reduce their impacts.

China, India, Brazil and South Africa generally agree that they must address climate pollution, but they want clear distinctions between nations based on wealth to remain in any climate agreement, which could limit their accountability.

India’s environment minister, Prakash Javadekar, called for any new agreement to “fully respect” the principles in the 1992 and subsequent agreements, including an agreement struck in Durban, South Africa in 2011.

“In particular,” Javadekar said the principle of common but differentiated responsibilities must continue be respected. “There is no question of diluting these principles.”

Such a system could see the four fast-growing economies treated the same as nations that remain poor and that stand to suffer the most from climate change, such as Haiti and Bangladesh.

Stern said he supported a “nuanced and flexible” new system “in which all countries do what they can on a nationally determined basis, urged to do the most that they can, and fully differentiated because they make their own decisions.”

In climate negotiating parlance, rich countries are called Annex I Parties — a designation the U.S. wants eradicated from climate pacts. Yet the phrase persisted in a draft text of a Paris agreement published on Saturday.

The likely outcome of the spat may become clearer on Wednesday, when negotiators aim to produce a new draft of what could eventually become an historic Paris climate agreement, with the hope of finalizing it on Friday.