Cities — the best of which are bastions of transit networks, bike paths, compact apartments and chirpy baristas — are growing faster than litters of sewer rats, exacerbating their already-high hungers for energy. The trend is so steep that a new analysis projects that urban centers will be burning through three times more energy in the year 2050 than was the case in 2005.

But what sounds like a threat could also be viewed as an opportunity. The new study, by five European and American researchers and published Monday in Proceedings of the National Academy of Sciences, pinpoints staggering potential climate benefits of smart growth, gasoline taxes and other measures that can reduce energy demand in urban centers, which is where a growing majority of the world’s population is becoming concentrated and where most of its energy is used.

By taking these key steps, particularly in Asia, Africa and the Middle East, the analysis concluded that the world’s cities could limit themselves to using 540 exajoules of energy in 2050 (it takes the U.S. about three weeks to produce enough crude oil to generate 1 EJ of energy). That’s a lot of energy — more than double cities’ 2005 energy demand of 240 EJ. But it’s a quarter less than the projected demand of 730 EJ under the business-as-usual scenario analyzed. 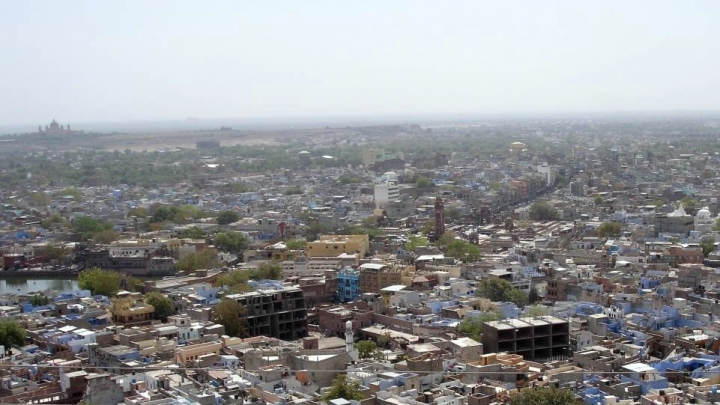 Given that most of the energy used by humanity today comes from fossil fuels, improving the energy efficiency of cities could deliver big climate benefits. Cities account for so much of the world’s energy use that a recent U.N climate report concluded they’re responsible for three quarters of yearly carbon dioxide pollution.

The researchers spent more than two years analyzing data from three major international sources for 274 cities, grouping those cities into eight clusters based on their size, climate, income levels, economic profiles and other factors that can influence energy use.

“We’re looking for what cities have in common in terms of the factors that drive energy use and emissions,” Mercator Research Institute on Global Commons and Climate Change researcher Felix Creutzig, an author of the study published Monday, said.

They also modeled projected increases in urban energy use, including how energy use would be affected if different types of cities adopted various low-carbon urban development strategies to improve energy efficiency.

They found the greatest opportunities to curb future energy use are in cities in developing countries, many of which have not yet locked in car dependency, the long commutes and the sprawling suburbs of less efficient urban centers. For those cities, good urban and transportation planning strategies were found to be key.

Of the overall opportunity to reduce projected urban energy use by 2050, which the researchers called the urbanization mitigation wedge, 57 percent was found to be in Asia. Another 29 percent was in Africa and the Middle East.

Improving urban and transportation planning in countries where the very concepts are often foreign would, experts agreed, be challenging. It’s common in developing countries for rickety homes and businesses to be built on underused land without obtaining permits or permission, resulting in sprawl that’s underserviced by sewer lines, roads and other infrastructure.

“In India, there is no urban form,” said Anshuman Khare, a sustainable development professor at Canada’s Athabasca University who grew up in India and has also worked and studied in Japan and Germany. “You look at Asia and say, ‘OK, what has to change there?’ I can’t say what has to change, because everything has to change.”

Evidence from China, where some cities, such as Shanghai, have been working to introduce Western-style transportation plans, suggest that the challenges could be surmountable, said Michael Replogle, the policy director at the Institute for Transportation and Development Policy, which helps cities around the world with transportation planning. Overcoming those challenges may require intensive assistance from foreign countries and cities where urban planning and building codes are taken for granted.

“The Indians need to learn from those best practices,” Replogle said. “This points to an area of big need, which is to create and rapidly strengthen institutional capacity in urbanizing developing countries to do urban planning and transportation planning.”

The most developed countries, by contrast, were found to be capable of contributing just 6 percent to the wedge between them. In wealthy and mature cities, the keys to easing future energy demand were found to be high gasoline prices and compact urban design, which can be achieved through building codes. Once a sprawling city, such as Phoenix, has been built, its high energy use is considered to be locked in.

“If we wait too long, then we lock ourselves into a carbon-intensive, high-energy demand, high-energy consumption structure that cannot be changed for years to come,” Giovanni Baiocchi, a University of Maryland environmental economist who helped produce the new study, said. 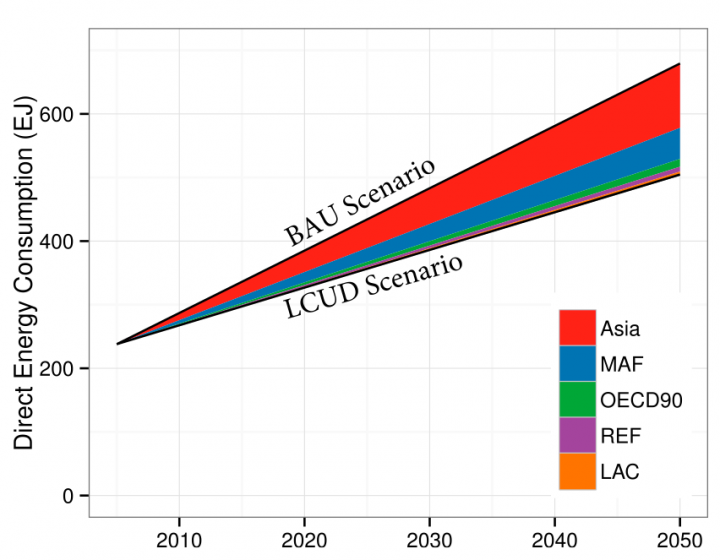 This figure, from the new paper, shows projected growth in urban energy demand under business as usual (BAU) and low-carbon urban development (LCUD) scenarios. OECD90 refers largely to developed countries; LAM is Latin America and the Caribbean; MAF is the Middle East and Africa; REF is the reforming economies of Eastern Europe and the former Soviet Union.
Click image to enlarge. Credit: PNAS

“If you create a structure where it’s impossible to go to work unless you have cheap gas prices, it just makes it more risky and it exposes the system to dangers of shock if oil prices go up,” Baiocchi said.

Some experts, however, questioned the 6 percent finding, saying the research appears to underestimate the potential for established cities to reinvent themselves by retrofitting infrastructure and rebuilding or redesigning existing buildings.

“We could try deep retrofits to the built environment, especially in those inner ring suburbs that have such a high carbon footprints, with things like 100 percent renewable energy, electrified and renewably powered vehicles, onsite water capture and reuse systems and tons more car-free or car-light mobility solutions,” Tam said. Such technologies exist, Tam said, but haven't been “massively” scaled up. “We could deeply decarbonize America's existing urban environments. It would take a ton of political will, but I think it's possible.”

Internationally, Tam said it should be possible for developing cities to “leapfrog” the urban planning mistakes made elsewhere in the past — in much the same way that many developing countries skipped landlines and went straight to mobile cell phones and towers.

That might require ongoing assistance from the U.S. and other Western countries — but it would also yield benefits for those countries, as it would slow climate change.