What You Need to Know About U.S.-China Climate Pact

It’s been a busy few months for international movement on climate change. Following a September climate march and meetings at the United Nations and an announcement by the European Union to cut greenhouse gas emissions, President Obama and Chinese President Xi Jinping topped it all by announcing a new joint climate commitment late on Tuesday.

“As the world’s largest economies and emitters of greenhouse gases, we have a responsibility to lead the world on climate change,” President Obama said in a joint press conference with President Xi in Beijing.

In short, it’s a landmark deal, and provides a ray of hope for limiting global carbon emissions and securing a new global treaty on climate change. 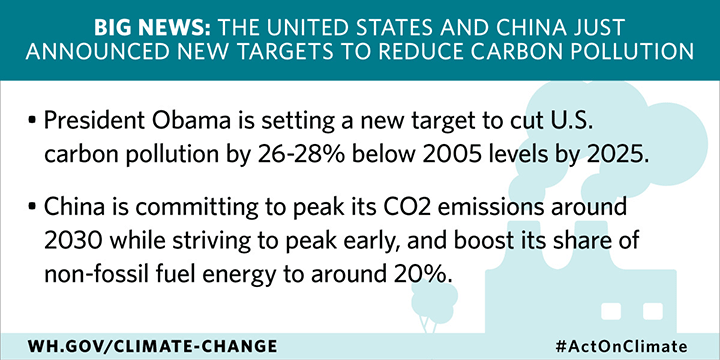 So wait, what’s the deal?

The U.S. has agreed to cut carbon pollution by 26-28 percent below 2005 levels by 2025, doubling its previous commitment and building on Obama’s previous pledge.

“This is an ambitious goal, but this is an achievable goal,” Obama said.

On the Chinese side, it’s even more ambitious and more groundbreaking. For the first time,  China said it would see its emissions peak by 2030, and increase its use of clean energy to around 20 percent of its total energy production by 2030 as well. 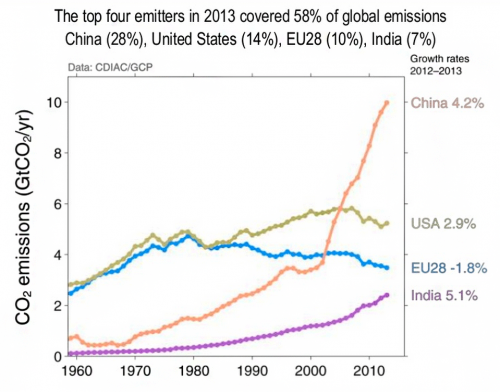 China and the U.S. are the two biggest greenhouse gas emitters, accounting for roughly 40 percent of the world’s total emissions annually. Each percentage point they reduce (or at least slow) their emissions will have an outsize impact and move the world closer to limiting the global warming below the 2°C (3.6°F) threshold scientists and policymakers have set as a “safe” limit.

OK, cool. How are they going to do it?

The countries propose a teamwork approach that mixes clean energy advancements, phasing out harmful hydrofluorocarbons, investing in low carbon cities and carbon capture and storage and green trade. Much of the energy work will be done through the U.S.-China Clean Energy Research Center, which according to its 2012-13 progress report is running 88 projects that look at improved building efficiency, cleaner transportation and carbon capture and sequestration at coal plants.

One of those carbon capture projects will sequester 1 million tons of carbon dioxide while also producing about 370 million gallons of freshwater per year. This part of the plan is likely appealing to China, which burns 4 billion tons of coal per year and is projected to burn even more coal over the next 30 years. The U.S. will also help build a 380-megawatt concentrating solar plant in China, comparable to one that went online in the Nevada earlier this year.

The hydrofluorocarbons initiative builds on a previous agreement between the two countries to reduce emissions from chemicals developed for use in refrigeration that have also been proven to be potent greenhouse gases.

The clean cities initiative will focus on the growing urban populations in both countries and sharing information about planning, improving energy efficiency and reducing air pollution.

Finally, the green trade work will focus on ensuring information about clean energy technology and infrastructure are shared between high level delegates in both countries.

About that 2°C thing. Does this agreement get us there?

Sorry to ruin the good vibes but not even close. Some analyses indicate China’s emissions would have to peak by 2025 for the world to have a chance at meeting the 2°C limit. And the U.S. announcement is less ambitious than the plan the European Union agreed to last month of slashing carbon emissions 40 percent below 1990 levels by 2030.

To really avoid the worst effects of climate change from runaway sea level rise to increasing heat waves and ocean acidification, not only will emissions need to be cut, but a lot of fossil fuels will have to stay in the ground (or at least unburned). The concept of a carbon budget isn’t a new one, but at last year’s international climate talks in Warsaw, negotiators ignored the budget drawn up by the Intergovernmental Panel on Climate Change so something’s going to have to give.

So that’s kind of downer

Not so fast. It’s not all kumbaya, but it’s a definitely a step in the right direction. The new pact is very likely to be a huge boon to international climate negotiations coming up in Lima, Peru next month and the even more crucial negotiations in Paris in 2015. President Xi said that the U.S.-China pact should help spur a replacement to the current international climate agreement in place, the Kyoto Protocol, which is set to expire at the end of 2015.

The White House announcement of the plan also indicates that China has the “intention to try to peak early” so a 2025 peak isn’t entirely out of the question.

“The U.S. and China should be commended for putting their initial pledges on the table so early. This should inject a jolt of momentum in the lead up to a global climate agreement in Paris,” said Andrew Steer, head of the World Resources Institute in a press release.

It remains to be seen if that jolt will happen and if countries will follow through, but Tuesday’s show of solidarity between China and the U.S. means the world is closer to the goal of minimizing the impacts of climate change than it was on Monday. So hey, progress.

You May Also Like:
Listen to a Glacier, Forecast a Flood
Expanding Antarctic Sea Ice is Flooding ‘Warning Bell’
Oceans Getting Hotter Than Anybody Realized
Two Years On: Sandy Inspires Storm of Climate Research
Climate Fueled Some of 2013’s Most Extreme Events