Despite Spate of Tornadoes, 2014 on Track for Low Total

Even with the deadly spate of tornadoes spawned this weekend, 2014 is still on pace to see one of the lowest recorded counts for a tornado season, scientists say. That it comes on the heels of one of the busiest seasons on records just a few years earlier is part of a trend in extreme variability that researchers are examining in an effort to determine the cause, including the potential influence of climate change. 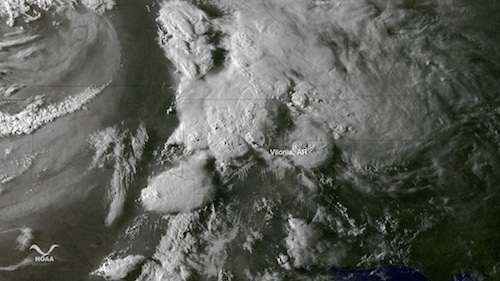 The string of recent tornadoes that stretched from Arkansas to Georgia marked the end to a streak of 159 days without a tornado ranking an EF3 or higher on the Enhanced Fujita scale (which goes from 0 to 5). And after cataloguing only 93 tornado reports through April 24, the National Weather Service’s Storm Prediction Center had tallied 87 reports alone on Monday.

The streak and dearth of tornado reports were indicators of how uneventful the 2014 season has been in its early parts, much like the 2013 season was. The past three seasons have all stood in stark contrast to the 2011 tornado season, which had the second highest tornado count on record.

All of the years since 2011 have actually seen relatively dampened activity in terms of tornado counts, a stark juxtaposition that seems to be following a trend of more extreme changes in tornado activity in recent years, Greg Carbin, the warning coordination meteorologist at the SPC, and his colleague Harold Brooks have found. The pair is looking at whether climate change, among many other factors, could be playing a role in this and other tornado trends.

For much of the 2014 season, the overriding atmospheric pattern of cooler-than-normal conditions in the eastern U.S. has kept a lid on tornado formation, as the warm, moist air over the Gulf of Mexico was kept at bay. This warm air can flow in over the land surface and make the atmosphere unstable, as it is less dense than cooler air above and so it rises, a necessity to get the thunderstorm activity that produces tornadoes.

“We weren’t able to get large amounts of instability,” said Bill Bunting, chief of operations at the SPC in explaining one of the reasons for the low tornado counts. 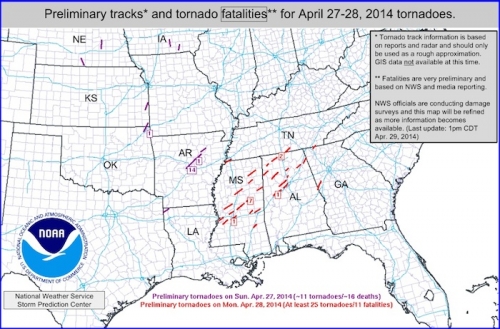 The preliminary tracks of tornadoes across the U.S. on April 27 & 28, 2014, as well as reported deaths from those storms.
Click image to enlarge Credit: NWS SPC

That has changed with the current situation: Within a slow-moving low pressure system moving eastward across the country from the Rockies are small, circulating disturbances that are kicking up some of that warm, moist air “and providing the shear and the lift” needed for tornadoes to form, Carbin said.

Wind shear is essential to the formation of tornadoes, as it starts the rotation that eventually can become a twister. The shear in the current system comes from the southerly flow of the warm, unstable air from over the Gulf and the strong westerly flow of jet stream winds higher up.

“It’s a volatile situation,” Carbin said, one that continues to threaten the mid-South and Southeast through Wednesday.

This weekend's outbreak of tornadoes falls on the anniversary of an extreme outbreak in 2011, a 4-day event that peaked on April 27 (lasting from April 25-28). The event, one of the deadliest on record, killed 316 people, most of them in Alabama. That state bore the brunt of the tornadoes that formed on April 27, 15 of which were rated an EF4 or EF5.

While the coincidence of the two tornado events isn’t unexpected, given that this is the time of year that tornado outbreaks are most common, Carbin cautioned that “you can’t even really compare the two.”

April 2011 “just sets the bar,” he said. It established “the upper limit of what the atmosphere can do in a day with respect to tornadoes.”

Tornado seasons have always seen considerable variability from year to year, but the stark difference between the tornado seasons of 2011 and 2014 are part of a trend in higher amplitudes between seasonal extremes that Carbin and Brooks have noticed.

They have been scouring tornado records and found several interesting trends: the extremes in the start days to the tornado season have widened in recent years; the number of days with tornadoes has declined, but the number of tornadoes per day has increased; and the number of tornadoes seen in a given month seems to vary with temperature for some months. For example, warmer winters — a likelihood with a warming climate — typically see more tornadoes than average, while, conversely, warmer summers see fewer.

Carbin and Brooks, a senior scientist with the National Severe Storms Laboratory, are looking to see if they can figure out the underlying causes behind these trends, including whether climate change plays a role.

But the bottom line is that “this is what happens in this part of the world” at this time of year, Carbin said. Some years and outbreaks are more hectic than others and some tornadoes more damaging, but they are recurring springtime threat for Tornado Alley.