Short on Ocean Data, Scientists Turn to Seals for Help

Southern elephant seals, weighing in at up to 4,400 pounds, are not the most graceful animals. Nor are they typically thought of as particularly attractive, cute, or cuddly. But for an international team of marine biologists and oceanographers, these marine mammals have proven to be just about the perfect partners for obtaining precious data on the vastly underexplored Southern Ocean. 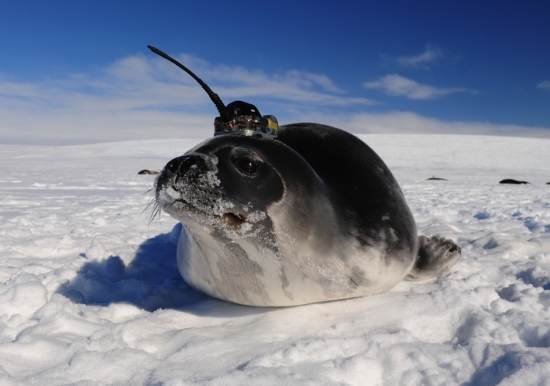 Despite being a crucial driver of the world’s ocean circulation patterns, the Southern Ocean is the ocean that researchers know the least about. The vast body of water begins off the southern tip of South America and Africa and rings the frozen expanse of Antarctica, and has some of the most tumultuous weather of any spot on Earth. This renders research operations there risky and expensive, and the only data that oceanographers have on the structure of the undersea environment, from measures of ocean salinity to temperature profiles, comes from widely separated shipborne instruments.

A new paper published in December demonstrates that scientists have gone to great lengths to address the shortfall of data, in this case by turning to the very creatures that are naturally at home in this region: elephant and weddell seals. In a sense, the scientists turned these seals into natural drones.

The study details the results of nearly a decade of observations using an unorthodox method that required a unique pairing between physical oceanographers and marine biologists, using elephant and weddell seals as a scientific platform. Since 2004, teams of scientists have been placing instruments known as “conductivity-temperature-depth sensors” on the hair of these seals, and recording data as the seals go about their normal lives.

The instruments, which are based on technology first developed in the 1970s, are not harmful to the seals, and allow data to be gathered on the temperature and salinity of the ocean water at different depths. Elephant seals have been known to dive as deep as a mile or more beneath the surface, and in doing so, they carry the instruments with them, gathering vertical profiles of temperature and salinity.

That information will help scientists learn more about the structure of the Southern Ocean, and they hope it will improve their predictions for how ocean circulations and sea ice conditions in the Southern Hemisphere may change as the world warms.

Any changes to global ocean circulation patterns could have profound effects on the global climate, since the vast majority of the sun’s heat is stored in the ocean, including much of the extra heat from increased greenhouse gases in the air. In addition, the seal-based research could help scientists determine why seasonal sea ice near Antarctica has been expanding in recent years, in contrast to the Arctic, where sea ice has been in free-fall since the late 1970s. 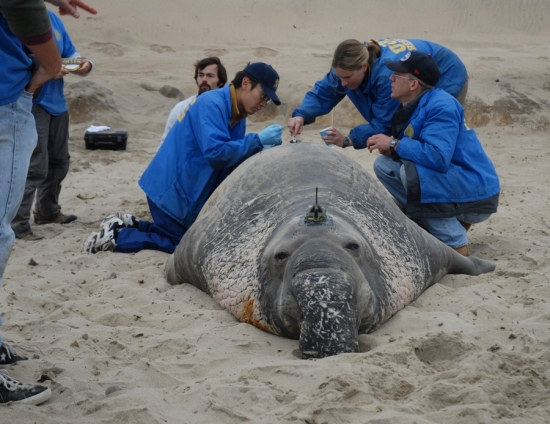 A northern elephant seal as it is fitted with a conductivity/temperature/depth tag by a team of University of California, Santa Cruz researchers. The sensor used here is similar to the ones used to study southern elephant seals near Antarctica.
Credit: National Oceanographic Partnership Program/Dan Costa.

The Southern Ocean is among the most important areas when it comes to influencing the global circulation of ocean waters. What happens in the deep ocean waters there helps to maintain the network of global ocean currents that snake through the seas like a network of veins, collectively known as the “Great Ocean Conveyor.” Through these currents, the Southern Ocean is connected to the Gulf Stream that flows northward along the U.S. East Coast, as well as currents that transport waters off the coast of Europe.

Determining how these currents are changing in response to a warming climate is a key question for climate scientists. But scientists are largely in the dark about many of the processes at work in the Southern Ocean, particularly how extremely dense and salty areas of water known as Antarctic Bottom Water is formed and transported. The primary challenge researchers face is first solving the problem of how to gather observations there, which sets this region apart from more accessible oceans, such as the North Atlantic.

Here’s where the elephant seals, blubber and all, come into the picture.

Dan Costa, a marine biologist with the University of California at Santa Cruz, said he and his colleagues approached the seals when they were breeding or molting at a rookery, which presented the easiest opportunity to reach them. Using a light anesthetic, the researchers put on a tag using a form of epoxy that glues the tag to the animal’s hair, but which only stays in place for a year or less.

Costa said elephant seals cover large distances, at least 3,000 miles in any direction, and many set out from their rookeries on or near Antarctica, where they were tagged, and criss-crossed much of the Southern Ocean.

The seals, Costa said, routinely dive to between 2,000 and 6,500 feet deep, with many of them diving up to 60 times a day. The sensors keep track of how deep the seals dive, and collect temperature and salinity data as the animal comes back to the surface. This data then is beamed to a satellite, and collected by scientists on land using an online database. 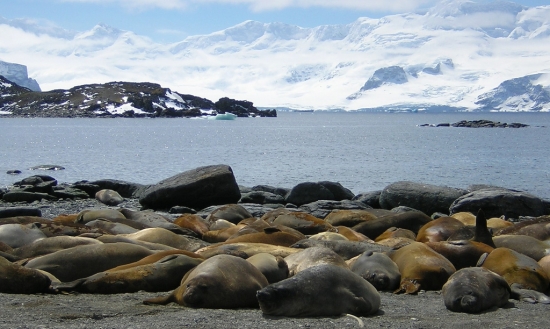 Elephant seals on Signy Island in Antarctica in 2006.
Credit: Mark/Flickr.

The new study showed that a database of 165,000 profiles of ocean waters generated by elephant seal-based sensors significantly improved the reliability of a computer model used to simulate the ocean circulation patterns, as well as the sea ice extent and volume in the waters surrounding Antarctica.

“The fact that we can actually follow them using this small instrumentation, and even more that we can get information along their way . . . is now changing the way we can work in the study of the polar sea,” said study co-author Fabien Roquet, a postdoctoral student at Stockholm University in Sweden, in an interview.

Roquet said the seal-derived data allowed scientists to discover that particularly dense water, which may contribute to the manufacturing of ultra-dense Antarctic Bottom Water, forms in an area off the Antarctic coast that was not previously known to be a source region for such waters.

Antarctic Bottom Water helps influence global ocean circulation patterns and is thought to modulate the transfer of heat and carbon dioxide between the oceans and the atmosphere. Such dense water accounts for up to 40 percent of the global ocean mass, but its formation process is not well understood or captured by computer models.

“This water is formed mainly after sea ice is produced during the winter,” Roquet said, when a lot of salt from sea water is released into the sea water as it freezes, thereby producing extremely dense water that then sinks to great depths.

The seal research benefited an interdisciplinary group of researchers. Biologists like Costa, for example, learned more about the behavior of the seals, while physical oceanographers like Carl Wunsch of MIT, got their first peek at the structure of underexplored parts of the Southern Ocean. 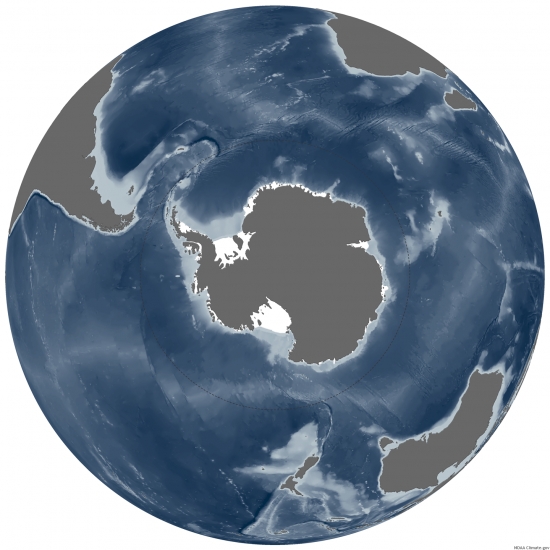 The Southern Ocean forms a ring around Antarctica (dotted line), and is connected to the global ocean circulation.
Click image to enlarge. Credit: NOAA.

“The elephant seals give us data where we had almost nothing before,” Wunsch said in an interview. According to him, the data helped to determine if the model’s estimates of Southern Ocean dynamics are anywhere close to reality. As it turns out, the seal-derived data verified some aspects of the model simulations, but showed deficiencies in others.

“If you don’t actually know what’s going on you don’t have any idea whether the calculations you’re making have any skill at all,” Wunsch said.

Of the seals, Wunsch said, “They go places where you do want data and you can instrument them without harming them.”

He said they are not perfect scientific platforms though, since scientists are especially interested in what is going on near the bottom of the ocean, and the seals don’t dive quite that deep. “I wish the elephant seals would dive deeper. I really would like them to go to the bottom, which they don’t do,” Wunsch said.

In order to advance the scientific understanding of Antarctic Bottom Water formation, Wunsch said, it is important to get observations in the right place at the right time, such as beneath the Antarctic winter sea ice pack and in open ocean areas called polynyas that can form within the ice cover. That may ultimately require a different animal-based platform, if one can be found.

“I’m waiting in some ways for the biologists to come up with another animal” to use for obtaining data, Wunsch said. “I have no idea if that’s feasible.”

In the meantime, researchers plan to continue to use the seals for research in the Southern Ocean, with a forthcoming study using tag-based data to detail the region’s biological productivity, such as the amount of plankton and algae present at various depths. Currently, satellites can only detect such sea life at the surface of the ocean, giving little indication of how populations change underneath.