Here’s what we know: Carbon dioxide is building up in the atmosphere as the result of manmade emissions, trapping more and more heat and warming the planet. Here’s what we’re still working on: Of the excess CO2 that doesn’t stick around in the atmosphere — about 60 percent of it — exactly how much gets pulled into various so-called carbon sinks, such as the world’s oceans and forests, and where exactly the main sinks are located. 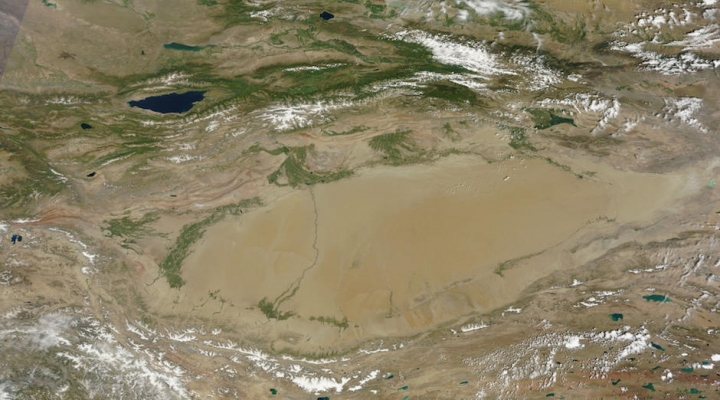 The Tarim Basin, seen in this August 2011 image taken by NASA's Terra satellite, lies in the westernmost part of China and is home to the Talikmakan Desert, the hottest, driest and biggest desert in the country.
Click image to enlarge. Credit: NASA

It’s fairly well established that about 30 percent of atmospheric CO2 is pulled into the oceans, and it is thought that another 30 percent is sucked up by land-based ecosystems. But the estimates of how much various forests, grasslands and other systems take in doesn’t quite add up — there seem to be some missing sinks. A new study has a somewhat surprising candidate that could fill at least some of that gap: large aquifers below the world’s deserts.

Understanding what systems pull in CO2, where they are located and how much they siphon from the atmosphere would help scientists better model the future effects of warming around the globe. To that end, researchers have been monitoring CO2 uptake and release both from the ground and from space.

The new study looked at how much CO2 was being absorbed by irrigation waters on the fringes of the Tarim Basin desert in the Xinjiang region of China, as it seeped through the soil and into the underground aquifer, where it can be permanently locked away.

“The carbon is stored in these geological structures covered by thick layers of sand, and it may never return to the atmosphere,” study author Yan Li, a desert biogeochemist with the Chinese Academy of Sciences in Urumqi, Xinjiang, said in a statement. “It is basically a one-way trip.”

Li and his colleagues sampled water that drains from mountains into the basin, measuring how much carbon was in each sample and the age of the carbon, which told them how long the water had been in the ground. They discovered that the amount of carbon in the water doubles as the water moves through irrigated fields; crops absorb CO2 from the atmosphere and transfer the carbon into the soil, where it dissolves into groundwater during its journey to the aquifer that underlies the desert area. 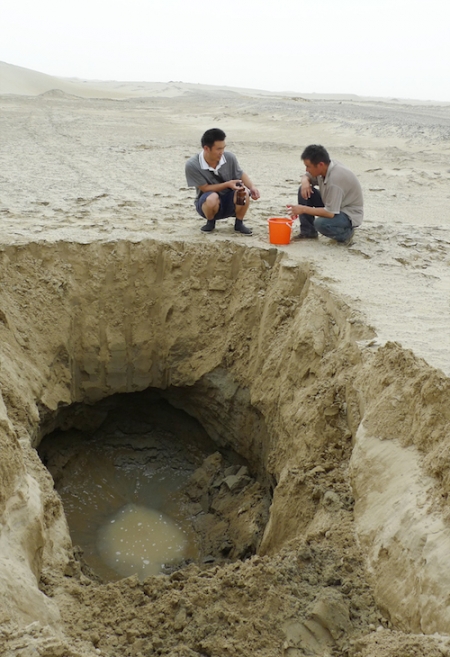 While this carbon burial process occurs naturally, the age of the carbon in the water told the researchers that the process picked up when farming began in the region, about 2,000 years ago. About 12 times more carbon than previously thought could be flowing into the aquifers thanks to the influence of over-irrigation in the arid region (necessary to flush out the salts that can otherwise build up in the soil), they found. The results are detailed in a study accepted for publication in the journal Geophysical Research Letters.

Based on how the rates of carbon burial have happened in this region over history, Li and his colleagues estimate that the aquifer (which contains 10 times the amount of water as the Great Lakes) holds about 22 billion tons of carbon. By comparison, the the world emitted about 32 billion tons of CO2 in 2014.

Underground aquifers have been eyed as a way to artificially store some of the extra CO2 that has accumulated in the atmosphere, because “you can dissolve a lot of CO2 in water,” and it stays put, unlike plants, which eventually decompose and release CO2 back into the atmosphere, Ken Davis, a Penn State atmospheric scientist and member of NASA’s OCO-2 mission, a satellite effort to pinpoint carbon sources and sinks, said.

If the process identified in the new study happens in the same way at other regions around the world’s deserts where agriculture and over-irrigation are present, the process could account for the storage of about 1 trillion tons of carbon, the authors estimate.

Right now, though, that’s a big if, said Davis, who was not involved with the study. It would take more research in other desert areas to see if aquifers there are acting in the same way. And while the amount the researchers estimate is locked up under the Tarim Basin makes “a significant sink,” he said, it doesn’t fully close the gap.

“It could be an interesting piece of the picture; it’s not the picture,” Davis said.

Editor's note: This story was updated to correct the comparison to 2014 emissions, which came from the whole globe, not just the U.S.

You May Also Like:
Hawaii May Say ‘Aloha’ to More Hurricanes
Heat Continues to Roast West, Fueling Drought, Blazes
All of 2015’s Rain for the U.S. in 14 Seconds