Former Vice President Al Gore stood before a crowd of renewables investors, analysts and clean energy industry executives and declared the electric power grid in the U.S. as much of a technological dinosaur as landline telephones.

Gore, speaking in New York City at the Bloomberg New Energy Finance Future of Energy Summit, asked those in the crowd to raise their hands if they had gotten rid of their landline telephones in favor of a cell phone. Hands went up all over the room. 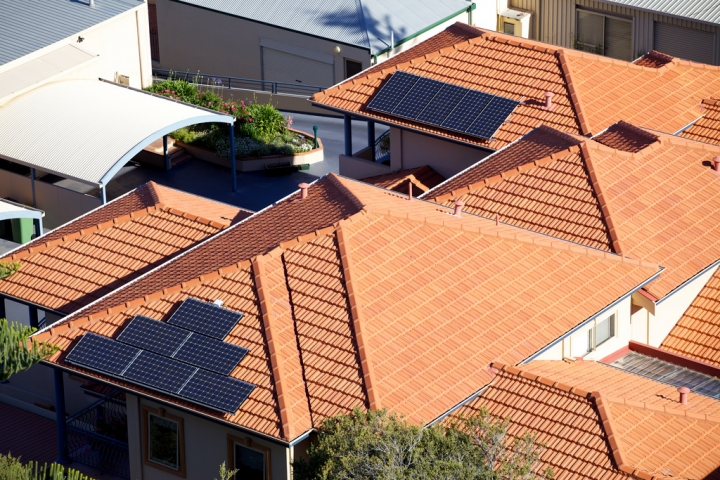 There is broad disagreement about whether rooftop solar could lead homeowners to “defect” from the power grid. Credit: Duncan Rawlinson/flickr

“We’re not far off from the day when I can ask you how many of you no longer have a grid connection,” Gore said, referring to the link between a home and the power lines outside.

The industry name for cutting the wire between homes and power lines is “grid defection,” and it’s controversial because there is broad disagreement about whether it’s both possible and sensible.

As Gore sees it, homeowners in a changing climate are soon going to find it so cheap and easy to generate and store their own electricity that they’ll be able to treat their electric utility like Ma Bell and go totally off-grid, cutting the power cord forever. And if a home generating its own electricity with solar panels and batteries isn’t connected to the grid, the home isn’t culpable for any of the carbon dioxide and other greenhouse gases that spew from natural gas power plants or coal-fired power plants — the globe’s largest contributor to climate change.

“There’s just been so much buzz around this term ‘grid defection,’ about how everything we know is going to change,” Bloomberg New Energy Finance associate Logan Goldie-Scott said at the summit. “Even Al Gore on Monday stood up and sort of boldly proclaimed that in the same way we no longer use land lines, we will no longer have a grid connection in our home. It's a statement we very much disagree with.”

A 2014 Rocky Mountain Institute report on grid defection suggested that by 2020 in some parts of the U.S., especially Hawaii, California and New York, the cost and reliability of a home or business fully powered using a self-contained solar photovoltaic and battery system is quickly approaching “grid parity.” Grid parity is when the cost and reliability of that solar panel system is about the same as that of buying electricity like most people do today — from the local utility’s power grid.

The equalized cost of generating electricity on a rooftop, the report said, may lead many people to “defect” from the power grid. When that happens, utilities lose revenue, and their power plants may become obsolete. The answer to that, the report says, is for utilities to change their business model and prove to their customers that the larger power grid could be better and more reliable than a home fully reliant on solar panels and batteries.

The Rocky Mountain Institute followed its grid defection analysis with a new report this month saying that, more than likely, only a few people will choose to take their solar panels and run from their utility.

Instead, far more people will decide to install solar panels and batteries while remaining linked to the power lines. That way, homeowners will be able to install smaller and cheaper solar power systems while being able to use electricity from the grid only as backup, reducing the electric power demand, or load, on the utility’s grid. That reduction in a utility’s electricity demand thanks to rooftop solar is called “load defection.”

Bloomberg analysts and even some in the solar business are a little dubious about the public defecting from their power lines, partly because homes will need very large batteries to make going off-grid feasible.

“The only thing you can get out of defection is a sense of independence,” Bloomberg New Energy Finance chairman Michael Liebreich said. 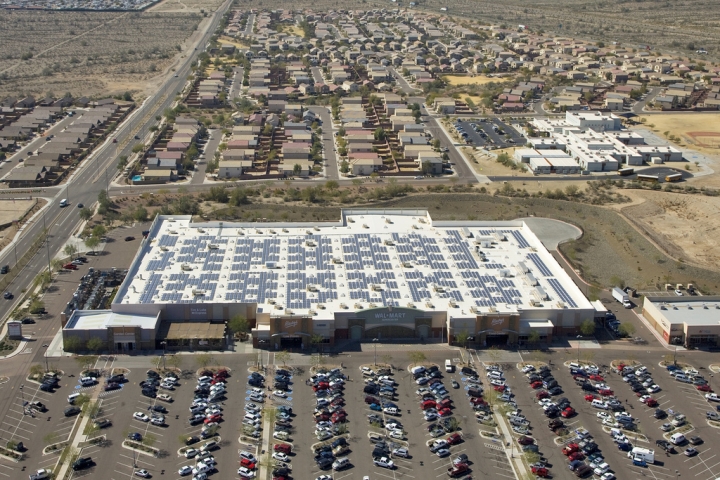 Some analysts say large businesses and big box stores, such as this Walmart powered using rooftop solar panels in Buckeye, Ariz., are the most likely to be able to manage their own power generation and be able to fully go off-grid in the near future. Credit: Walmart/flickr

Keeping a grid connection means keeping the lights on when your inverter breaks or the sun doesn’t shine for long periods of time and having the ability to sell unused power back to the grid, he said.

“You will the rest of the year produce a surplus,” Liebreich said. “You need to sell that and you need a wire.”

Ken Munson, CEO of California-based Sunverge Energy, a firm developing software that aims to help integrate solar power systems and battery storage systems into the power grid, said during the summit that the grid serves a public good, and a more effective way for utilities to adapt to rooftop solar is to find ways to generate revenue from integrating those solar panels into their system.

Katherine Hamilton, a partner at 38 North Solutions, a clean energy public policy firm based in Washington, D.C., said that there is ample opportunity for some businesses to effectively defect from the grid.

“I’m a little mixed on it,” she said. “There’s a big opportunity for (university) campuses, for Department of Defense installations, but also large big box stores and data centers to be able to manage their own systems. On the residential side, we’re not ready for that.”

One reason is that some companies see homeowners as being too comfortable with their utility to quit it completely, Cory Byzewski, general manager and solar program leader of Direct Energy Services, said.

“Despite what we see again and again that most customers don’t like their utility, almost all customers trust their utility,” he said, adding that customer trust means the grid won’t become obsolete anytime soon.