There’s a Hopeful Message Hidden in These Dead Reefs

That’s how Kim Cobb, a scientist at Georgia Tech, described what she saw on a recent dive on the reefs surrounding Christmas Island. She’s studied them for the better part of two decades and what she saw this April was something she had never seen before. 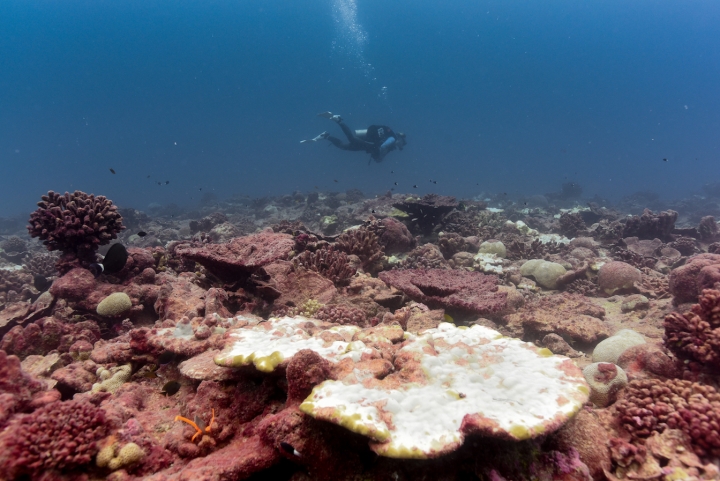 Once vibrant reefs, some of the most pristine on the planet, were almost completely dead. Brownish red algae was draped across them like a funeral shroud. Hot water brought on by one of the strongest El Niños on record — layered on top of climate change-driven warming — was simply too much for the reefs to take.

There were exceptions, though — tiny pieces of baby coral that are beating the odds. And those exceptions could give scientists insight into how to make sure climate change doesn’t completely destroy reefs around the world.

“This is a race against time for coral reef biologists around the world to understand what makes certain corals able to survive,” Julia Baum, a coral researcher at the University of Victoria, said. “If we can understand that, then we can start to develop targeted solutions to preserve corals throughout the next century of climate change.”

Cobb and Baum have both been studying the reefs at Christmas Island, which are at the epicenter of a global coral bleaching event. Reefs in every ocean basin have experienced die off including even the Great Barrier Reef, the world’s largest living organism.

But Christmas Island’s reefs have seen the worst of it. Their location in the middle of the Pacific puts them smack in the middle of El Niño’s hottest water. Water temperatures there reached as high as 88°F (31°C) or about 6°F (2.3°C) above normal this winter.

After months of being cooked by extremely warm water, around 80 percent of the coral was already dead and another 15 percent was in the process of bleaching by April, according to Baum. Rather than writing a eulogy, the researchers found a sliver of hope in that 5 percent that survived. Well, a nubbin of hope actually.

“There were these little nubbins of color,” Cobb said. “My eye was drawn to them and my hopes and heart were drawn to them.”

Those nubbins were baby coral, a few years old at most, sticking out like the most beautiful of sore thumbs among the devastation. They represent the future of reefs not just at Christmas Island but around the world. That’s because they’re the corals that are best-equipped to deal with rising temperatures. 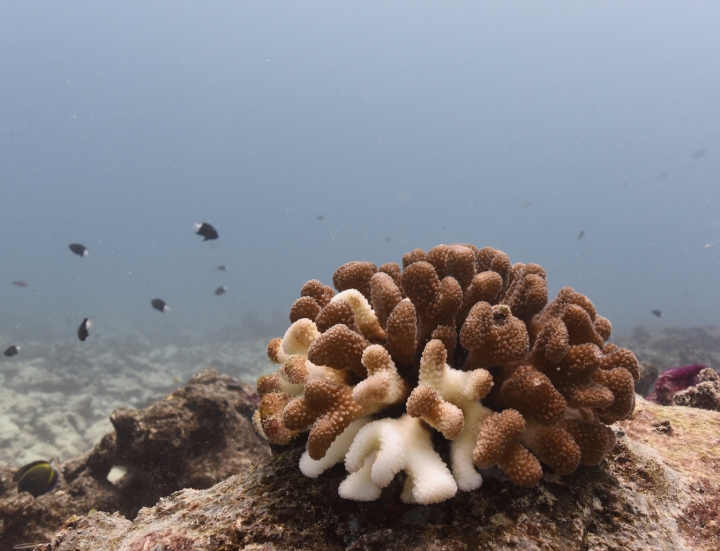 One of the last living Pocillopora coral colonies on Kiritimati Island is now succumbing to El Niño warming. It is starting to bleach on some branches, which can spread through the rest of the coral, followed by death within the next three months.
Credit: Danielle Claar/University of Victoria

“This was a threshold crossing event very few individuals made it through,” Cobb said. “We’re really interested in understanding who is coming back and how well are they able to thrive and and what the role of these resilient little miracle corals is. This is basically adaptation on speed.”

In addition to Cobb’s nubbins, Baum and her group also found survivors on some of the 200 dives they did. On the surface, there’s not necessarily an obvious rhyme or reason for why certain coral species survived let alone individual colonies.

Baum has taken her samples back to the lab and has already started doing chemical and biological analyses to figure out what helped these coral beat the heat. Whatever she finds will have implications that reach well beyond Christmas Island’s remote shores.

The findings could help scientists create super corals that are adapted to future warmer waters. It’s a process called assisted evolution, and it’s highly controversial in the marine conservation field where protected areas are viewed as the gold standard for keeping ocean species safe from the ravages of climate change, fishing and other human actions. But after witnessing what happened at Christmas Island, Baum thinks it could be essential if we want coral in our future.

“Marine protected areas are not immune to climate change. Blind faith that they will protect coral from the types of hot water events we just saw is ludicrous,” she said.