The Atlantic got its first hurricane of the season on Thursday when Danny passed the hurricane test with wind speeds in excess of 75 mph and a developed eye. On Friday afternoon, the storm passed the Category 3 threshold, giving the Atlantic it’s first major hurricane and the eastern Caribbean — a region suffering from severe drought — a glimmer of hope that its reservoirs could be filled just a bit.

The major version of Danny is likely to be short-lived, though. The storm is forecast to weaken and make landfall somewhere between Martinique and Anguilla in the eastern Caribbean on Monday morning. Eventually, the storm could find its way to Puerto Rico on Tuesday, though by then it will have weakened to a tropical storm.

Danny has faced long odds to reach hurricane status, let alone major hurricane status of Category 3 or greater. El Niño — which tends to create strong wind shear that can tear Atlantic tropical storms apart — has conspired to put a damper on the Atlantic hurricane season to date. The National Oceanic and Atmospheric Administration has forecast a below normal hurricane season, which began June 1, because of the aforementioned El Niño, which has continued to strengthen this summer. 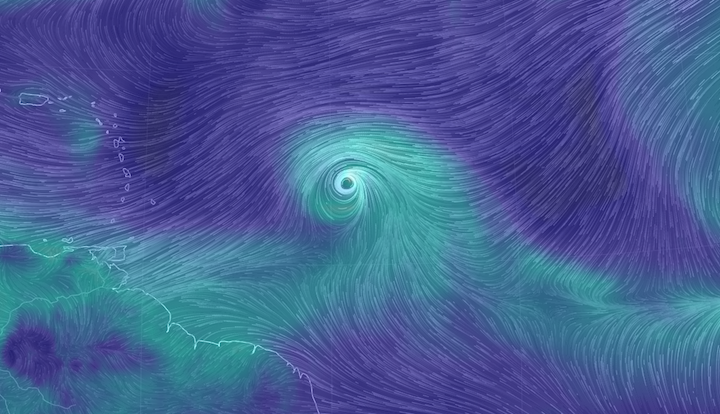 The Caribbean is also currently home to a pocket of dry air that stretches to the Sahara. The dry air is likely to rob the storm of moisture it would need to intensify further and with still drier air in its projected path, it’s likely to weaken through the weekend.

Despite Hurricane Danny's deficiencies, it’s been the little hurricane that could. For parts of the Caribbean, it could be a both a blessing and a curse. While damage is possible from Danny’s winds and rains, the eastern Caribbean also happens to be experiencing an intense drought so a little rain isn’t necessarily a bad thing. Forecasts show that parts of the eastern Caribbean could receive up to 8 inches of rain by Wednesday night.

Puerto Rico recently turned to water rationing to conserve what little is left in its parched reservoir system.

“Much of the eastern half of Puerto Rico is 20+ inches below normal for just 2015, that does not take into account any deficits from 2014,” Brian Fuchs, an expert at the National Drought Mitigation Center, said. “Danny may bring a good shot of rain, but we will have to consider the response of reservoirs, rivers, streams (and) groundwater as well.”

Rainfall deficits in the eastern Caribbean from January through July.
Credit: International Research Institute for Climate and Society

Other island throughout the region are also suffering. Reservoirs have completely dried up in Antigua, forcing the tiny island nation and to rely almost completely on desalinated water. So with El Niño conspiring to keep the region dry through the fall and winter, Danny could be just what the meteorologist ordered to provide some relief.

Danny's arrival as the first hurricane of the season is just about normal. According to Brian McNoldy of the Capital Weather Gang, the median date for when the first hurricane forms is Aug. 16. The timing of the first storm isn't indicative of how active a season will be. Last year, Hurricane Arthur formed on July 1 and rained out fireworks displays across the Mid-Atlantic. Despite the early start, 2014 ended up being a relatively quiet season with only eight named storms. That's the fewest since 1997.

You May Also Like:
El Niño Could Rank Among Strongest on Record
Hawaii May Say ‘Aloha’ to More Hurricanes
The Climate Change ‘Bully’ in California’s Drought