The U.S. Army Corps of Engineers is cancelling an environmental review of the Dakota Access Pipeline and will grant approval of an easement that allows the final link in the pipeline to be constructed.

The decision on Tuesday makes good on President Trump’s executive order advancing the controversial project, which has been the subject of months of protests at the construction site in North Dakota.

The Obama administration shelved or postponed both the Dakota Access and Keystone XL pipelines because of public outcry about their environmental, cultural and climate impacts.

Though they will tap different oil fields, both pipelines will have a measureable effect on the climate because they will make it cheaper and easier to send crude oil to refineries — fuel that will reach consumers’ gasoline tanks in the U.S. and abroad.

In the U.S., the use of crude oil for transportation is now a larger source of the carbon dioxide emissions driving climate change than electric power generation, which has long been the country’s largest source of climate pollution.

“Anything that makes extraction and transportation of oil easier and cheaper like building more pipelines to landlocked high-emissions oil sands, makes it harder to achieve that goal,” he said.

Trump has said he supports the construction of the Dakota Access and Keystone XL pipelines in addition to the full-scale development of public lands for oil and gas as a way to create jobs, ensure U.S. energy independence and rid the country of federal regulations that he and many other Republicans find burdensome.

“The national security of the United States is enhanced because of low-cost petroleum,” Rick Perry, Trump’s Energy secretary nominee, said in written testimony to the U.S. Senate in January.

When completed, the Dakota Access Pipeline will ship up to 570,000 barrels of crude oil 1,172 miles every day from the Bakken shale oil fields of western North Dakota to an oil depot in southern Illinois.

Members of the Standing Rock Sioux tribe began protesting the construction of the pipeline last fall because of the potential for oil spills to contaminate Missouri River water and cultural sites near their land, and because of the role of oil in causing climate change. 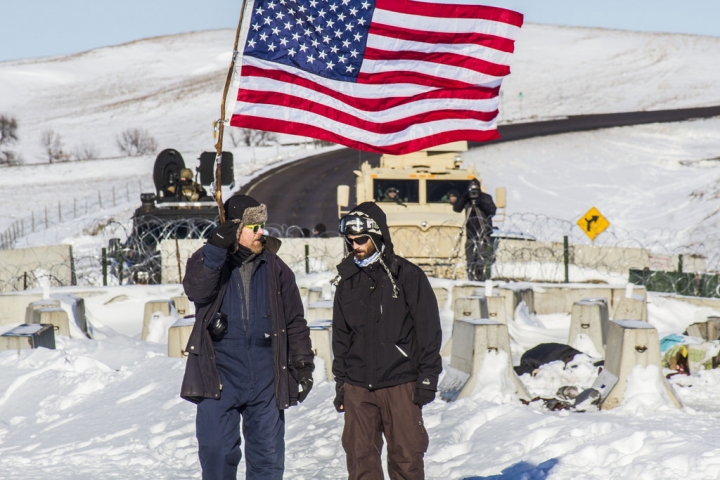 A road blockade near the site of protests against the Dakota Access Pipeline.
Credit: Dark Sevier/flickr

In response, the Obama administration in December declined to grant an easement for a leg of the pipeline to cross beneath a lake on the Missouri River straddling the North Dakota-South Dakota border, effectively halting construction.

In the last days of the Obama administration, the Army Corps promised an environmental review of the pipeline’s route, but on Tuesday, the Corps heeded Trump’s order by cancelling the review and issuing the easement.

Robert Speer, acting secretary of the Army, said in a statement that there was already sufficient information to support the Army Corps granting the easement and allowing construction to continue.

Environmental groups and the Standing Rock Sioux tribe vowed to challenge the decision in court.

“The drinking water of millions of Americans is now at risk,” Standing Rock Sioux Tribe Chairman Dave Archambault II said in a statement. “Americans have come together in support of the tribe asking for a fair, balanced and lawful pipeline process. The environmental impact statement was wrongfully terminated.”

A spokesperson for Energy Transfer Partners, the pipeline’s primary developer, did not return calls seeking comment.

The Trump administration’s decision to complete both the Keystone XL and Dakota Access pipelines symbolizes America’s renewed commitment to fossil fuels and is a rebuke of the Obama administration’s climate change policies.

Established science shows that the use of fossil fuels, including coal, crude oil and natural gas, are the primary cause of global warming. Rising temperatures caused by burning those fuels are expected to threaten the lives of millions as coastal cities are flooded by rising seas, severe heat waves and drought become more common, and extreme weather such as hurricanes and tornadoes become more violent.

The Trump administration has so far favored industry—and in this case, the fossil fuel industry—while rejecting climate science and the Obama administration’s policy of supporting renewables and low-carbon alternatives to fossil fuels.

Obama rejected Keystone XL partly because his administration believed the U.S. needed to show global climate leadership by committing to renewables and natural gas instead of Canadian oil sands, which are among the dirtiest fossil fuels on earth. The production of oil sands, or tar sands, emits at least 17 percent more carbon dioxide per barrel than conventional oil produced elsewhere.

The Keystone XL pipeline would primarily send carbon-laden Canadian oil sands from Alberta, Canada, to refineries in Texas, while also tapping into North Dakota’s Bakken shale oil fields. In 2015, the Obama administration declined to issue a permit for the Keystone XL’s construction partly because of oil sands’ effect on the climate. 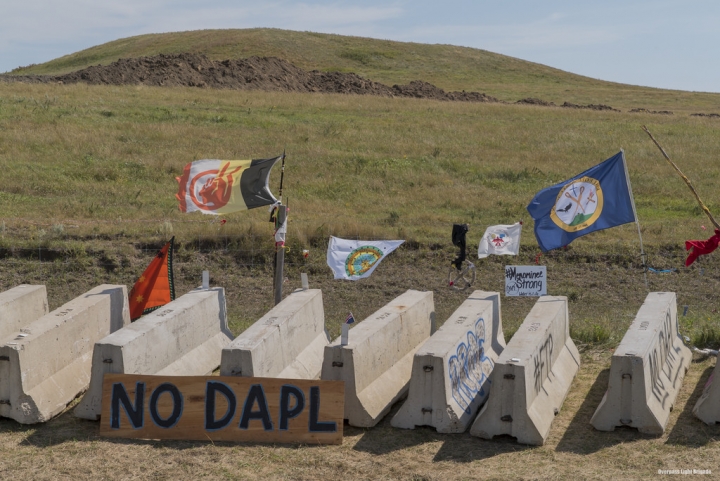 Though the Canadian oil sands, which are expensive to mine and ship, are currently struggling at a time when oil prices are low, new pipelines could help make it profitable for companies to tap the sands as well as shale oil in North Dakota, said Peter Erickson, senior scientist at the Stockholm Environment Institute in Seattle.

“Were new pipelines to provide a relatively certain, lower cost way to get oil to market, they could absolutely tip many future oil fields into pencilling out in investor eyes, and therefore going ahead,” Erickson said. “Bottom line: In the current oil price environment, pipelines could matter a lot for Bakken (and) oil sands investment and future production.”

“The Keystone XL pipeline would shorten the route of the current pipeline and allow increased capacity in the system,” Spinti said. “Building the pipeline indicates a long-term commitment to moving oil from Canadian oil sands to the U.S. market, and many people who are concerned about climate change do not want to see that type of commitment.”

Danny Cullenward, an energy economist at Stanford University, said the Keystone XL and Dakota Access pipelines are likely to increase oil production because the costs of shipping oil via pipeline are lower than shipping oil via rail or truck, two of the primary modes of transport for Bakken shale oil and Canadian oil sands today.

The Obama administration’s rejection of the pipelines wasn’t merely symbolic because additional greenhouse gas emissions from tapping such large sources of oil are likely to make it difficult to keep global warming from exceeding 2°C, Cullenward said.

“The total emissions that would come from long-term exploitation of the oil sands are not inconsequential in global terms, and therefore activists who believe they are stopping that long-term trend are consistent in claiming the significance of their actions in climate terms,” he said. “If that’s where you draw the line in the sand, then it’s not mere symbolism to oppose these pipelines.”

You May Also Like:
The West’s Largest Coal Plant May Close. It’s a Big Deal.
Women Scientists Advocating for Equality Surge to 14,000
Climate Change Is the World’s Biggest Risk, in 3 Charts