You can do a lot with $9.7 trillion: buy all the real estate in Manhattan 12 times over, purchase 22 carbon copies of Apple, or an absurd quantity of apples.

It’s also the amount of money that tropical cyclones could cost the global economy over the next century, especially if climate projections of fewer but more intense cyclones are accurate. In comparison to those losses, the cost of action to reduce emissions and beef up coastal preparedness is relatively cheap say researchers.

Damage in the Breezy Point neighborhood of Queens in the wake of Sandy.

Humanity and cyclones are no strangers to each other. Roughly 35 percent of the world’s 7 billion people are in the path of cyclones and coastal populations are expected to swell in the coming century. To understand the future damage that cyclones could inflict on ever-growing coastal cities, two researchers looked at 60 years of cyclone and economic data in a recent National Bureau of Economic Research study.

They found that cyclones — known as hurricanes or typhoons depending on the ocean basin in which they form — left lasting impacts on the economies of the countries they hit. In the case of major events, such as 1-in-100 year storm like Hurricane Ivan in 2004, the impacts were worse and longer-lasting than a full-blown financial crisis. If that sounds shocking to you, you’re not the only one who felt that way.

“We didn’t believe what we saw at first,” said Amir Jina, a postdoctoral researcher at the University of Chicago and one of the study’s authors.

Part of the surprise for Jina was the robustness of the results and how they fly in the face of one commonly held thought in economics that disasters can actually give a boost to a country’s economy in the long run.

The losses are essentially hidden in plain sight, spread over long periods of time rather than one big hit. Countries hit by cyclones continue to grow. But the study showed that they are knocked onto a different, slightly lower growth track, like a car switching from a highway’s fast lane to the slow (or at least slightly less fast) lane.

Looking at “lost growth” gives a compelling snapshot of what our world could look like if we lived on a cyclone-free planet. Japan and the Philippines top the list of countries with the most exposure to cyclones. They also happen to have some of the most sluggish growth rates in Asia, but in a world without cyclones, their growth rates would have been on par with China, which has had some of the most torrid growth rates in Asia. The numbers also underscore how cyclones are just one among many factors — from policy to natural disasters to technology advancements — that can affect economic growth.

Even large, wealthy countries like the U.S. aren’t immune to the effects of cyclones on growth. The U.S. lost roughly an average of 1 percentage point of growth annually to cyclones from 1970-2008. That’s essentially $150 billion in lost growth over that period.

Behind the results sit a staggering amount of data crunched.The researchers looked at more than 6,700 storms and nearly 200,000 data points that charted maximum wind speeds of cyclones across the planet.

Kerry Emanuel, a hurricane researcher at MIT, said the study presented a “reasonable model” of accounting for wind speeds at different locations around the world, though he questioned how they arrived at the specific number of cyclones since data before 1980 — the advent of the satellite era — is less reliable. He suggested around 5,300 cyclones would be a more accurate number to work with.

“We knew there was debate about the data but there's literally nothing better (in a positive way – it’s an amazing dataset),” Jina said.

The slightly different storm accounting has minimal impact on the results showing the economic toll, though.

“Everytime you come up with something in your head, that maybe ‘hmm, this could be a problem,’ a page later they’ve tested it,” said Peter Howard, a fellow at the Institute for Policy Integrity.

While the analysis provides a powerful look at the past, it also provides a jumping off point to look at the future. Cyclones are projected to become less frequent but more intense due to climate change, though estimates are still being refined. The northwestern Pacific and North Atlantic basins, in particular, are likely to see that pattern more fully emerge. 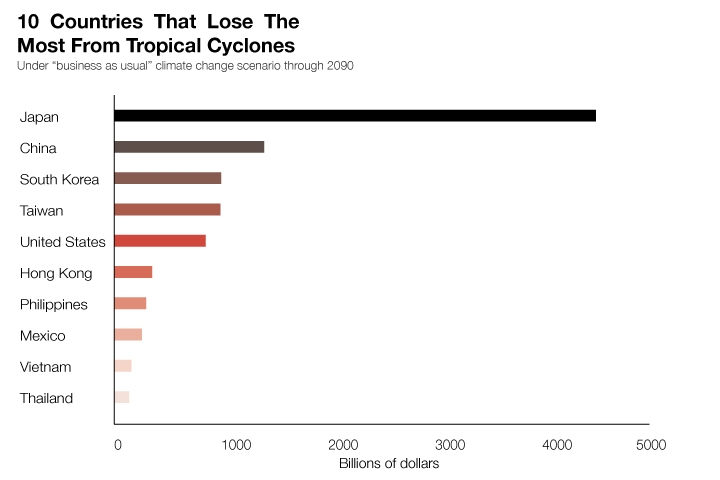 Factoring in those changes, Jina and Hsiang estimate that the cost of cyclones to future generations could total $9.7 trillion by 2090. Countries in the northwest Pacific basin stand to lose the most, with 8 of the 10 biggest losers in that region including Japan, China, South Korea and Taiwan as the most exposed countries. The U.S. ranks fifth, with cyclone activity causing a nearly $900 billion hit on the country’s GDP through 2090.

Those costs are currently missing from researchers’ best estimates of the cost of the world continuing to emit greenhouse gases, known as the social cost of carbon. To compute that cost, researchers consider what changes to the climate will mean for society.

“Its effects of increasing social conflict, health impacts, and sea level rise (which) might cause loss of coastal infrastructure,” said Howard, who authored a major report on the social cost of carbon earlier this year.

The U.S. government currently estimates that a ton of carbon emitted today has a social cost of $37, a number that rises each year as the world gets richer and more infrastructure and people are at risk of the detrimental impacts of climate change. Those costs could, in theory, help set up a policy to reduce carbon emissions, such as a cap-and-trade system. Many, including Howard, have argued that the $37 figure is far too low, and the new study only adds to the argument that inaction on climate change could be an expensive proposition.

In comparison, the cost to reduce greenhouse gas emissions has been estimated at $2 trillion — no small coin but certainly a better deal than the price tag this study, and others like it, put on society taking little or no action.

“We’re discovering a new climate change cost nobody has considered, but this isn’t some kind of new, catastrophic risk,” Jina said. “This is something we already know about.”

You May Also Like:
Where Is El Nino? And Why Do We Care?
2014 Extreme Weather: What Attribution Can Tell Us
Sea Level Rise Making Floods Routine for Coastal Cities
Oceans Getting Hotter Than Anybody Realized