Greenhouse gas emissions from agriculture would be cut by 25-40 percent if Europeans cut their meat and dairy consumption by half, according to a U.N. report.

Scientists from the U.N. Economic Commission for Europe say that as well as cutting air and water pollution, adopting a “demitarian diet” – cutting meat and dairy consumption in half – would lead to a 40 percent cut in Europeans' intake of saturated fats. 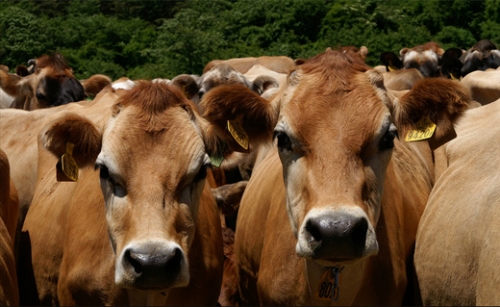 Greenhouse gas emissions from agriculture would be cut by 25-40 percent if Europeans cut their meat and dairy consumption by half, according to a U.N. report.
Credit: American Committee for KEEP/Flickr

The vast majority of saturated fats come from animal products that can lead to cholesterol problems and obesity, and such a cut would bring levels to within a range recommended by the World Health Organization.

Professor Mark Sutton, one of the authors who coined the term demitarian and is one himself, said despite powerful farming lobbies it was not “pie in the sky” to envisage such a cut in meat consumption. But he said the team was not taking a position on how best to encourage people to change their food habits.

“When we've seen people urged to be vegetarians I've personally seen that that can lead to a backlash because many people want to eat meat. From the environmental point of view, it's not about whether you eat meat or dairy, it's about how much,” he said in London on Thursday.

The report, Nitrogen on the Table, examined the impacts that changes in consumer food habits would have on nitrogen emissions from livestock. It said a 50 percent cut in meat and dairy intake would cut greenhouse gas emissions by 25-40 percent depending on what the freed-up land was used for. The amount of imported soybeans, mostly used to feed livestock, would fall by 75 percent.

The taskforce concluded that the amount of nitrogen lost into the wider environment – into the air and into water – was 25 times higher per unit of food protein from beef than for cereals.

Nitrous oxide is one of the most powerful greenhouse gases, far more potent than carbon dioxide. Nitrogen releases from agriculture have other negative environmental effects, mixing with emissions from cars to create tiny particulate pollution that is harmful to humans. When it runs off farmland into rivers it can end up in the sea and cause algal blooms.

A dramatic reduction in meat and dairy farming – which would meet strong opposition from farming bodies in the UK – would also free up land either for growing cereals or biofuels, the U.N. team said.

“The EU could become a major exporter of food products, instead of a major importer of, for example, soybeans,” said Henk Westhoek, the report's lead author and program manager at the Netherlands Environment Assessment Agency. 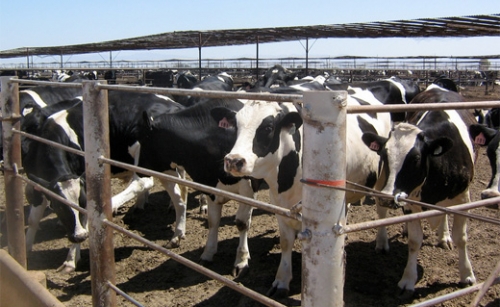 Cutting meat and dairy consumption in half would also lead to a 40 percent cut in Europeans’ intake of saturated fats.
Credit: Shinichi/Flickr

But he admitted that dramatically reducing cattle farming would not in all cases free-up land suitable for growing cereal crops instead. “It would not be favorable to take out all the beef production because then we cannot use all our natural and semi-natural grasslands,” he said.

Dr. Diane Mitchell, chief environment adviser at the National Farmers Union, said: “Farmers and land managers have already taken great steps to reducing its use through better management and efficiency – in fact, its use is down significantly over the past 20 years.

“Eating less meat is a simplistic solution to what is a highly complex situation. Agricultural production in the UK is currently responsible for around 10 percent of total UK greenhouse gas emissions and the British livestock and dairy sectors are already doing much to tackle their greenhouse gas footprint. And it mustn't be forgotten that meat and dairy products are an important component of a healthy, balanced diet.

She added: “Further, the view that agricultural land should be taken away from livestock for other produce is nonsensical – some of this land can only be used for pasture and at the same time goes some way to protecting our wonderful countryside.”

“I would posit a hypothesis that if Europe were to make such a change that would have such cultural ripples that it would have interactions with other parts of the world. Nobody can tell the Chinese or anybody else what they should be doing but if we were to change our culture, that would have a ripple, it would be an incredible sea change,” he said.

The executive summary of the report was published on Friday, with the full report following next month. It follows a major assessment in 2011 by the same team, which concluded that the annual cost of nitrogen pollution was in the region of $104 billion - $474 billion.

A spokesperson for the Department for Environment, Food and Rural Affairs said: “We're working with farmers to reduce greenhouse gas emissions, and we recently launched a $7.6 million initiative to help farmers become more environmentally sustainable. We're also four years into an ambitious $20 million research program to improve our understanding of how we can reduce the impact of agriculture on emissions.”