On May 24, a roiling dust cloud enveloped a desolate stretch of road in Prowers County, a rural county in southeast Colorado. The county and surrounding area had been deeply mired in drought for more than 2 years and the photo bore proof of just what drought looked like to its residents.

The short note accompanying the photo added more context: “Photo taken on 5/24/13, but any given week in the last 3 months we've had these dust storms.” 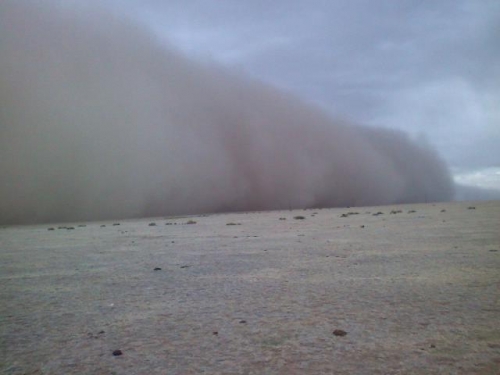 The image is one of thousands that scientists are collecting in a crowdsourced database. And it,  and others like it, are providing valuable clues about what drought actually looks like on the ground. This weekend, anyone can go out and take a photo and contribute to the growing body of knowledge.

“We do a lot of work with the Drought Monitor and there’s always a lot of discussion about impacts (of drought) vs. what the indicators are showing,” said Mark Shafer, a researcher who runs the Southern Climate Impacts Planning Program.

The Drought Monitor, which is released like clockwork throughout the year each Thursday for the past 15 years, provides a snapshot of drought in the U.S. Scientists rank drought in five categories, from the worst — exceptional drought — to the least severe — abnormally dry. They base those rankings on analytical measures, such as soil moisture or recent temperatures as well as anecdotal evidence, and occasional visits to the field. However, to classify a drought is one thing, to really understand how people experience it is another.

That’s why Shafer got the idea to start Field Photo Weekend over Labor Day weekend in 2012. The initial effort tapped volunteers of the Community Collaborative Rain, Hail and Snow Network (the awkwardly acronymed but fun to say CoCoRaHS) to take photos near their homes of fields, trees, ponds or any other non-paved landscape.

Rather than seeking out the saddest-looking patch of grass in an otherwise green field or a vibrant tree in the middle of a dessicated forest, Shafer and his team are looking for scenes that capture the average state of things. Users can then upload them with a short note using an iPhone or Android app. All the photos are publicly available so anyone can access and use them how they like.

Since the first iteration, Shafer’s group has added Memorial Day and Presidents Day weekends and enlisted the public to participate. That not only means more geographical coverage, but also the chance for a series of images to emerge showing the ebb and flow of drought in places with multiple photos over longer periods of time.

While the results are images that won’t garner too many likes on Instagram, they provide rich data for scientists to scour. Shafer said the photos have been useful in a handful of cases for improving the accuracy of the Drought Monitor. He said the southeast Colorado picture and note is the most striking example.

Shafer compared the photos to the Dust Bowl of the 1930s, saying, “It looked like a colored version of those old pictures. That highlighted the severity in southeast Colorado. There’s still a spot in southeast Colorado (of extreme drought) and it’s really from those pictures. It’s a good check on telling us that, well, we have a long ways to go to recover.”

Photos taken this weekend in California could provide simlarly valuable clues about the withering drought currently plaguing the state.

Using the photos as spot checks for the Drought Monitor also point to much bigger usages. As the database grows and contributors add photos season after season, a clearer snapshot of what drought and recovery look like should begin to emerge. And that will help researchers further refine their understanding of the complex topic.

You May Also Like:
Can Birds Be Protected From Huge Solar Plants?
Antarctic Riddle: How Much Will the South Pole Melt?
Visualize It: Old Weather Data Feeds New Climate Models
Epic Drought in West is Literally Moving Mountains