To wind farm opponents, wind turbine syndrome is a manifold malady triggered by acoustic pulses and other unfortunate side effects of large wind turbines. To wind farm developers, syndrome claims can mean stomach-churning marches into courtrooms and municipal hearings, where legal teams defend projects against allegations they’re responsible for everything from headaches and sleeplessness to vertigo, blurred vision, and forgetfulness.

In these legal fights, the wind energy developers are winning. To the judges presiding over the cases, evidence that wind turbine syndrome exists has seemed as wispy as the cirrus clouds that can herald a stiffening breeze. 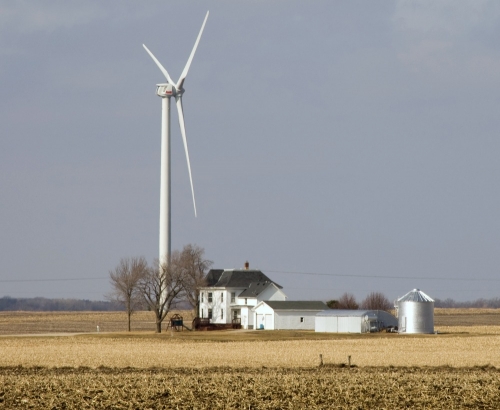 The Energy and Policy Institute, a clean energy advocacy group, reviewed rulings from 49 lawsuits and similar complaints filed in five Western countries. In a report published last week, the group says it could find just one case of a court siding with neighbors who claimed wind turbines had made them ill. That one ruling out of 49 is being appealed in Massachusetts.

“These claims about wind turbines causing health impacts are not being upheld, which means there isn’t sufficient evidence to prove that wind turbines cause any problems with human health,” said Gabe Elsner, the nonprofit’s executive director. “That’s a big deal, because claims about that are used across the globe by anti-wind advocates to try to slow the development of wind farms.”

The 49 legal rulings identified by the institute came out of environmental, utility, civil, and higher courts since the late 1990s in the U.S., Canada, New Zealand, Australia, and the U.K.

Elsner said the study began, in part, to provide wind developers’ attorneys with ideas and legal precedents to help them defend projects in court. “These claims about health impacts kept coming,” he said.

Of the eight American cases, the one instance where neighbors succeeded in hobbling wind turbine operations was in the Cape Cod town of Falmouth, Mass. A government board sided last year with neighbors, including a Vietnam War veteran recovering from PTSD, who said they were sickened by a pair of town-owned wind turbines. The turbines were installed in 2010 to power a wastewater treatment plant and to sell excess electricity onto the local utility’s grid. 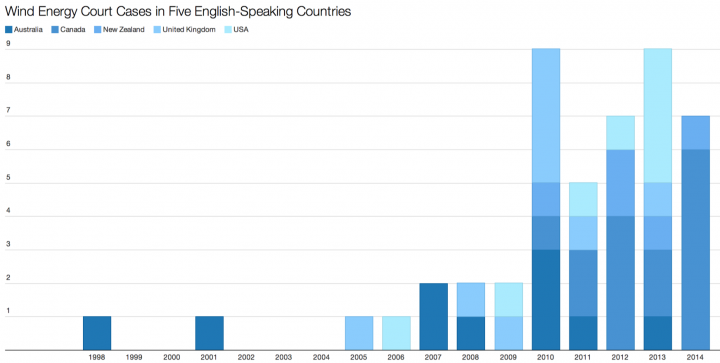 The turbine blades are being locked down every night from 7 p.m. to 7 a.m., and all day on Sundays and some holidays, while the town appeals the ruling in superior court. “We borrowed money to pay for these things, and we need that money to pay the bonds,” Town Counsel Frank Duffy said.

The Energy and Policy Institute and others trace claims of far-reaching health problems associated with wind turbines to 2009, when an American pediatrician published a book that popularized the phrase “wind turbine syndrome.” But scientists who have examined the claimed links between wind turbines and health problems have almost universally rejected them.

“Of course wind turbines make noise, and we all know that noise can be annoying,” said Melissa Whitfield Aslund, a scientist at the Canadian consulting firm Intrinsik, whose clients include wind energy developers. “Once sited properly, where you have appropriate noise regulations in place, and where people aren’t being exposed to excessive amounts of noise, there’s no direct evidence of adverse effects on human health.”

Whitfield Aslund collaborated with six Intrinsik colleagues to review nearly 60 studies dealing with the the health effects of wind turbines. The review, which was published in June in the journal Frontiers in Public Health, includes recommendations for protecting neighbors from the noise impacts of wind turbines, such as considering local conditions affecting how far sound travels when siting wind turbines—not just measuring the distances to the nearest home. The report says the nocebo effect, in which a patient can be convinced that something benign is making them sick, could be responsible for many of the health complaints associated with wind turbines. So, too, the scientists wrote, could be the annoyance and worries that some people experience when unwanted turbines go up in their neighborhoods. Such emotions in general have been linked by medical researchers to symptoms that resemble those of wind turbine syndrome.

But try telling that to the 19 Lake Winds Energy Park neighbors in Michigan's Mason County who are suing over what they say are reduced properties' values and pain and suffering. Headaches, ringing in the ears, dizziness, stress, “extreme fatigue,” nausea, and a “diminished ability to concentrate” are among the ailments they claim to be suffering because of the constant gyrations of the 56 turbines. Their attorney, Craig Horn, who worked on a similar case in the past, is largely focused on complaints of sleeplesness and headaches.

“The further you get away from sleep disturbance and headaches, the more difficult it is to find sound science to back those up,” Horn said. “I’ve had now 40 indivduals that I've represented, and their lives are markedly different than they were pre-wind farm. It's not like they're suffering from cancer or anything — they're not going to die from it. It primarily can be tied back to sleep distrurbance, and they have a greater incidence of headaches.”

You May Also Like
Hot and Getting Hotter: Heat Islands Cooking U.S. Cities
Here’s How Arctic Sea Ice Could Shrink Even More
July Checks In as 4th Warmest on Record Worldwide
Bike Sharing: How Climate Friendly Is It?
Picture This: Twin Waterspouts and Amazing Aurora
Planet is Running a Temp: State of the Climate 'Check-Up'