The road to a phaseout in the production and use of a rapidly growing and extremely powerful global warming pollutant proved bumpier than expected when diplomats gathered in Bangkok last week for the latest round of ozone treaty talks. For much of this year, momentum had been building behind a U.S.-backed amendment to the Montreal Protocol, which is the 1987 treaty that has protected the planet’s ozone layer from the ravages of ozone-depleting chemicals. 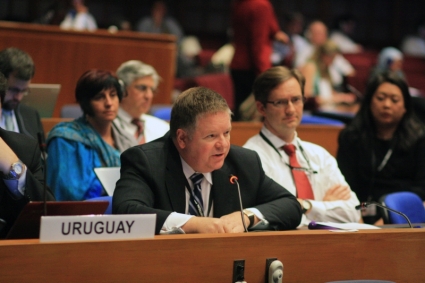 Daniel Reifsnyder, Deputy Assistant Secretary for Environment and Sustainable Development, at the Montreal Protocol Meeting of the Parties in Bangkok, Thailand on Oct. 24, 2013.
Credit: IISD/ENB.

The amendment, sponsored by the U.S., Canada, and Mexico, would phase out emissions of hydrofluorocarbons, or HFCs, which are compounds that contain carbon, hydrogen, and fluorine. HFCs are used as solvents, refrigerants, firefighting agents, and propellants, and were introduced as a substitute for the chloroflourocarbons, or CFCs, that have eroded the Earth's protective stratospheric ozone layer — thereby allowing greater amounts of the Sun's harmful ultraviolet rays to reach the Earth's surface.

Despite high hopes going into the Bangkok talks, negotiators did not move the amendment toward formal considerations after developing countries, led by India, raised questions about the costs and availability of alternatives to HFCs and the viability of tackling global warming within a treaty system designed to handle a different environmental challenge.

India helped block formal discussions of the amendment, and negotiators instead agreed to have the treaty’s technical support team conduct a study of the costs and benefits of reducing HFC use, and hold a workshop on the issue in 2014.

During the past year, a growing number of countries had endorsed plans to reduce HFC emissions through the Montreal Protocol, including the G-20. In bilateral discussions with President Obama, Chinese President Xi Jinping and Indian President Manmohan Singh both expressed a willingness to move forward with HFC proposals. 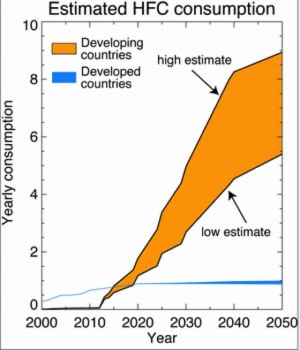 Without cuts in HFC production and use, emissions are projected to skyrocket during the next several decades, mainly in the developing world. By 2050, total HFC usage in developing countries could be as much as 800 percent greater than in developed nations, a 2009 study found.
Credit: NOAA.

Singh’s agreement with President Obama meant that his country’s opposition to the HFC amendment took many by surprise.

“In signaling their willingness to address HFCs in various high-level forums this year, global leaders have made an important statement of intent,” said Clare Perry, a senior campaigner with the Environmental Investigation Agency, a U.K.-based environmental advocacy organization, in a press release.

“Unfortunately, there was scant evidence of this from India in Bangkok this week. We’re struggling to understand how a commitment by Prime Minister Singh barely a month ago has not translated into concrete action,” she said.

While HFCs are not as harmful to the ozone layer as the chemicals they are replacing, they are efficient global warming gases that are hundreds to thousands of times more powerful at heating the planet than carbon dioxide, which is the main long-lived greenhouse gas. In fact, HFC-134a, which is the most popular HFC substitute and is used in vehicular air conditioning systems, has a global warming potential that is more than 1,400 times that of carbon dioxide, the main manmade global warming gas.

Because of their high global warming potential, reducing emissions of HFCs are viewed as a critical part of plans to reduce near-term global warming while negotiations continue within the U.N. to tackle carbon dioxide and other long-lived greenhouse gases.

For more information on the methods behind this interactive, click here.

Policymakers are concerned about HFCs because they are increasingly being used in developing countries, such as China and India, as they turn away from substances banned under the ozone treaty. Right now, HFCs only comprise about 1 percent of global greenhouse gas emissions, but that could grow to 20 percent by 2050 unless action is taken to freeze or reduce HFC emissions. Avoiding the projected explosive growth in HFC use alone could forestall up to 0.2°F of warming by 2050, and up to 0.9°F by 2100, according to Drew Shindell, a NASA climate scientist.

According to figures the U.S. presented at the meeting in Bangkok, a phasedown of HFCs would amount to avoiding more than 90 gigatonnes of carbon dioxide-equivalent through 2050, which is equal to about 2 years of current manmade greenhouse gas emissions.

According to a study published in the journal Nature Climate Change, reducing emissions of a portfolio of short-lived climate pollutants, including soot and methane in addition to HFCs, by 30 to 60 percent by 2050 would slow the annual rate of sea level rise by about 18 percent by 2050. Combining reductions in short-lived pollutants with decreasing CO2 emissions could cut the rate of sea level rise in half by 2100, from 0.82 inches to 0.43 inches per year, while reducing the total sea level rise by 31 percent during the same period, the study found.

Durwood Zaelke, the president of the Institute for Governance and Sustainable Development and a prominent advocate for phasing out HFCs, said incremental progress was made in Bangkok, citing the request for the cost and benefits report as well as the support of African nations for the U.S.-backed amendment. With more countries joining the U.S. position, he said, “The writing is clearly on the wall.”

“A few countries are still trying to delay the final agreement, but it’s now clear that it’s a losing strategy and that the Montreal Protocol will be used to phase down HFCs,” Zaelke said in a press release.

The HFC issue demonstrates how the gridlock within the U.N. climate treaty talks, which are held under the auspices of the U.N. Framework Convention on Climate Change, is encouraging more creative solutions to cutting emissions. In this case, a treaty originally designed for addressing one environmental crisis — the rapid thinning of the planet’s protective ozone layer — is being recognized as having ancillary benefits for another air pollution challenge.

As Daniel Reifsnyder, deputy assistant secretary of State for environment and sustainable development, said in Bangkok: “Nearly every action that the Parties here have taken under the Montreal Protocol to control production and consumption of ozone depleting substances has also produced benefits for the climate system . . . Some would have us draw bright lines between efforts to address climate change and efforts to address depletion of the ozone layer — fortunately, nature won’t let them.”