These Coral Reefs Are a ‘Crystal Ball’ For Future Change

Christmas Island sits about as close to the middle of the Pacific as you can get. The main island of Kiribati, a small island nation, is 3,300 miles from San Francisco, 3,800 miles from Brisbane and just 140 miles north of the equator. Its closest neighbor of note is Hawaii, which is still 1,250 miles away.

Some might say it’s as close to the middle of nowhere as you can get. But it’s at the center of one of the biggest climate events in decades. A super El Niño has raised water temperatures to unprecedented levels and it’s causing a massive coral die off. 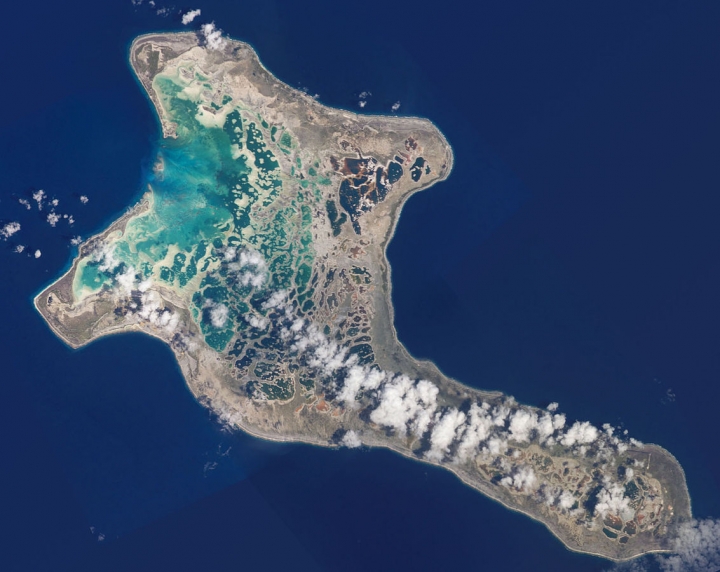 A view of Christmas Island from space.
Credit: NASA

Researchers are racing to track the impacts the warming is having on coral as well as what happens to the reefs when the waters cool. The work has implications well beyond an island in the middle of nowhere. How coral respond to this year’s El Niño offers a preview of what the rest of the world’s coral will face as the world continues to warm.

From the water’s surface, the coral reefs surrounding Christmas Island looked healthy. But as soon as Kim Cobb plunged below the azure waters that surround the world’s largest atoll, a new picture began to emerge on a November dive.

“Everything was structurally intact, the reef looked almost normal,” Cobb, a paleoclimate scientist at Georgia Tech, said. “But all the colors were different. The coral isn’t alive, it’s already dead. It’s an eerie, eerie thing to be in the midst of such a rapid transformation.”

Cobb has worked on the reef for 18 years. The rapid change she saw this year is being driven by El Niño, which has ratcheted up ocean temperatures to record levels in the eastern central Pacific. 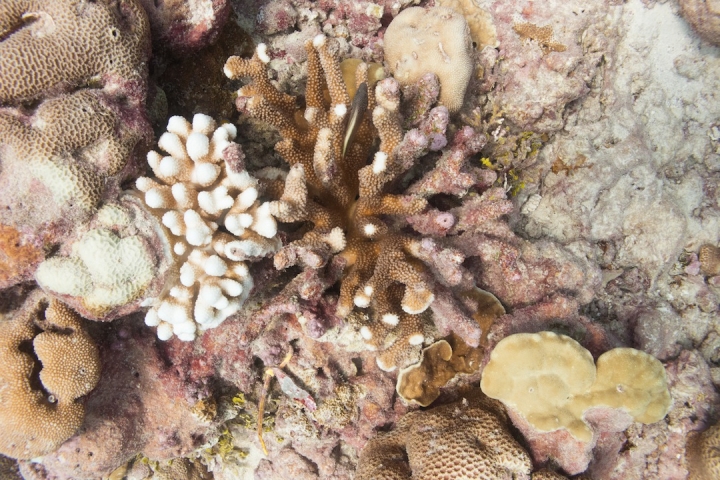 A slow and steady creep starting in 2014 turned into a rapid rise in the latter half of 2015. By November, water temperatures around the island reached as high as 88°F. That’s great for a swim but terrible for coral.

When waters warm for an extended period, they essentially cook the algae that help coral grow. If water temperatures remain that high, coral can’t recover and die off.

The world’s oceans are currently in the midst of the third major die off — termed bleaching by scientists — ever recorded and the hot waters around Christmas Island have been dealing with the heat for months.

“Christmas (Island) has been on highest bleaching alert for many months now, since at least July, and it will stay on the highest level through next March,” Julia Baum, a coral ecologist at the University of Victoria who is also doing work at Christmas Island, said. “That is almost unprecedented, if not totally unprecedented. We normally look at temperature anomalies in degree heat weeks. We’ve been saying we might have to change the scale to degree heat months because this is going on and on and on.”

Months upon months of exposure to extreme heat have cooked corals to a crisp. Cobb estimated that 30 percent of the corals she’s been monitoring are dead.

“Given that what we saw in November was a much larger level of destruction than anticipated, we’re truly braced for the worst,” she said, noting that some areas could see 100 percent die off by the time El Niño is expected to wind down in March.

A ‘Crystal Ball’ For the Rest of the World

But there’s hope that some coral could survive and both Cobb and Baum are looking out for them in hopes of unlocking what their secret to survival is. Christmas Island’s location makes it a model location to study the role of warming on reefs, but it also has a diverse array of reefs — from ones impacted by human fishing to ones that are in pristine condition — that make it ideal to see how different influences play out.

Monitoring reefs’ reaction to warm waters and how they recover (or don’t) when El Niño finally ebbs could also provide clues about how to manage reefs in other parts of the world.

Global warming has made oceans the warmest they’ve ever been and temperatures are expected to keep rising for decades to come. That could push some reefs out of their comfort zone and cause coral die offs. Add in the stress of ocean acidification and protecting coral reefs becomes even more important (and challenging).

Reefs provide protection against storm surge and when managed properly, can be an important source of subsistence for millions around the world. Researchers estimate that reefs could provide as much as $172 billion in services a year, from tourism to fishing to flood protection. In part, that’s why their survival is so important.

“It’s like holding a crystal ball. We can figure out the effect, we can figure out why, we can figure out which corals are super performers. If we understand that, we can make targeted conservation solutions, we can learn lessons and transfer them to other reefs,” Baum said. “Climate change is coming to all of those reefs. If we sit and do nothing right now, it will too late.”

You May Also Like:
America’s Global Plan for Warming Has Domestic Roots