As coral reefs the world over bleach from warming waters, dissolve from acidification and are attacked by diseases and pests, scientists are discovering the critical roles that they play in breaking destructive swells before they reach coastlines. 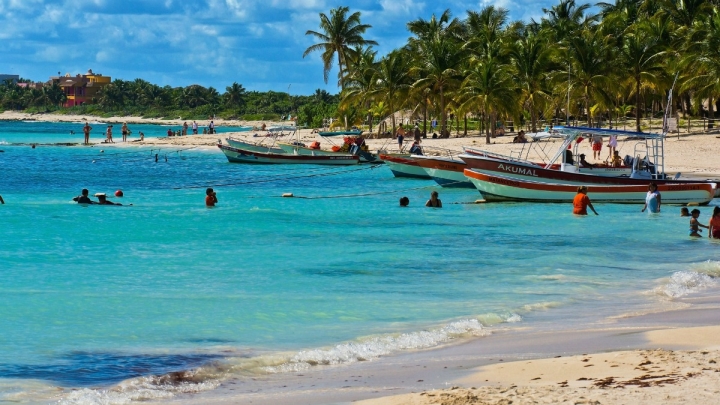 Coral reefs reduce the heights of waves by a little more than two-thirds on average worldwide before they crash over coastlines, research published this week showed.

Published in the journal PLOS One, the research illuminates a hidden cost of the ongoing losses of reefs that shelter shorelines throughout balmy coastal regions.

Salt marshes have similar effects as coral reefs, the analysis showed, though they tend to grow at sites where waves are smaller and less powerful. Mangroves and seagrass and kelp beds were found to reduce wave heights by about a third.

The research was based on analysis of a new database that was produced by the scientists, using data from 69 monitoring projects in coastal habitats, including mangroves, salt marshes, coral reefs and seagrass and kelp beds around the world. 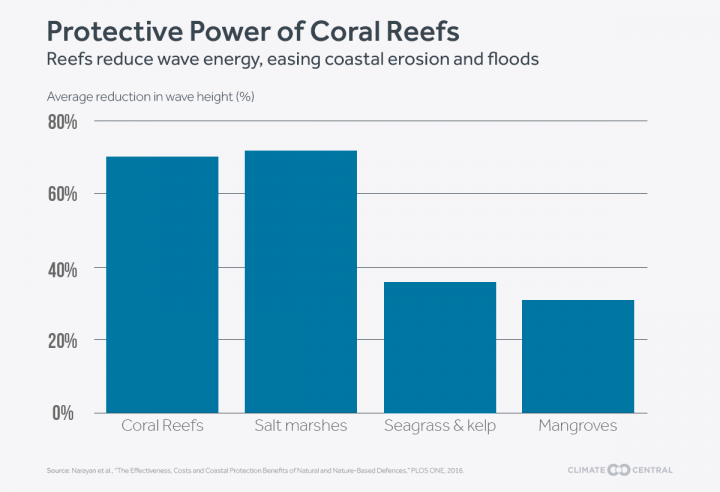 The database and the study were produced through the Science for Nature and People Partnership, an initiative coordinated by conservation groups and an ecological analysis center at the University of California, Santa Barbara. The database also includes data from 52 habitat restoration projects.

“The fact that they’ve done this for as many sites as they have is, in my book, impressive,” said Erika Lentz, a U.S. Geological Survey geologist who wasn’t involved with the research. “This stuff is really hard to quantify.”

In the Lower 48, Florida in particular is ringed by mangroves, marshes and other coastal ecosystems, and parts of it are protected by America’s largest barrier reef. More research is needed to determine how the region’s shores could be affected by deaths of the Florida reef tract’s corals, said Brian Haus, a professor in the University of Miami’s ocean sciences department.

“If you took away our fringing reefs in Florida and in the Keys there would definitely be a big impact,” said Haus, who wasn’t involved with the new study. “But we’re not like some of these really vulnerable Pacific Islands, where they get huge incoming wave energy.”

More data from individual ecosystems and restoration projects could help scientists and coastal planners figure out how to best to manage shoreline habitats and project impacts from their losses.

“We find that reefs are highly effective, but there are very few projects that provide information about their effectiveness,” said Siddharth Narayan, a University of California, Santa Barbara researcher who led the study. 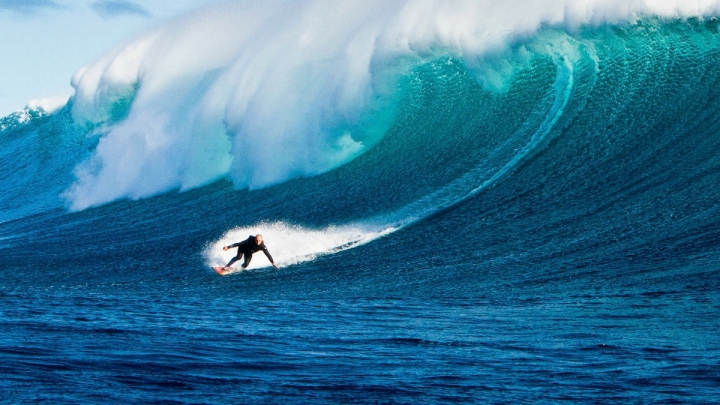 Coral reefs can cause swells to break before they reach shore, reducing their power by the time they reach land.
Credit: Storm Surfers 3D/Red Bull Content Pool

Reef management has recently become a global concern, with surveys showing 93 percent of the Great Barrier Reef bleached amid a pulse of record-breaking warm El Niño waters. The Coral Sea’s surface waters were heated by nearly 2°F in March by global warming.

Similar bleaching has been reported throughout the Caribbean and elsewhere in the tropics. About one-sixth of corals died worldwide following the first global bleaching epidemic in the late 1990s. Worldwide bleaching hit again in 2010.

As the Great Barrier Reef’s ailing corals struggle to draw food- and color-producing algae back into their tissues, there’s more hinging on their survival than the rich fisheries, tourism jobs and natural wonderment they provide.

The Australian state of Queensland would have a “different looking coastline” if the reef did not exist, said Rob Beaman, a marine geologist at Australia’s James Cook University.

If the Great Barrier Reef largely dies during the decades ahead, as many scientists fear, it would leave behind reefs of algae-covered coral skeletons that would continue to reduce waves. The skeletons would stop growing and begin breaking down, though, even as climate change makes seas rise and storms fiercer.

The new study also analyzed the cost-effectiveness of coastal restoration projects, showing it can be two to five times cheaper to restore a salt marsh or a mangrove than to build an underwater breakwater using rubble or concrete.

Coral reefs were found to be more expensive to restore than other coastal ecosystems, showing the economic value of protecting them in the first place.

Reefs are being restored by rearing corals in nursery-like settings and planting them in the wild, and by placing hole-filled concrete among them to provide habitat for fish. 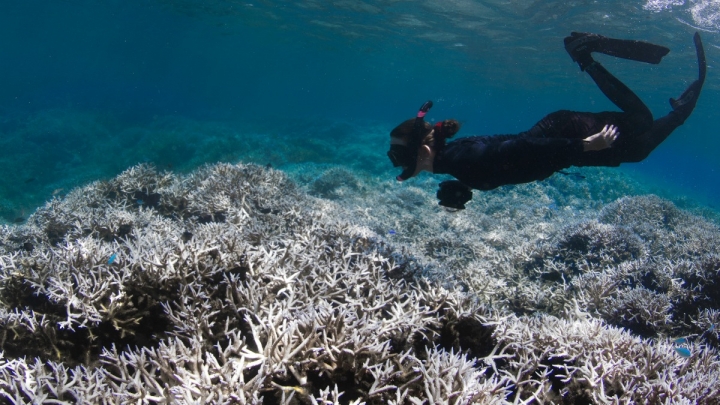 Reducing impacts from fishing, pollution and other biological stresses can help corals recover from bleaching and storms. So, too, would slowing global warming, which countries are aiming to do through a United Nations treaty that encourages voluntary pollution reductions.

Beck is working on a project in Mexico’s Riviera Maya to restore parts of the Mesoamerican Reef, which stretches from the Yucatan Peninsula to Honduras.

Despite the many maladies afflicting reefs, Beck says they’re in “better shape” than other coastal ecosystems, such as mangroves, hundreds of thousands of acres of which continue to be bulldozed or chopped down worldwide every decade.

“What we’ve seen from recent work on coral reefs is that if you manage other stressors well, we can get reefs to recover,” Beck said. “We found if you reduced fishing and you reduced pollution, that the reefs bounce back. They’re adapting, as well. They’re fast-adapting organisms.”

Even as some of the world’s greatest biological treasures seem poised to collapse under pressures from climate change and other threats, Beck remains optimistic that the critical roles they play will prompt communities and industries to invest in their survival.

“They provide such a hugely important role in protecting people and property, we can find ways to finance their management and restoration,” Beck said.

You May Also Like:
Global Warming Is Starving West Coast Waters of Oxygen
Paris Pact Could Benefit From Halt of Fossil Fuel Leases
Here’s the Climate Context For the Fort McMurray Wildfire