Compared to 2 Previous Years, 2013 Was a Paper Tiger

The U.S. suffered its share of extreme weather and climate events in 2013, from a monster tornado that flattened large parts of Moore, Okla., to the driest year on record in California. But compared to the blockbuster calamities of the previous 2 years, 2013 stands out more for its relative tameness.

Mother Nature’s most powerful storms — hurricanes — were unusually absent from the North Atlantic. Not a single hurricane made landfall in the U.S., and no major hurricanes of Category 3 or above intensity even formed. In addition, the longstanding drought that had gripped much of the nation abated. And for the first time in 20 years, daily record low temperatures outnumbered daily record highs. 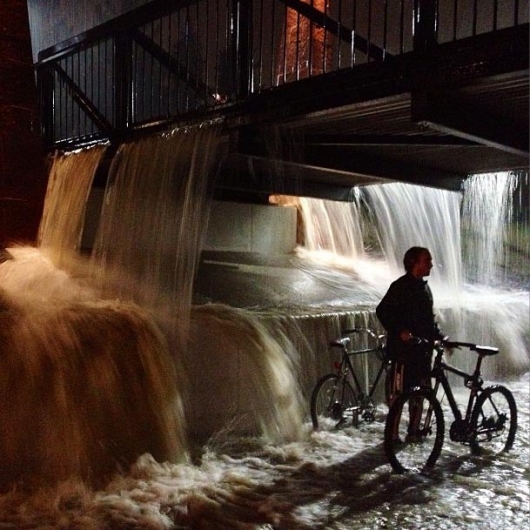 A bicyclist takes refuge under a bridge spilling water from the rains in the early hours of the flooding in Boulder, Colo., on Sept. 11, 2013.
Credit: By Brandon Randash via Instagram.

While 2011 featured a torrent of tornadoes that killed 551 and 2012 saw the warmest U.S. year on record, a drought that stretched from coast to coast as well as the devastation from Hurricane Sandy, 2013 proved that even though the globe continues to warm, every year is not going to be record breaking when it comes to extreme weather.

Of course, it’s all relative. All weather now occurs in a juiced atmosphere — like a baseball player on steroids — by higher temperatures and additional moisture, which can produce more severe extreme weather events. The number of extreme events this year may not have matched the past few years, but they certainly left their mark. Just ask residents of Boulder, Colo., who experienced some of the worst flooding in their community’s history, or Wichita Falls, Texas, which missed out on the drought relief and is facing a water supply emergency.

Even if the pace of extreme events slowed in the U.S., the data this year showed that the march of global warming goes on. The world has not seen a cooler-than-average month since 1985. Globally, the 2000s were warmer than the 1990s, which were in turn warmer than the 1980s. And there is more CO2 in the air now than at any time mankind’s history.

In other words, the odds are increasingly stacked in favor of more extreme events, whether they come at a relentless pace, or at a slow, steady pace.

“I think relative to 2011 and 2012, (2013 was) perhaps more quiet, but is this a statement in itself about our calibration to the new normal,” Marshall Shepherd, director of the atmospheric sciences program at the University of Georgia, said in an email conversation. “I am not sure, but after a child runs a fever of 105, does a fever of 103 cause a sigh of relief? I can't help but think along these lines when I hear the comparisons to 2011 (and) 2012.”

One way of measuring extremes is by examining the Climate Extremes Index, which is run by the National Climatic Data Center in Asheville, N.C. The index captures the geographical extent of extreme temperature and precipitation across the continental U.S. According to the index, 2011 and 2012 were both unusually active years, and last year had the highest value on record since 1910. In contrast, 2013 ranks close to the expected long-term value.

“This index helps to put things into a historical perspective by indicating that the current year has been less extreme (in the U. S.) than most recent years — especially since 1998 — but perhaps the spate of extreme weather events in the past decade or two has distorted our perception to the point that a very average year like 2013 now seems unusually quiet,” Stephen Vavrus, an atmospheric sciences research at the University of Wisconsin-Madison, said in an email.

Many of the extreme events that did take place may have been made more likely or more severe due to climate change, particularly in the case of temperature and precipitation extremes. Those events played out on the world stage, with a deluge and ensuing flooding in Calgary in September, the epic heat and wildfires that turned the skies above Sydney crimson in October, and deadly Super Typhoon Haiyan in Southeast Asia in November.

So much rain fell in one week, starting on Sept. 9, 2013, that Boulder, Colo., went from having one of its driest years on record to its wettest.
Click image to enlarge. Credit: Dennis Adams-Smith/Climate Central

In addition, the world crossed a dubious climate threshold in May, when the amount of planet-warming carbon dioxide in the atmosphere rose above 400 parts per million for the first time in our history. Climate data gleaned from ice cores, ocean sediments, and other sources show that it’s the highest CO2 concentration in the air since possibly as far back as 15 million years ago.

Numerous climate studies, including the most recent report from the U.N. Intergovernmental Panel on Climate Change, have found that by warming air and ocean temperatures, climate change is adding more moisture to the atmosphere. That moisture can be wrung out by storm systems to create heavier rain and snowstorms, and some studies have found that climate change made specific extreme precipitation events, such as a flood in the United Kingdom in 2003, more likely to occur.

A similar extreme flooding event paralyzed parts of the Colorado Foothills in September. While research is underway to determine whether climate change played a role, Colorado was deluged with unprecedented rainfall. Entire communities were cut off for days due to washed out roads and mudslides, and dozens had to be rescued by helicopter.

Victor Murphy, a meteorologist with the National Weather Service, said the flooding was “perhaps the most significant weather/climate event to impact the continental U.S. this year.”

In Boulder, records for 1-day, 2-day and 7-day rainfall totals were set. Boulder saw more rain in one week in September (16.9 inches) than it had recorded in any month since records began there. Many other locations also had more than 10 inches of rain during the week from September 9-15.

While some analyses indicated the rainfall in Boulder had a frequency of about 1-in-1,000 years, experts have cautioned that such estimates have large uncertainties because of the relatively short period of instrument records. Still, it is clear that the heavy rainfall and resulting flooding was extremely rare, if not unprecedented, in the modern history of that part of Colorado. 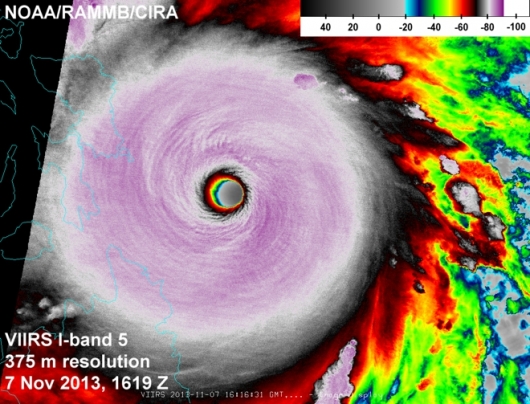 According to the insurance company AON Benfield, the flooding killed 10 people, damaged more than 25,000 homes and businesses, and caused more than $2 billion in losses.

Of course, when it rains it doesn’t always pour. In 2013, while the overall drought footprint shrunk dramatically, California ended the year facing a potentially dire scenario after having its driest calendar year on record. According to Murphy, through the end of November, California’s statewide precipitation average was just 7 inches, compared to the 1901-2000 average of close to 19 inches for the same period.

Extended drought can help fuel wildfires and California already saw its third-largest wildfire in 2013, when the Rim Fire charred 257,314 acres near Yosemite National Park. Another major wildfire caused the biggest single loss of firefighters since the September 11 attacks when 19 elite firefighters were overtaken by flames while battling a blaze near Yarnell, Ariz.

And if California goes through the rest of this winter without a significant amount of rain and mountain snow, there could be major water supply woes in 2014.

But that’s a story for another year-end review.