Beaches are facing off against a changing climate, and they’re losing ground. Literally.

Waves, currents, storms and people all move the sand that make beaches, well, beaches. But a combination of rising sea levels, stronger coastal storms and coastal development means that sandy shorelines are increasingly disappearing, leaving the millions who live there facing major challenges in a warming world. 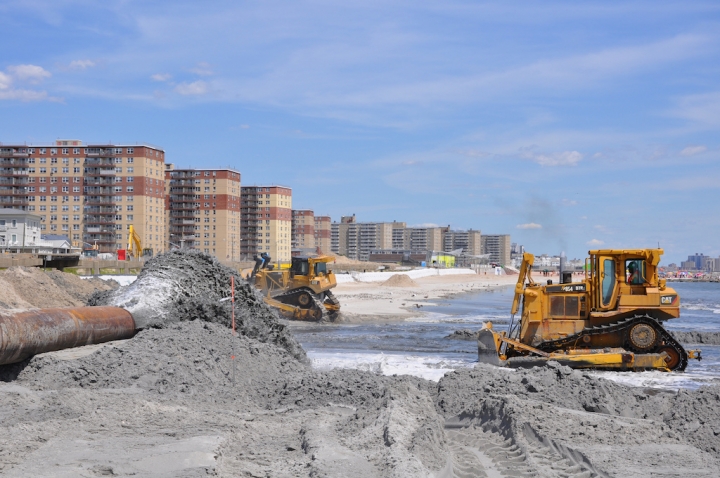 A sand and water slurry mixture is pumped onto Rockaway Beach in Queens, N.Y., on Aug. 15, 2013 as part of beach renourishment efforts there.
Credit: U.S. Army Corps of Engineers/flickr

“Sea level rise of one foot or a foot and a half per century is basically inundating and drowning the shoreline,” Norbert Psuty, professor of coastal geomorphology at Rutgers University, said.

A common solution to beach erosion is beach nourishment, a process that pumps sand from dredging ships offshore to replace the lost sand on the beach. But this process is time consuming and costly and often needs to be repeated every few years to maintain the beach.

“As a short term solution, it’s OK if you’re doing this to allow for changes to be made to reduce the infrastructure and to allow the system to return to quasi-natural state,” Psuty said.

Yet, the motive behind beach nourishment often has more to do with protecting shoreline property and the tourism industry from rising seas than allowing beaches to return to their natural state.

“Development is absolutely responsible for the majority of the beach nourishment,” Andrew Coburn, assistant director of The Program for the Study of Developed Shorelines at Western Carolina University, said. “Well over 99 percent of the shorelines that are nourished are developed so there is some economic value placed behind them.”

Sea level has risen about eight inches since 1900 as climate change has melted land ice and warmed the ocean, but the rate is projected to increase as temperatures rise. According to  the Intergovernmental Panel on Climate Change, oceans could reach 3-5 feet higher by century’s end and as much as 20 feet higher in the more distant future.

As the waters rise higher, beach nourishment projects are likely going to become more frequent. Nearly 40 percent of the U.S. population lives near the coast. The encroaching ocean could displace millions of people, which may explain why federal and state governments spend millions of dollars each year to restore beaches.

But the price tag for the never-ending battle may soon be too much. The price to nourish a beach can be as much as several million dollars; one project to restore Miami Beach cost the county more than $18 million in 2001.

“The cost per cubic yard of sand has steadily gone up, and the price of nourishment has gone up significantly,” Coburn said. “At some point, a lot of places are not going to be able to afford it.” 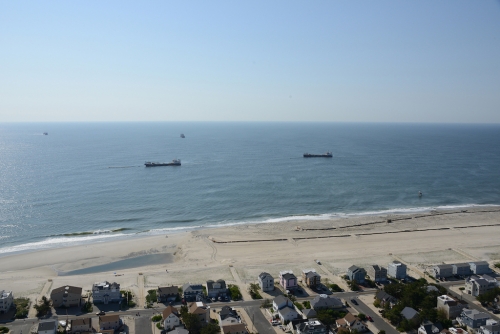 Regions with heavy shoreline development and moderate erosion rates, like the Florida coast or the Jersey Shore, are facing some of the greatest challenges from erosion, Coburn said.

Florida has the highest number of restoration projects, with more than 460 episodes of beach nourishment. New Jersey has completed a total of 322 projects including 20 emergency nourishment projects on its beaches in the wake of Sandy in 2012.

Other solutions to beach erosion have fallen out of favor. Seawalls and jetties can help, but may eventually cause problems elsewhere on the beach. Offshore breakwaters, or large piles of rocks parallel to the shore that cause waves to break farther out, reduce wave action on the beach, but only in certain areas.

“The very best option to maintain beaches would be to allow them to shift, to respond to the driving forces,” Psuty said. “They’ll only be retained if they’re allowed to migrate. That’s easier said than done, obviously.”

These approaches to erosion, including beach nourishment, are often seen as only band-aid solutions that many beach communities use to postpone the alternative: moving, and surrendering homes, businesses and vacation spots to the shifting sands.

“In the future, in a lot of places, moving is going to be the only solution,” Coburn said.

You May Also Like:
Warmer Seas Linked To East Coast Hurricane Outbreaks