Coal Slides to New Low As Source of Electricity

The amount of electricity generated using coal in the U.S. slid to its lowest level since at least 1970 in November, according to data released this week by the Energy Information Administration.

Coal-fired power plants generated 29 percent of the U.S. electric power supply in November, dropping from nearly 35 percent in July and 39 percent for all of 2014. The trend continues coal’s long slide away from national dominance as the primary source of electricity in the United States, EIA analyst Glenn McGrath said Wednesday.

“Coal generation is about as low as it’s ever been,” he said. “It’s never been that low for a particular month.”

Although the EIA does not have data prior to the 1940s, McGrath said it is unlikely that coal has ever had a lower share of U.S. electric power generation.

Coal’s dominance has been slipping since 2007 when it slowly began losing ground to natural gas thanks in part to the fracking boom in the U.S. Overall coal consumption dropped 24 percent between November 2014 and November 2015, while natural gas use spiked 21 percent during the same period, according to EIA data.

April 2015 marked a turning point for coal. Carbon dioxide emissions from coal-fired power plants reached their lowest levels since 1988, and for the first time in history, power plants running on natural gas produced more electricity than those running on coal. That happened again in July, and since then, natural gas has been America’s largest source of electricity.

Although new regulations and federal climate policies — including the Clean Power Plan — have helped to push utilities toward natural gas, the main reason behind the shift may be economics.

“The Clean Power Plan hasn’t even hit them yet,” McGrath said. “Gas is just dirt cheap, it’s that simple. It’s probably unprecedented to see, on a Btu (British thermal unit) basis, to see gas undercut coal. Gas has been taking coal’s share away for a while.”

Whereas coal averaged $2.23 per million Btu in 2015, natural gas costs less, but that hasn’t always been the case. 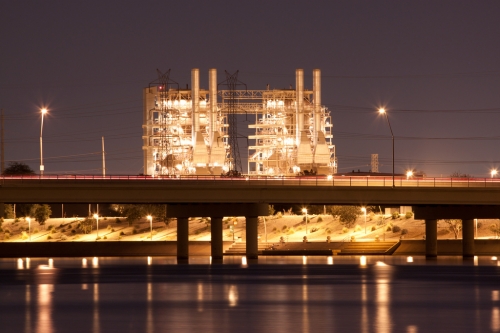 “Wherever you have the option to pick coal over gas, you’re going to go with gas,” McGrath said. “A whole lot of production capacity has been put online with all this fracking. They’ve generated tremendous supply.”

Climate change may be another factor in the recent rise of natural gas and the fall of coal; 2015 was the warmest year in recorded human history, and the fall and winter have so far been the warmest ever recorded.

“The warm winter has kept demand low” for natural gas, McGrath said. “There’s no place to put all the gas.”

Steve Clemmer, director of energy research for the Union of Concerned Scientists, said that the trend away from coal is likely to be accelerated by the Clean Power Plan, and it is likely to continue as long as natural gas prices stay low.

Prices are likely to rise a bit in the next two years, and that could shift the balance toward coal again, he said.

“If gas prices go up and it gets colder, I’d expect the share of coal to go up again,” he said.

You May Also Like:
Wildfires Are Burning Some of the World’s Oldest Trees
Climate Matters: Cold Nights on the Decline
Solar Job Boom Continues As Prices Spur Demand
El Niño Heat Peaks, But Impacts Still to Come