Natural gas and solar are the winners so far in 2014 in the race to move electric power generation away from coal, a new U.S. Energy Information Administration report shows. 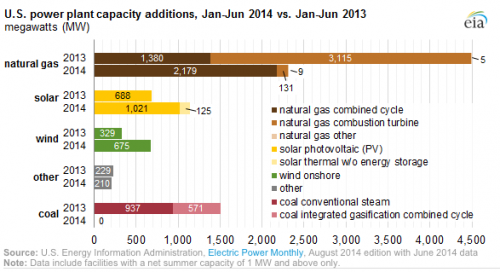 The last year in which there were no additions to coal power generating capacity in the U.S. was 1998, according to EIA data.

New natural gas-fueled power generators are quickly coming online across the country as the U.S. continues its move away from coal.

The U.S. added nearly 2,200 megawatts of natural gas power generating capacity in the first six months of 2014, up 60 percent over the same period in 2013, according to the EIA report.

Solar is growing fast, too, as more than 1,100 megawatts of new solar power generating capacity came online in the first six months of 2014, up 70 percent over the same period last year.