May CO2 Peak Shows Trend Is Up, Up, Up

Any day now, carbon dioxide levels in the atmosphere will reach their annual peak in a cycle driven by the collective inhale and exhale of the world’s plant life. But because of the extra CO2 pumped into the air by human activities, this year’s peak will be higher than last year’s, which was higher than the year before that — a sign of the unabated emissions that are driving the Earth’s temperature ever upward.

The amount of heat-trapping carbon dioxide in the atmosphere has been measured at the observatory atop Hawaii’s Mauna Loa volcano since 1958, producing a record that shows not only the yearly maximum and minimum driven by the spring bloom and fall dieback of plants, but also the steady climb in CO2 levels every year.

The last few years have seen a spate of atmospheric CO2 milestones in the Mauna Loa record: The first measurement of CO2 above 400 parts per million (ppm) in May 2013, the first month entirely above 400 ppm in April of last year, and this year will likely see several months with an average above that level.

While 400 ppm is something of a symbolic threshold, as the amount of extra heat trapped by it versus 399 ppm is minimal, it serves to show how far carbon dioxide in the atmosphere has risen from preindustrial levels of 280 ppm. Studies have estimated that CO2 levels on Earth haven’t been this high in at least 800,000 years.

“The increase basically comes from the increase of coal and oil consumption,” Stephen Walker, a scientist with the Scripps Institution of Oceanography, which keeps the Mauna Loa record, said.

That increase in CO2 has led to a rise in the Earth’s average temperature of 1.6°F since the beginning of the 20th century. Depending on if and when emissions are curbed, another 3°F to 9°F of warming could be in store by the end of this century.

The reason that CO2 is building up to higher levels each year is related to the seasonal cycle. While plants take up CO2 as they awaken after their winter hibernation, and then release it again as they go dormant again in the fall, they can only sop up so much in a given season, leaving behind an ever-growing excess amount. 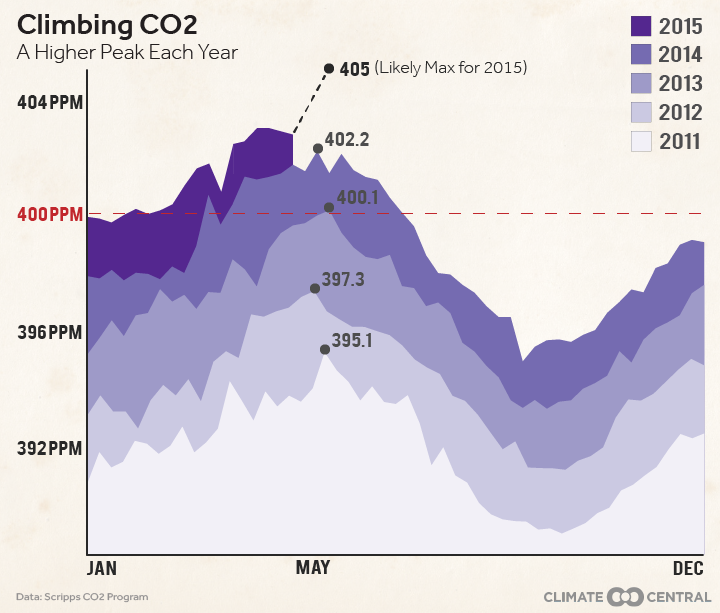 Right now, that excess is to the tune of about an extra 2 ppm accumulating in the atmosphere every year. That means that the CO2 peak that comes each May is around 2 ppm higher than it was the year before, as shown in the graph above. This year, that peak is expected to be around 405 ppm.

But not only is the amount of CO2 in the atmosphere going up every year, the amount by which it is doing so is accelerating; back in the 1950s, the yearly increase was only about 0.75 ppm per year. The yearly increase is concerning on its own, but the acceleration of that increase “is kind of even more scary,” Walker said.

“And we’ve failed pretty miserably at that” effort, he added.

The failure to reduce emissions also led to another recent milestone: The first month with a global average above 400 ppm came in April this year. (The global average is delayed from the Mauna Loa record because most CO2 emissions come from the Northern Hemisphere, and it takes about a year for air from that hemisphere to mix into the Southern Hemisphere.)

With CO2 continuing to climb, it could be just a year or two until levels at Mauna Loa remain above 400 ppm year-round, and global levels won’t be far behind.