CO2 on Path to Cross 400 ppm Threshold for a Month

Last year, atmospheric carbon dioxide briefly crossed 400 parts per million for the first time in human history. However, it didn’t cross that threshold until mid-May. This year’s first 400 ppm reading came a full two months earlier this past week and the seeming inexorable upward march is likely to race past another milestone next month.

“We’re already seeing values over 400. Probably we’ll see values dwelling over 400 in April and May. It’s just a matter of time before it stays over 400 forever,” said Ralph Keeling in a blog post.

Keeling runs a carbon dioxide monitoring program for Scripps Institute of Oceanography, a position he took over from his father who started it. The program takes daily measurements from the Mauna Loa Observatory in Hawaii, which sits at 11,141 feet on a volcano’s northern flank. Measurements have been recorded there continuously since March 1958. They’ve risen steadily since the first measurement of 313 ppm as humans have continued to burn more fossil fuels. 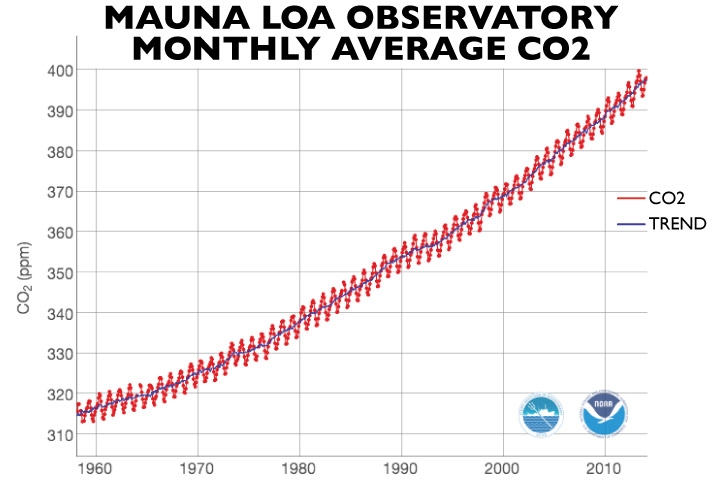 The graph of those concentrations is known as the Keeling Curve, one of the most iconic images in science. In addition to showing a steady rise in carbon dioxide, the graph also shows the seasonal variations in the curve. In Northern Hemisphere spring, plants burst to life and suck carbon dioxide out of the air until they die off in the fall.

While 400 ppm is mostly a symbolic number, the climate changes it could cause are not. Among other impacts, increased carbon dioxide contributes to heating the planet’s surface and ocean temperatures, which in turn melts ice and raises ocean levels.

Oceans have already risen 8 inches in the past century and may rise another 3 feet by the end of the century with grave costs to coastal communities. When carbon dioxide was last at these levels, polar ice melted and flooded the oceans, raising levels up to 130 feet higher than today's levels.

Temperatures were also up to 11°F above today’s temperatures. In the next century, temperatures are projected to increase by up to 8.6°F if emissions aren’t reduced.

The big difference between the current carbon dioxide levels and the last time they were this high is how fast they’ve increased in recent times. That rate shows little sign of slowing.