When it comes to carbon dioxide, what goes up doesn’t come down. It stays in the atmosphere for thousands of years after plumes of pollution have been released from tailpipes and power plants, trapping heat and warming the planet.

That’s why some scientists are increasingly looking at global warming as a waste disposal problem. They say that thinking of emissions in terms of trash that needs to be taken out may draw more attention to something called negative carbon emissions — the process of physically removing carbon dioxide from the air to reduce its concentration in the atmosphere. 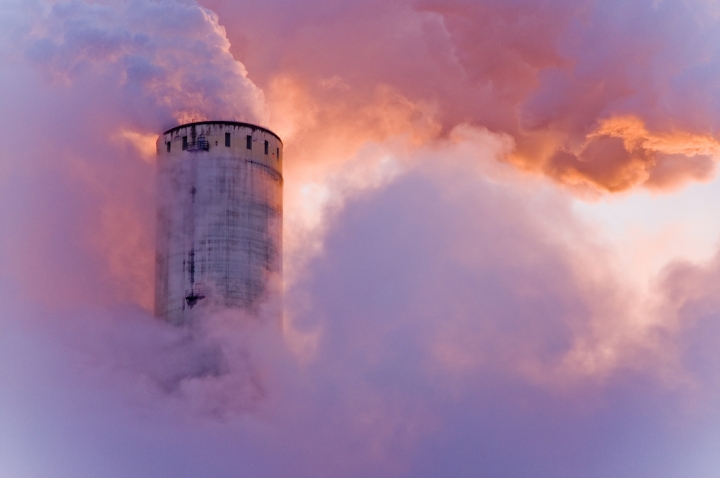 “It has been estimated that the warming due to one unit of CO2 emissions is roughly constant for about 1,000 years, and then it gradually drops. So if you want to improve on that, you have to remove CO2 yourself,” said Klaus Lackner, director of the Center for Negative Carbon Emissions at Arizona State University.

Research shows that keeping global warming from exceeding 2°C (3.6°F) under the Paris Climate Agreement may not be possible without some form of negative carbon emissions. Atmospheric carbon dioxide concentrations, which breached 400 ppm atop Hawaii’s Mauna Loa for the first time in 2013, are expected to continue climbing unless humans take significant steps toward burning fewer fossil fuels. The remote reaches of Antarctica crossed the 400 ppm threshold in May for the first time in 4 million years.

CO2 concentrations are rising about 2.2 ppm annually, and the earth is expected to warm to 2°C when concentrations reach about 450 ppm. If today’s carbon dioxide emissions hold steady without reductions, it will take about 22 years to reach 450 ppm, and it’s possible the earth will overshoot that 2°C target if emissions continue increasing, Lackner said.

“Without negative emissions, a 2°C target is very difficult; a 1.5°C target is virtually impossible,” he said.

Lackner and other researchers say it’s time to find ways to remove the waste that’s collecting in the atmosphere after it’s expelled from all of humanity’s tailpipes and smokestacks.

“We are currently dumping our rubbish straight into the atmosphere without having to pay for it although we know it is harmful,” said Joeri Rogelj, an energy research scholar at the International Institute for Applied Systems Analysis in Austria. “Carbon dioxide removal is thus a way to clean up the mess we made.”

The Intergovernmental Panel on Climate Change acknowledged in its Fifth Assessment Report that negative emissions may have to be part of the strategy to stabilize the climate, but most climate policies aim to tackle climate change by cutting carbon emissions, not removing them from the atmosphere.

Only a handful of institutions — among them are the U.S. Dept. of Energy, Arizona State University, the University of Michigan and the Center for Carbon Removal in Berkeley, Calif.  — are studying ways to remove carbon from the atmosphere, and funding for the research is sparse.

Support exists for research on some technologies that may prove to be carbon neutral, but less money is available for others, such as direct capture of carbon dioxide from the air, that will prove to be carbon negative, Mark Barteau, director of the Energy Institute at the University of Michigan, said.

Lackner said it’s important to convey the urgency of negative emissions in order to gain support for further research. That’s where the waste disposal argument comes in.

“If you dig up a ton of CO2, you have to remove a ton of CO2,” he said. “If I were to dump garbage in front of my house, my neighbors would be upset with me, and I would not make things less tense if I promised to research the problem and figure out how to reduce my garbage production by embracing more modern methods and much higher efficiency. In the end, I have to get rid of the garbage.”

Carbon dioxide emissions remain in the atmosphere for thousands of years.
Credit: frankieleon/flickr

David Archer, a geosciences professor studying the global carbon cycle at the University of Chicago, takes the garbage metaphor farther to convey the urgency of negative emissions.

“Imagine not taking out the garbage for a whole year,” he said. “Your living space might be, what, knee-deep in garbage? Waist deep? If you also couldn’t take out the fossil fuel CO2 garbage, it would fill your house to the roof several times in that year, and you’d die.”

Sabine Fuss, a sustainable energy researcher at the Mercator Research Institute on Global Commons and Climate Change in Berlin, said another way to think about the need to reduce carbon dioxide concentrations in the atmosphere is in terms of an overflowing bathtub: The tub is filling up with water, and it’ll eventually overflow if some water isn’t removed.

“One is the lack of awareness (about) how late we are with mitigation — i.e., how full the bathtub already is,” Fuss said. “The other relates to the lack of public acceptance of the technologies — i.e., the way you take water out of the bathtub.”

Chris Field, director of the Carnegie Institution’s Department of Global Ecology, is more circumspect about the imperative for negative emissions and thinking of global warming as a waste disposal problem.

“It is possible we will decide that atmospheric CO2 is too high and needs to be reduced,” Field said. “That is the basis of Lackner’s garbage disposal analogy. I completely agree with Klaus (Lackner) that we are seeing real damages from climate change, and we will see more in the future. But we might deal with this in a variety of ways.”

Ambitious emissions reductions and investments that will allow countries to adapt to climate change are among them, Field said.

“Using negative emissions technologies to remove CO2 from the atmosphere is a definite possibility, but I don’t think it is one we should be counting on,” he said. “Personally, I am concerned that conversations about negative emissions are often used to justify a go-slow approach to emissions reductions.”

“We can’t stop (emissions) in time to avoid harmful climate change, and we need to start working backward as soon as we can,” Lackner said. “Of course, we need to do all the other things as well to stop emissions. Negative emissions combined with positive emissions will not get us there.”

You May Also Like:
This Is What the Ice-Free Northwest Passage Looks Like
In Streak of Extreme Storms, What’s the Role of Warming?