A new carbon dioxide milestone has been reached according to the World Meteorological Agency. Average carbon dioxide measurements at all monitoring stations in the northern hemisphere were above 400 parts per million for the month of April, the first time that’s been recorded in human history. 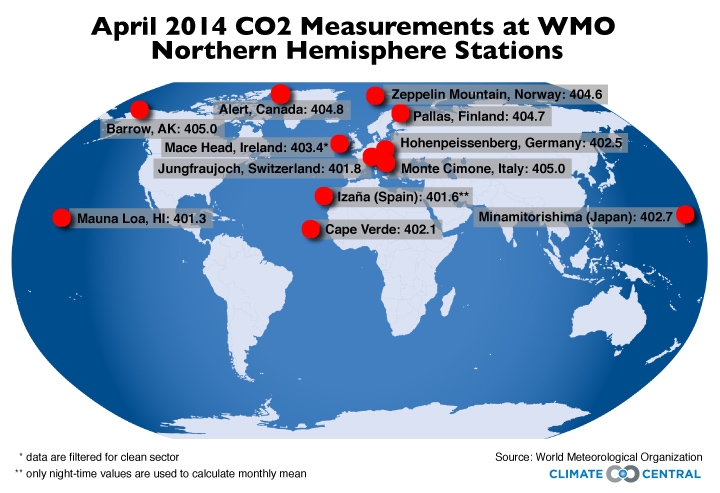 Previous reports from the Mauna Loa Observatory, the longest continually running CO2 monitoring site in the world, showed that the average CO2 concentration for April was above 400 ppm. On Monday, the WMO reported that the 11 other northern hemisphere monitoring stations that continuously monitor CO2 also surpassed the 400 ppm mark for the month.

“This should serve as yet another wake-up call about the constantly rising levels of greenhouse gases, which are driving climate change. If we are to preserve our planet for future generations, we need urgent action to curb new emissions of these heat trapping gases,” WMO Secretary-General Michel Jarraud said in a press release.

Atmospheric CO2 levels follow a seasonal pattern in the northern hemisphere, rising throughout the winter and peaking in late spring when blooming plants start to suck CO2 out of the air. Monitoring stations closer to the equator, where there’s less seasonality, and in the southern hemisphere, where there’s less land, don’t show the same dramatic fluctuations throughout the year.

Southern hemisphere CO2 measurements also lag a bit behind their northern counterparts because there are more sources of human CO2 emissions in the northern half of the globe. Though CO2 mixes in the atmosphere, it takes time to disperse, which accounts for a large chunk of the hemispheric split. 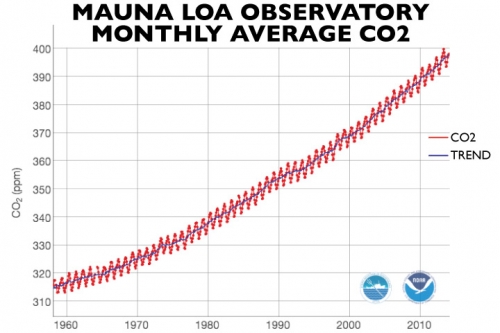 All monitoring stations show a long-term upward trend, though. CO2 has risen from 278 ppm at the start of the Industrial Revolution to current levels, largely due to emissions from human activities. The last time there was this much CO2 in the atmosphere was anywhere from 800,000 to 15 million years ago. One thing that is certain: humans have never lived in a world where CO2 has been this high.

CO2 is the main greenhouse gas driving climate change. Since the Industrial Revolution, the global average temperature has risen by 1.4°F with larger increases ranging from 3°F to more than 9°F likely into the 21st century, depending on whether greenhouse gas emissions are curbed.

At the current rate of increase, the WMO estimates that the annual average concentration of CO2 in the atmosphere could eclipse 400 ppm as early as next year.