LONDON – Extra cloud cover caused by emissions of industrial pollutants is known to reduce the effects of global warming, but its impact in reducing temperatures has been over-estimated in the climate models, new research has found.

This is particularly significant for China and India, because it has been believed that these two giant countries would be partly shielded from the effects of climate change by their appalling industrial pollution. The Max Planck Institute for Chemistry in Germany believes this potential cooling effect has been exaggerated.

The Institute’s study looked at the behavior of sulphate particles in the air created by the reaction of oxygen with sulphur dioxide released from factory chimneys and other sources of pollution. 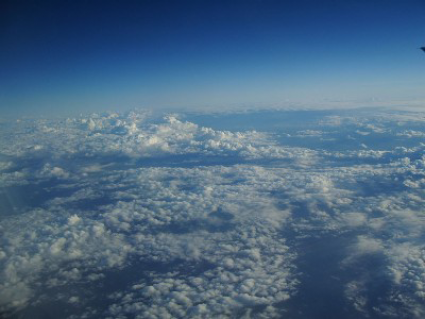 Extra cloud cover caused by emissions of industrial pollutants is known to reduce the effects of global warming, but its impact in reducing temperatures has been overestimated in the climate models.
Credit: Ave Maria Moistlik

In humid conditions the sulphates attract water droplets and form clouds. This increase in the cloud cover reflects more sunlight back into space and so cools the earth.

The Max Planck researchers went to study a cloud formed at the top of a mountain, taking samples at various times to see how the sulphates reacted progressively.  What was crucial was how the sulphates were formed in the first place.

Current climate models assume that hydrogen peroxide and ozone have a large role in creating the sulphates, but the new research shows that the catalysts for the chemical reaction are more likely to be metal ions like iron, manganese, titanium or chromium.

The key factor is that all of these are heavier than hydrogen peroxide and ozone, and because of this are more likely to fall out of the cloud through the pull of gravity, thus considerably reducing the cooling effect of the original pollution.

Eliza Harris and Bärbel Sinha, with a number of other scientists, captured the air samples and examined the isotopes in a mass spectrometer.

Harris, who was recently awarded the Dieter Rampacher Prize as the youngest doctoral candidate of the Max Planck Society, said: “The relative reaction rates of isotopes are like fingerprints, which tell us how the sulphate was formed from the sulphur dioxide.”

“As my colleagues and I compared the basic assumptions of climate models with my results we were very surprised, because only one of twelve models considers the role of transition metal ions in the formation of sulphate,” said Harris, who is now working at the Massachusetts Institute of Technology (MIT) in the U.S.

Because of the extra size of the sulphates and hence their greater weight, compared with the previous assumptions, she believes that climate models have over-estimated the cooling effect of the sulphate aerosols by assuming they would stay airborne longer.

So far the findings have not been factored into calculations on the regional effect of climate change. Harris says that in Europe, where pollution from industrial processes is already on the decline, the change in the calculations on warming would be relatively small.

However, in the growing industrial giants like India and China, where coal-fired power stations and other forms of industrial pollution are throwing out sulphur dioxide at an ever-greater rate, then the effect could be considerable. Further research on this is continuing.