Time is running out, El Niño.

If the climate phenomenon that forecasters have been watching for the better part of a year — and that can alter weather patterns around the globe — doesn’t get going soon, then it probably won’t happen. 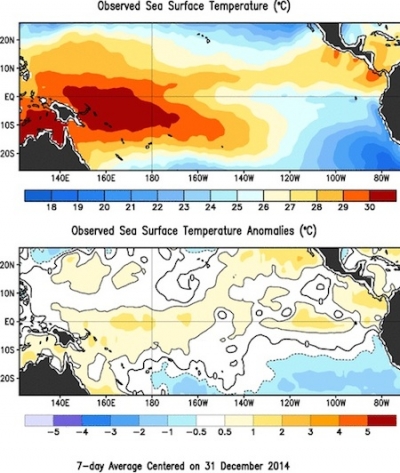 With the latest forecast update released Thursday, it’s still slightly more likely there will be an El Niño than not.

Forecasters have had an El Niño Watch in place since last March, and in the spring, at least, the odds that one would happen were high. A large surge of warm ocean waters — a hallmark of an El Niño — worked its way across the Pacific Ocean. But then, nothing. Month after month, season after season, El Niño has refused to be pinned down, flirting with becoming a full-blown event, only to back away again.

Now, forecasters with Climate Prediction Center and the International Research Institute for Climate and Society at Columbia University have lowered their expectations slightly from the 65 percent chance in December, now giving the El Niño a 50 to 60 percent chance of forming over the next two months.

“We’re taking a step back, but we’re not ready to throw in the towel,” CPC forecaster Michelle L’Heureux said.

The latest retreat comes from two sources. One is the same thing that has been holding the El Niño back for months: The lack of any sign that the atmosphere is seeing the warm ocean waters and responding the way it is expected to.

During a classic El Niño, warm waters shift to the eastern tropical Pacific, and in turn cause a change in where rains and convection occur in the tropics. That shift then has ripple effects on the weather in the U.S., most notably in the winter months, including typically wetter and cooler conditions across the southern portions of the country. Because the CPC is a U.S. government forecasting agency, that atmospheric response is a key factor they look for to officially declare that an El Niño is in place.

El Niños also tend to raise global temperatures, and one forming could help keep the global record heat of 2014 going into 2015.

Right now, though, the atmospheric patterns are all wrong. Rainfall and convection is still concentrated too far to the west of the International Dateline.

“That is not the pattern you want to be seeing,” L’Heureux said.

There’s still a chance the atmosphere could get the memo, though, syncing up with the ocean.

“Coupling can happen very easily if the circumstances are right,” L’Heureux said. The problem for forecasters, though, is that those atmospheric signatures are only predictable two to three weeks in advance.

Some scientists have argued that the strong warming of the ocean surface seen in the fall meant that an El Niño was in place, even if it didn’t meet the CPC’s technical definition. And some of the effects typically seen with an El Niño did seem to show up during the year, in particular a lackluster Atlantic hurricane season.

But the problem for the El Niño now is that those warm sea surface temperatures have cooled a bit over the past month.

The seesawing of this El Niño event has been a frustrating roller coaster for forecasters, but it could also be an important learning experience. The computer models forecasters use seem to have a harder time accurately capturing borderline El Niño like this one, whereas they had no problem anticipating the blockbuster event of 1997-1998. Delving deeper into this “El Limbo,” as some have called it, could help forecasters learn what the models are getting wrong and tweak them before future episodes.

For now, though, forecasters wait to see what turn El Niño will take next.