Can Climate Scientists Make A Difference by Not Flying?

In other words, climate scientists curtailing their air travel would make a microscopic dent in reducing emissions, but a new paper argues they should do it anyway, because their influence goes far beyond numbers. 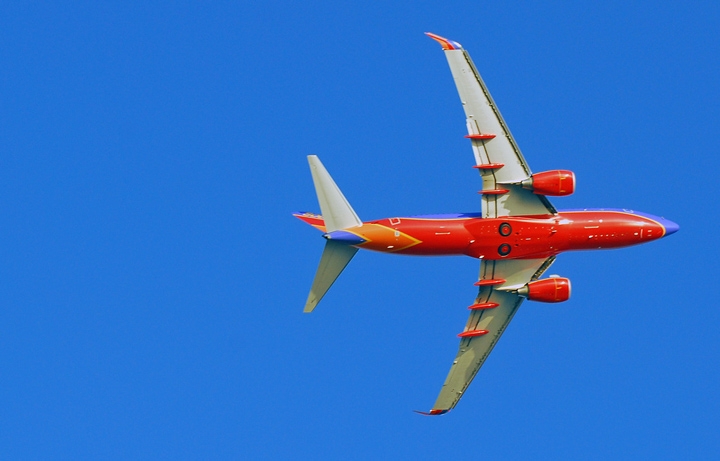 “It’s a credibility issue,” Corinne Le Quéré, a researcher at the Tyndall Centre, said in an interview via Skype. “We’re trying to support a change in culture.”

Le Quéré, who authored a recent paper on decarbonizing climate research, starting with flying, said most climate scientists are acutely aware of their carbon footprint but that flying has become part of their routine, particularly for criss-crossing the globe in connecting with colleagues at far-flung institutions.

Of course, it’s not only climate scientists who are flying more and more each year. From 2005 to 2013, annual air travel grew from 2 billion from 3 billion passengers.

Had Le Quéré opted for an in-person interview about her work, the round-trip flight from London to New York would have emitted 3.4 tons of carbon dioxide (CO2), two and a half times the annual emissions of the average person living in India.

While a few thousand scientists ditching their frequent flyer cards is a drop in the carbon emissions bucket, Le Quéré argues that those scientists carry a greater burden than the general public to consider their own emissions. That’s because they’re acutely aware of the risks climate change poses as well as the solutions needed.

Eric Holthaus, a writer at Slate who famously gave up flying after reading the Intergovernmental Panel on Climate Change’s most recent report, said if scientists lead by example, it can help make climate change and its solutions more tangible.

“Climate change is a more scientific or abstract than a lot of problems that are top 10 political issues. It helps to have visible leadership in the way people can relate to,” he said.

Max Boykoff, a researcher at the Center for Science, Technology and Policy at the University of Colorado, said it goes even one step further than simply relatability.

“Their [climate scientists] actions may have limited discernible influence in terms of 'bending the curve' on emissions, but their efforts to 'walk the talk' have tremendous symbolic value,” he said. “Moreover, because this has become such a politically charged and high-stakes issue, their actions are scrutinized much more than those who aren't studying the problem.”

Making symbolic decisions does come with real world tradeoffs, however.

Le Quéré said turning down a speaking engagement can be off-putting to event organizers and as the current system is structured, can deprive scientists of time with their colleagues, which is invaluable for stimulating new ideas and connections. 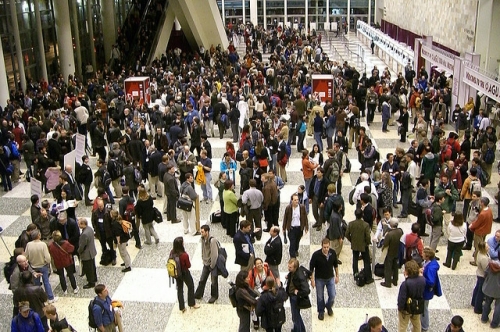 Crowds at the American Geophysical Union Fall Meeting, which attracts up to 30,000 researchers.
Credit: Vincent Noel/flickr

Katharine Hayhoe, a climate modeler at Texas Tech who is also heavily involved with climate change outreach and education, said when she does fly, she tries to minimize the carbon intensity by booking as many meetings as possible. Writing from a visit to Utah, she said she had 6-8 engagements every day over her four-day trip, resulting in an estimated 35 pounds of CO2 per event or about the equivalent of driving the 40 miles from Ogden, Utah to Salt Lake City.

Another tradeoff scientists must weigh is their ability to raise social consciousness about climate change, and whether that’s best achieved by making themselves as visible as possible, or serving as examples on how to live more sustainably.

“If you ask whether I personally believe I should reduce my emissions or reach more people, the answer for me is ‘yes,’ I look for ways to do both, and balance the costs and benefits,” Richard Alley, a climate scientist at Penn State, said.

Some conferences such as the American Geophysical Union’s (AGU) annual meeting, which draws 30,000 researchers from around the world, are offering video on demand and watch parties at universities so researchers don’t have to travel to participate. The use of Twitter and social media has also made interaction easier, including new live-streaming apps such as Periscope.