In 2014, the federal government set aside $3.5 trillion in outlays for myriad programs. That’s a huge chunk of change exposed to a lot of risks, and according to a new report, two of the biggest threats are the impacts climate change and a looming weather satellite gap.

The Government Accountability Office (GAO) released its biennial High Risk report on Wednesday and it chronicles 32 risks that could cost the government big time. (Spoiler: measles, ISIS and Jon Stewart’s retirement aren’t on the list.) But for the second report in a row, climate change and gaps in weather satellite data are as they continue to remain outstanding threats to government infrastructure and national security. 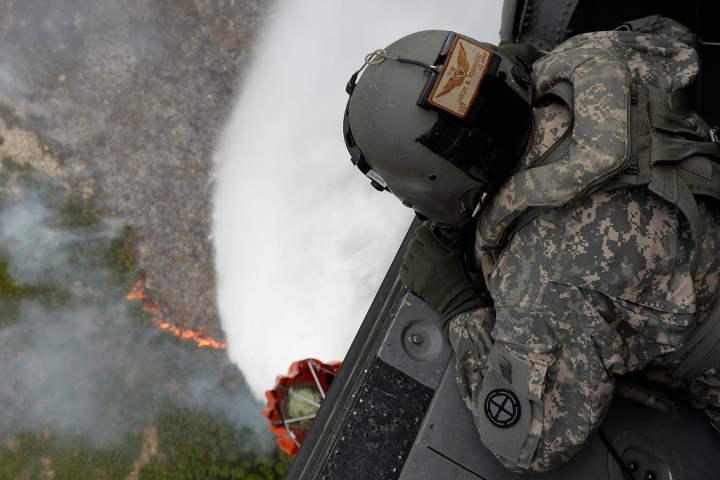 A member of the Utah National Guard responding to a wildfire in July 2014. Wildfire management appropriations have tripled since 1999, averaging roughly $3 billion in recent years.
Credit: U.S. Army/Flickr

“We have found that climate change presents a significant financial risk to the federal government. Among other reported impacts, climate change could threaten coastal areas with rising sea levels, alter agricultural productivity, and increase the intensity and frequency of severe weather events,” Alfredo Gomez, director of GAO's Natural Resources and Environment division, said.

To date, the complexity of climate change has been tough for the federal government — or any government, really — to unravel and address.

The GAO report highlights the threat climate change poses to federal property, and insurance and disaster relief programs. In fact, the National Flood Insurance Program is so at risk of going underwater — last year, the program was $23 billion in the red — that it warranted its own chapter in this year’s report. The GAO also said the government is still lagging in its efforts to be the provider of information to decision makers, and coordinating actions to reduce climate risks nationally.

At the property level, the military alone has over $850 billion in real estate under its purview. A GAO report released last year showed that climate change is already affecting some of those properties, and that while some headway has been made to insulate them from the impacts of climate change, there are still roadblocks to planning (not the least of which is the fact that there are more than 555,000 military facilities globally).

Other federal agencies face similar hurdles. The report calls out NASA’s coastal installations, which face threats from rising seas, and the 650 million acres of land that federal agencies manage. Those, too, face a variety of threats from shifting ecosystems, rising forest fire costs, and droughts that could affect grazing rights.

Obama’s Climate Action Plan and recent executive order to consider rising seas’ impact on new federal construction represent a step in the right direction, the report said. But the common thread that makes all these issues such a challenge to address is the need for specific, local information, and a lack of legal infrastructure for how to incorporate climate projections into future planning. 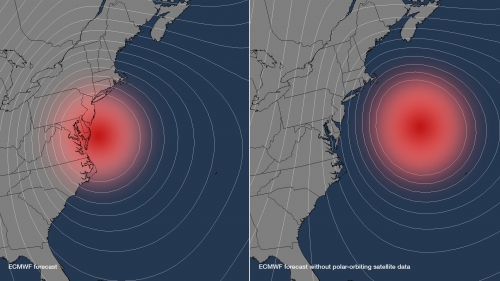 The Hurricane Sandy forecast from European weather model with and without the polar-orbiting satellite data.
Click image to enlarge. Credit: NOAA

In comparison, the satellite gap is a more clear-cut, though still pressing, issue. While there has been some improvement, including upgrades to weather models for integrating satellite data, GAO still identified a gap of at least a year where the National Oceanic and Atmospheric Administration (NOAA) could be without polar-orbiting satellite capabilities. That’s shorter than the 17- to 53-month gap first identified by GAO in 2013 but longer than the three months NOAA has said it could last.

Polar orbiting satellites provide the majority of the data used to run weather models. Any gap would affect not only NOAA’s own models, but those run by others such as the European Union, and forecasts would likely suffer. Geostationary satellites, which continually remain in orbit above one location, also provide crucial weather information. While there are no gaps in coverage expected, any delay in a satellite expected to be launched in 2016 could leave NOAA without a backup for their current fleet of geostationary satellites. The report recommends having a stronger action plan in place should NOAA be stuck without a backup.