As negotiators gather in Peru for a critical round of climate talks, U.S. delegates are straining to explain what they call a “counterintuitive” reality: For next year’s global climate agreement to be effective, commitments made under it must not be legally binding.

Such an outcome would disappoint many, including the European Union’s negotiating team, which says it will be pushing for binding commitments during the United Nations Framework Convention on Climate Change talks in Lima this week and next. America’s negotiators are pushing for voluntary commitments.

The success of the next climate agreement, which is due to be finalized during talks in Paris one year from now, may hinge on American negotiators winning in this latest spat in a long-simmering quarrel with their European counterparts.

That’s because of the supersized role that the U.S. would need to play in solving the climate change problem, and because of the global knock-on effects of political gridlock in Washington, D.C., combined with the widespread resistance from Republican lawmakers to address the role of fossil fuel burning in warming the world.

If climate-salving measures agreed to by nations during the next year of negotiations are to be legally binding under international law, the agreement reached in Paris would need to be formalized as a treaty. And signing the U.S. onto such a treaty is regarded as impossible.

“If countries make legally binding commitments to reduce emissions, then there would be a very good argument that it should go to the Senate before the U.S. joins,” Daniel Bodansky, a senior sustainability scholar at Arizona State University, and a leader of its Center for Law and Global Affairs, said. “If it doesn’t have legally binding commitments then it’s more unclear. Arguably, it doesn’t have to go to the Senate.”

For the U.S., which directly produces more climate pollution every year than any other country except China, to enter into a new international treaty, 67 members of its 100-person Senate would need to vote in favor of ratification. That body will be controlled in the New Year by the Republican Party, whose leaders have been sharply critical of Obama Administration efforts to reduce climate-changing pollution.

“There is no chance, there is zero possibility that the U.S. congress will ratify a binding commitment,” Yale University professor Daniel Esty, who has appointments in the university’s environment and law schools, said. 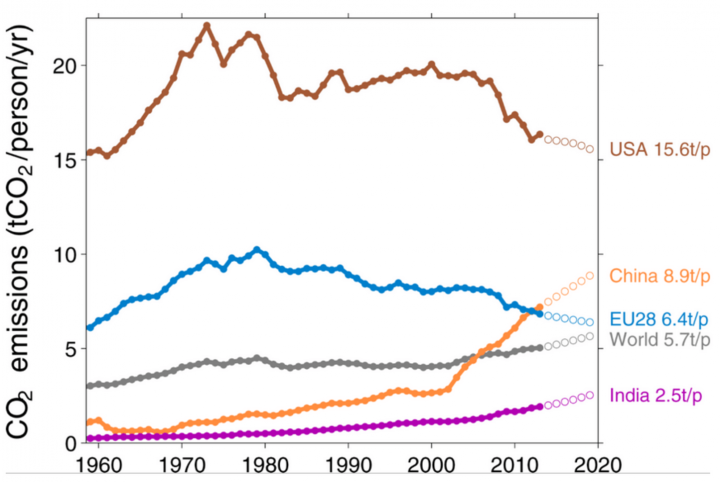 Including legally binding commitments in the next climate treaty “may make some people feel good in the European environmental community,” Esty said. But it would exclude the U.S., which, along with China, is one of the two most important players when it comes to spurring a meaningful global climate solution, meaning it would “not likely translate into a real response to the climate change problem.”

Assuming the Europeans back down, and legally binding commitments are absent from the upcoming agreement, it would be up to the nearly 200 countries and other parties to the climate change convention, such as the European Union, to formalize their commitments into their own domestic laws and regulations.

“There’s another kind of ‘binding’ that’s meaningful, and that’s binding under domestic law,” environmental economist Robert Stavins, a Harvard University professor closely involved with the climate negotiations, said. “If the U.S. puts in place an executive order, a regulation or a statute, it is bound by that under the U.S. Constitution. That’s true in all the democracies of the world. In the case of China, the analogy would be if it’s in the 5-year plan.”

That might sound like a recipe for disaster, and it would certainly be a messy and decentralized approach. But it’s worth remembering that much of the climate action around the world right now is being driven by local and state governments, which often have the closest views of the impacts of climate change and of the economic and health benefits of renewable energy. That’s helping to spur domestic policy and law changes that are starting to address climate change in meaningful, albeit dangerously insufficient ways at regional levels. 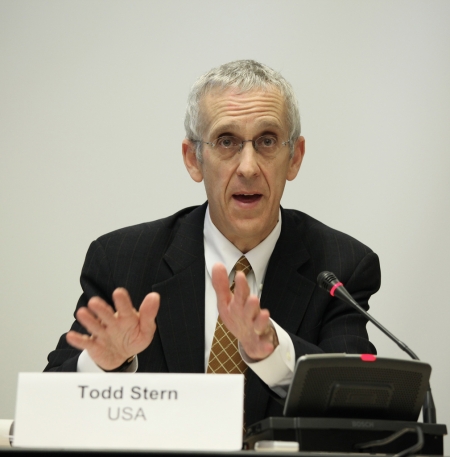 State Department official Todd Stern, who leads the U.S. climate negotiating team, pictured here at a 2010 press briefing, told reporters this week that keeping legally binding committments out of the next climate accord sounds sounds “counterintuitive,” but that it's “a way to get everyone in.”
Credit: Eric Bridiers/flickr

The Obama Administration is moving to reduce its nation’s notorious climate impacts, and doing so in defiance of Congress, generally by using its powers under the 1970 Clean Air Act. It is proposing and implementing rules and regulations to reduce pollution produced by power plants, refrigerants, cars and trucks, fracking operations and other sources of greenhouse gases.

To meet the U.S.’s likely commitment under the next global climate agreement, which would be to produce 26 to 28 percent less greenhouse gas pollution in 2025 than was the case in 2005, Jake Schmidt, director of the Natural Resources Defense Council’s international program, says the government would need to take additional steps — beyond those already announced. He says it could do so without the support of Congress.

Such a decentralized strategy for pushing forward with climate action is known as a bottom-up approach, and it has emerged as an essential ingredient in the upcoming climate agreement. Early next year, nations are set to declare and finalize their own commitments to slow climate change under the upcoming agreement. In the case of rich countries, that will mean reducing annual greenhouse gas pollution rates. For developing countries, it will generally mean slowing the rise in annual pollution rates.

By contrast, the Kyoto Protocol, the only global climate pact ever struck, covering the years 2008 through 2012, was dominated by a top-down approach. It imposed generic and legally binding pollution reductions on groups of countries, but it failed to deliver meaningful climate benefits. American lawmakers refused to ratify the treaty and the developing world was not required to do anything under it to address rising pollution levels. Perhaps more illustrative of the potential ineffectiveness of a legally binding new treaty, though, was Canada’s withdrawal from the Kyoto Protocol after it became clear that it would fail to live up to its obligations under it. That freed Canada from the threat of any penalties that could have been imposed for its failure.

“I believe we need to shift gears and try something new,” Esty said in a September New York Times op-ed that advocated a heavily bottom-up approach to the next climate agreement. 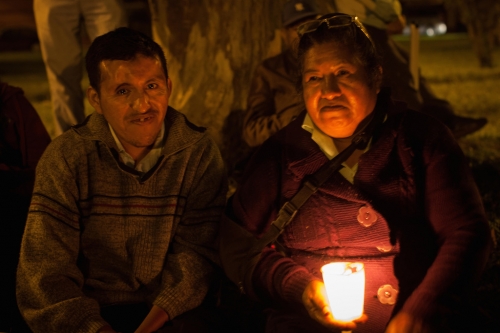 A vigil for the climate was held in Lima before the U.N. meeting began.
Credit: Our Voices/flick

None of this means that the next climate agreement will be entirely free of any international legal obligations. Rules dealing with how nations’ pollution rates are measured and verified, for example, could be made to be legally binding without the need for a new treaty

Such binding measures could leverage existing agreements under the U.N. Framework Convention on Climate Change, which was ratified by the U.S. in 1992 under the leadership of Republican President George H. Bush.

“What are the rules for monitoring, reporting and verification? What are the accounting standards we’re going to use?,” Nathaniel Keohane, the Environmental Defense Fund’s international climate vice president, said. “All those things are essentially already under the framework convention. What the U.S. has said is that, from the U.S. point of view, we can have something that is legally binding — as long as it doesn’t require us to send something new to the Senate for ratification.”