For the stamp collector in search of an accurate portrayal of the globe’s oceans, look no further than the new U.S. Postal Service international Forever stamp. Released to commemorate Earth Day, the stamp features a snapshot of how high-tech climate models depict oceans. 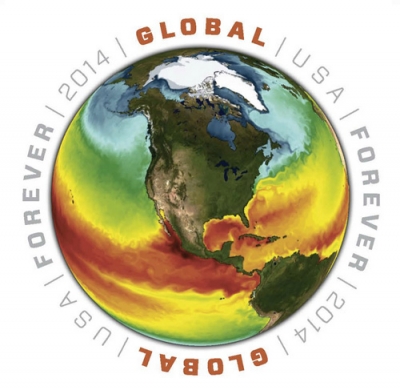 The Postal Service has a citizen advisory committee (who knew?) that looks for stamp subjects that reflect key moments, people, and innovations in American history according to Joshua Colin, Eastern Area vice president for the Postal Service.

“This year's Earth Day stamp celebrates the important role that science is playing in our understanding of the Earth, the oceans and our climate,” Colin said in a press release.

In particular, climate models served as the inspiration for this stamp. Postal Service representatives reached out to scientists at the Geophysical Fluid Dynamics Laboratory after seeing an animation of the Earth’s ocean surface temperatures based on models they created.

The original animation spanned 4 years and was designed for Science on a Sphere, a room-sized 3-D display of globe’s climate and oceans. The Postal Service chose a typical July day from the animation, flattened it out and shrank it. The result is this year’s Earth Day stamp.

Climate change isn’t necessarily new to the world of philatelists. The United Nations issued climate change stamps in 2008. Tuvalu, which generates enough of its income from stamps to warrant a mention in the CIA Factbook, and other island nations have also created climate-themed stamps with occasionally dire imagery. Climate graphs have even made an appearance, with the British Antarctica Territory issuing stamps that show both the change in mean summer air temperature since 1950 and temperature reconstructions based on ice core data going back 800,000 years.

But this is likely the first stamp to depict the results of climate models. Given that the oceans are drivers of the world’s climate and also highly sensitive to climate change, it’s fitting that this year’s Earth Day stamp is an international Forever stamp that can be used to mail letters anywhere in the world.

You May Also Like
‘Oldest Living Things in the World’ Tell a Tale of Climate
Hot West, Cold East May be the Norm as World Warms
April Will Be First Month With CO2 Levels Above 400 PPM
U.S. GHG Emissions at Lowest Level in 20 Years