Staving off the worst impacts of climate change by investing in clean energy and smart climate adaptations makes economic sense, but a new report shows that investments are still lagging globally. At the same time, the dropping costs of clean energy, particularly solar, mean that companies are doing more with less. 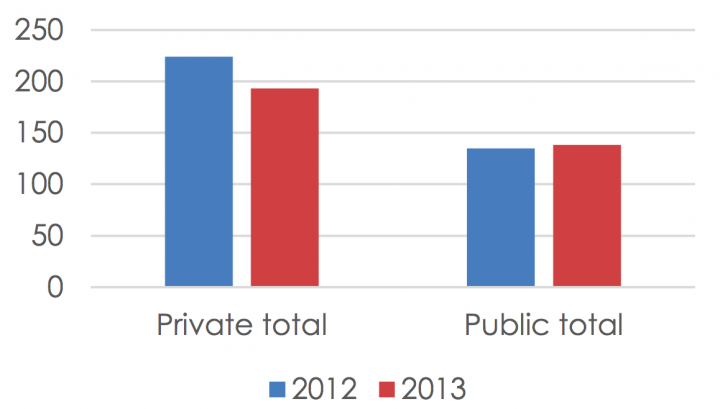 Private and public climate finance investments in 2012 and 2013 in billions of dollars.
Credit: CPI

All those numbers are far below International Energy Agency estimates, which indicate that more than $1 trillion a year needs to be invested in clean energy annually if the globe is stay below the “safe” warming threshold of 2°C (3.6°F) identified by scientists and policymakers.

Private investments fell further than public ones, though private firms still account for 58 percent of all climate financing, the report showed. All $191 billion of those dollars are going to renewable energy. In general, renewables, energy efficiency and transportation received more than 90 percent of all climate dollars, Euros, yen and Swiss francs, with the rest going to adaptation efforts. In part, that split reflects the financial return on investment that energy projects offer to investors along with what can happen when clear governmental policies such as carbon markets favor clean energy investment.

“Our work shows that when public policies and resources balance risks and returns, private money follows. The private sector accounts for the majority of climate finance and there is clearly appetite from the private sector to invest if it makes economic sense to do so,” Barbara Buchner, the economist who leads CPI’s climate finance program, said.

The economics have created a bit of a perverse incentive that partially explains the drop in climate finance. Cheaper technology, particularly the falling cost of solar panels, means that investors (and companies) are able to do more with less. In the case of solar panels, 2013 saw a 30 percent uptick in their installation despite private investments shrinking by about 14 percent compared to 2012, Buchner said. Cheaper technology accounts for 80 percent of the drop in private sector cash flows to clean energy. 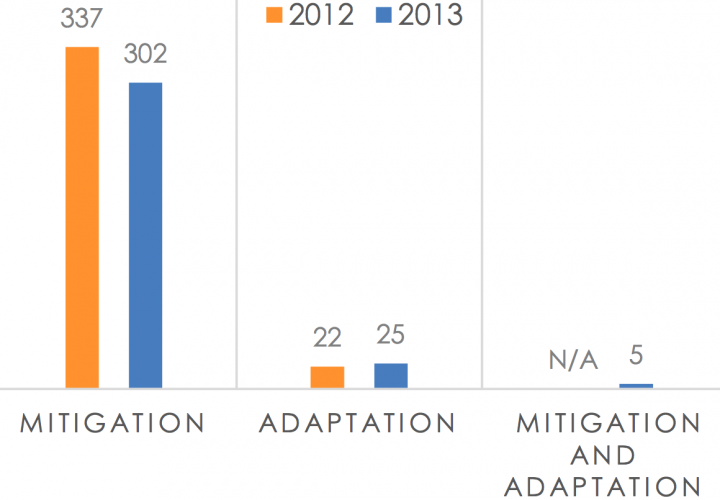 Investments in clean technology and climate mitigation versus adaptation projects in 2012 and 2013 in billions of dollars. Credit: CPI

Investments have been fairly evenly split between developed and developing countries, reflecting a global push for clean energy and not one driven wholly by one country or region, according to the report. Most money is also staying in their respective countries, with foreign aid making up only a small portion of climate finance.

That doesn’t mean the global state of climate finance doesn’t matter. As the world prepares for international climate talks in Lima, Peru, next month, Buchner said the report is also a reminder that “the world is falling short of even conservative projections of investment levels needed to limit a change in temperature to below 2°C.”

That shortage includes a current gap in funding for the United Nations-run Green Climate Fund, which is billed as a pot of money pledged by developed countries to help developing countries reduce their emissions and adapt to climate change. The U.S. pledged up to $3 billion to the Fund last week but the fund is still short of its $10 billion goal for this year and its long-term goal of $100 billion.

You May Also Like:
2014 Set for Record Hot; Record Cold Thing of the Past
China Pledges to Slash Coal Use
‘Green Revolution’ Brings Greater CO2 Swings
World Needs to Mind the Carbon Emissions Gap