It’s been a year marked by hurricane records. The northern hemisphere saw 31 major cyclones, crushing the old record of 23 storms. Yemen got hit by two rare cyclones while the U.S. saw another year pass — that’s 10 years and counting now — without a major hurricane making landfall. That includes Hawaii, which dodged not one or two, but 15 named storms this year.

So it’s only fitting that the climate image of the year catalog a blockbuster moment. 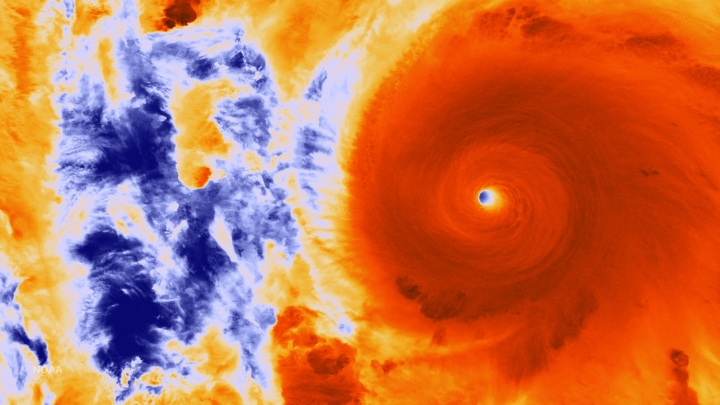 In October, Hurricane Patricia became the strongest hurricane ever recorded in the western hemisphere. It grew from a tropical storm to a hurricane in the span of a few days and became a roaring Category 5 storm — the highest level on the Saffir Simpson scale — with winds up to 200 mph before slamming into Mexico.

The storm’s pressure also dropped to 880 millibars. Pressure is another measure of storm intensity — the lower the pressure, generally the stronger the storm — and only one other storm has ever had lower pressure measurements (that would be Typhoon Tip, which bottomed out at 870 millibars in 1979).

The colorful image shows the storm as it neared peak intensity on Oct. 23, with the tiny eye peaking out in the middle of the infrared-enhanced red and orange clouds.

The reason for Patricia’s remarkable rise was a patch of abnormally warm water in the eastern Pacific. Water temperatures reached up to 86°F (30°C) providing the fuel necessary for the storm’s rapid intensification from tropical storm to Category 5 hurricane (though some argued it could be called a Category 7).

The warm water is partly a function of El Niño, which tends to heat the ocean in the eastern Pacific, but climate change also likely played a role. Ocean temperatures are the warmest they’ve ever been recorded because much of the extra heat the planet is accumulating is ending up in the seas. That’s why scientists, while expecting fewer overall hurricanes, project more super intense ones like Patricia as the planet continues to warm.

Despite Patricia’s record-setting nature, the storm did relatively little damage as it came ashore in a sparsely populated section of the Mexican coast. But the record-setting storm could offer a glimpse of what’s to come. And the next time we might not be so lucky.