Following a scientific review that was published by the United Nations this year, and following intense campaigning led by island and other low-lying nations in negotiating halls and on social media, the idea has become a popular one during the second and final week of the key round of U.N. climate talks. 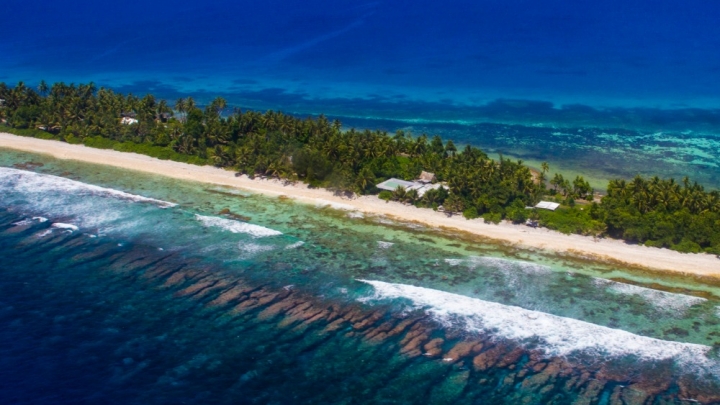 An island in Tuvalu, a nation vulnerable to rising seas.
Credit: Nick Hobgood/Flickr

Delegates from the U.S., Canada, China and the European Union have all expressed support in Paris for including a 1.5°C goal in what could be an historic new climate pact, the Guardian reported.

Fossil fuel burning and other industrial activities have already raised global temperatures by an average of 1°C since the 1800s, pushing sea levels up more than 8 inches. Island leaders worry that 2°C of warming will render their nations uninhabitable or entirely sunk; they point out that similar fates could befall major coastal cities, such as New York and London.

“Science is becoming very, very clear,” Enele Sopoaga, prime minister of the small island state of Tuvalu, said Tuesday. “We have” to keep warming to less than 1.5°C “or we are all condemned.”

The latest draft of a hoped-for Paris agreement, released over the weekend, contained two options for a temperature goal — “below 1.5°C” or “well below 2°C” above pre-industrial levels, both of which might be included in a final version.

“We are working with other countries on some formulation that would include reference to the 1.5 degrees, all as part of a somewhat larger, broader sentence,” lead U.S. negotiator Todd Stern told reporters. “We are working with our island friends and other developing country friends in crafting language.”

If negotiations stay on schedule, it may become clear on Friday whether the ambitious goal will be formally adopted at the U.N. That’s when the talks are scheduled to finish, though similar meetings in previous years have spilled into weekends.

Preventing warming from exceeding 1.5°C would require a radical and rapid switch to cleaner sources of energy, and it may also require the types of geongineering projects that leading scientists this week described in a journal paper as “risky.”

Sopoaga said the proposal to include the 1.5°C goal in a Paris agreement is receiving little resistance.

“I want to remain optimistic,” Sopoaga said, describing those who have derided the goal in news stories and on social media as impossible to achieve as “totally irresponsible.”

You May Also Like:
Here’s How Much of Alaska’s Permafrost Could Melt
Europe, U.S. Poised to Resolve Key Climate Discord
Study Sees Possible Decline in Global CO2 Emissions
Astronauts Send a Message to Paris Climate Talks