The torrential rains and catastrophic floods that raged through parts of Bosnia and Herzegovina, Serbia, and Croatia were unprecedented in the historical record of the region, going back 120 years. But extreme weather events like this one are something communities may have to contend with more and more as the planet warms, experts say.

Flooding in the Serbian town of Obrenovac, near the capital Belgrade, on May 19, 2014.

The flooding event began on May 13 when an area of low pressure developed as warm, moist air from over the Mediterranean Sea clashed with colder air from the north. The low became cut-off from the jet stream, which would ordinarily usher the system across the region — instead, it remained parked over southeast Europe, dumping rain for several days.

Authorities in Bosnia and Serbia reported that about 4 inches of rain fell on May 14 and 15, with larger downpours in some locations. In just a few days, some areas received an amount of rain equivalent to one third of their annual total, said Steven Bowen, an associate director and meteorologist with the reinsurance group Aon Benfield.

“We’re looking at a pretty unprecedented event,” Bowen told Climate Central. It was at least a 1-in-100 year event for the region, he said.

The flooding was so bad in part because the region had already seen unusually strong rains since mid-April, so soils were saturated and unable to soak up some of the tremendous excess. Instead, water went crashing down slopes and into numerous streams and rivers of the Danube watershed, many of which breached their banks and set record flood levels.

Dozens of deaths have been reported in the affected countries, and initial estimates of the total damage are more than $1.4 billion. The floodwaters have also washed away the signs that warn of fields of landmines planted during the Balkan wars of the 1990s, and may have washed some of the mines themselves into the Danube watershed, according to news reports. 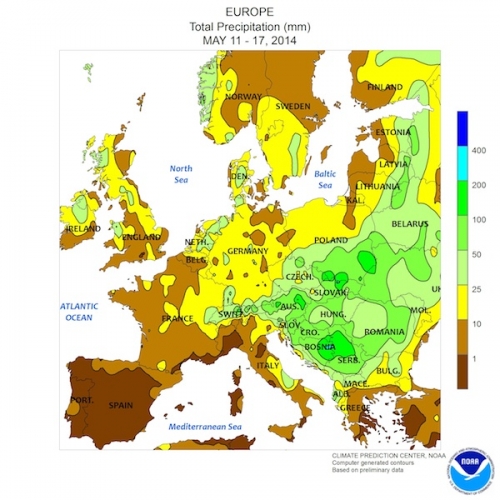 The torrential rains experienced in parts of southeast Europe are evident in this map of rainfall totals across Europe from May 11-17, 2014.
Click image to enlarge. Credit: NOAA

The effects could have been worse, though, as the event was well forecast by European and local meteorological agencies, said Dimitar Ivanov, a meteorologist with the World Meteorological Organization. The WMO has worked in the region to better train meteorologists to forecast extreme weather events and to improve communication between forecasters and civil authorities, Ivanov, who has been involved with that work, said. In this case, Serbian and Bosnian authorities both issued a “red warning” (the highest warning level) for rains and flooding through MeteoAlarm, a platform aimed at providing comprehensive weather warnings across Europe, and which Bosnia just recently joined.

“I believe that the information that was provided in advance of this particular event really helped to minimize the losses,” Ivanov told Climate Central.

The WMO’s efforts to improve forecasting and disaster management have, in part, been aimed at climate adaptation in the face of the effects of global warming. Extreme weather events like this one could become more common in the future in Europe, the latest report from the Intergovernmental Panel on Climate Change concluded.

The Balkans have experienced quite a few climate extremes in recent years, Ivanov said. The winter of 2011-2012 was one of the coldest, harshest winters in decades, and was followed by an extremely hot, dry summer that featured the worst drought in 40 years and helped fuel rampant wildfires, according to a Huffington Post article at the time.

“So we can see what is quite obviously a trend” of extreme weather, Ivanov said. 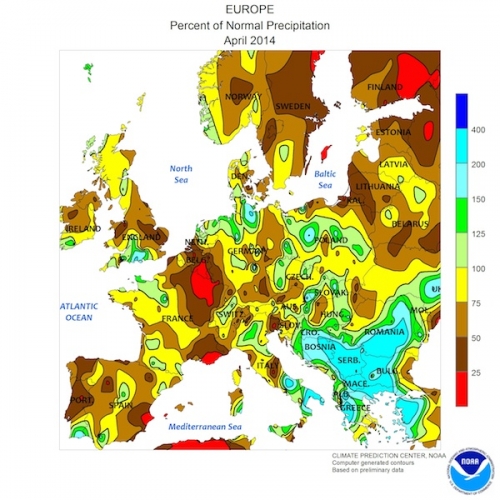 Southeast Europe had already seen higher-than-normal precipitation in the month of April 2014, setting the stage for the catastrophic flooding that struck parts of the region in May.
Click image to enlarge. Credit: NOAA

In particular, the IPCC notes that extreme rainfall events are expected to become more frequent. As Earth’s atmosphere warms with increasing amounts of greenhouse gases, the amount of water vapor within it increases, weighting the dice toward more substantial downpours even in areas that are expected to become drier in the long term. Every region of the U.S. has seen an increase in heavy downpours, for example, with the most recent occurrence coming last month in Florida, when a storm system dumped 10 to 15 inches of rain the Pensacola area in just 24 hours.

More heavy downpours could increase flooding risks that “without adaptive measures, will substantially increase flood damages,” according to the IPCC.

In fact, the economic damage wrought by river floods has increased in recent decades as more development in floodplains has put more people and infrastructure in harm’s way, the IPCC noted. For example, the major floods that struck central Europe last year caused $20 billion in damage, Bowen said. All of which points to the need for better flood protection, he said, not just in these parts of Europe, but across the world.

“I think countries kind of need to be a little more proactive in terms of preparing for these kinds of events,” he said.