When the heavens opened over several Himalayan foothill states in northern India for four cataclysmic days last summer, they rained unprecedented hell over villagers, and over streams of pilgrims visiting temples and other holy sites.

Floods and landslides tore vulnerable buildings and villages from their feeble riverside roots, flushing their ramshackle remains downstream. They left an estimated 100,000 without shelter or food, in many cases for more than 10 frigid and soggy days, and stole away the lives of more than 5,000 of them.

Flood destruction in the holy Hindu town of Kedarnath on June 18, 2013.

The results of one of the most thorough scientific examinations of the meteorological events that led to the record-breaking rainfall and ghastly floods, which hit the Indian state of Uttarakhand harder than any other, were published this week in an annual extreme-weather report of the Bulletin of the American Meteorological Society.

The Stanford University-led research unearthed tenuous links between the tragedy and rising greenhouse gas levels. Perhaps more strikingly, however, the paper helped to illuminate the institutionalized vulnerability of vast swaths of mountainous Asia — where tens of millions of humble-living residents contribute little to global warming — to the vagaries of a climate that’s increasingly prone to turn vicious.

“Over the years, people built structures right up to the water,” said Balaji Rajagopalan, a University of Colorado at Boulder hydrology professor. He was not involved with the study, but his research focuses heavily on India and its yearly monsoon. “Given the steep topography and unstable ground conditions, it doesn’t take a whole lot to produce a catastrophe.”

Similar ad hoc waterfront building booms and emergency response limitations worsened the effects of flooding in Pakistan in 2010, in the northern Indian state of Jammu and Kashmir last month, and in countless lower-profile disasters throughout the region in recent years.

“The way these governments respond to the disasters, it’s evident that ‘desirable preparedness’ for disasters remains far-fetched,” said Athar Parvaiz, a Kashmiri journalist. His family can’t yet return to its flood-damaged home in the hard-hit city of Srinagar, parts of which remain inundated a month after heavy rains.

“The disasters of Uttarakhand last year, and the recent one in Jammu and Kashmir, were looming for years,” Parvaiz, whose cell phone service hasn’t been restored after the rains, told Climate Central in an email. He said that’s because of a “sheer lack” of urban planning, and the building of homes and businesses “very close to, or right in the way of, rivers and wetlands.”

The new paper investigated one of three main possible links between the Uttarakhand floods and climate change. The researchers used models to demonstrate that such heavy June rainfall might have been made more likely by global warming.

The researchers briefly described how tenuous mountainside lakes, some of which are left behind by receding glaciers, erupted in torrents of muddy floodwater. Such ruptures appear to have washed away parts of Kedarnath, home to Kedarnath Mandir, a temple that’s popular with pilgrims, although it’s unclear what role climate change played in forming those lakes.

Left unexplored by the paper were the possible links, which have been described in other research, between global warming and changes to the Indian monsoon. The paper does, however, explain how the unseasonably early monsoonal rain melted layers of thick snow that still coated hillsides, amplifying the floodwaters.

A high-pressure system that formed in the upper atmosphere over Central Asia pushed cool and dry air into the upper atmosphere over northern India. Meanwhile, low-pressure systems formed over the oceans on both sides of the Indian subcontinent, ushering moist and warm air into the lower atmosphere. These three forces, reminiscent of monsoon season, conspired to produce an unstable atmosphere that, combined with the montane terrain, led to conditions that the scientists said in their study were “ripe” to produce torrential rain. 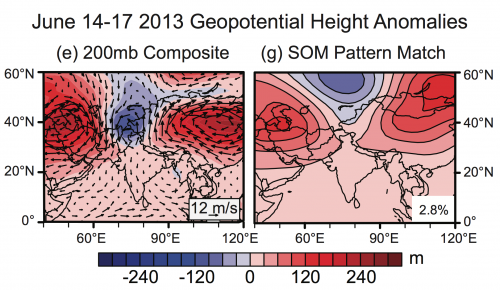 By analyzing weather records, which only stretched back six decades, the researchers concluded that the heavy June rainfall was a once-in-a-century-or-so phenomenon.

The researchers compared the rainfall records with simulations of the current climate, and with those of a climate that hadn’t been affected by humans. The results of the comparisons were mixed. But when the team focused on the three models that they decided were best suited for simulating regional precipitation, they concluded greenhouse gases had “increased the likelihood” of such rainfall.

That alone doesn’t mean climate change played a role in the disaster. The scientists noted that their findings were limited “by the resolution and ensemble size” of the small number of models “that credibly simulate the seasonal rainfall” over the region.

Rajagopalan analyzed the study and told Climate Central that he disagreed with the paper’s climate change conclusion. He doesn’t think there was enough evidence linking climate change with the rainfall. But he praised the authors for including their statement regarding the conclusion’s limitations.

“The climate models for rainfall are pretty bad,” Rajagopalan said. “I’m fine with all the analysis. The only thing I would have an exception with is making that conclusion. Sometimes you just have these things all lined up, and, there you have it, it’s a big event.”

The melting effect of the early rains

What would have been heavy rainfall in Uttarakhand last summer was worsened by the addition of heavy snowmelt, the new paper notes, because of the melting effect of rain that arrived earlier than usual. 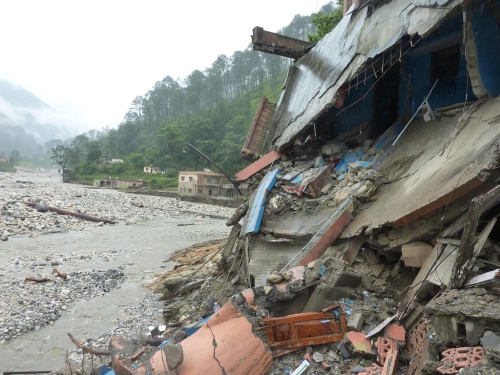 Changes to the Indian monsoon, which are thought to be driven by global warming, already appear to be affecting Indian farmers, who say they can no longer rely on predictable rainfall patterns of yore.

The flooding might also have been made worse by the melting of glaciers in a warming region.

“If the monsoon onsets earlier, which is what happened last year, and it’s interacting with when snow and glaciers are melting, or there are these glacial lakes that are forming, then that interaction is likely to increase these major flooding events,” said Deepti Singh, a Stanford University doctoral student who led the new research.

But it isn’t clear whether the early arrival of last year’s monsoonal rains to northern India was caused by climate change. That was not studied. Most other research in this area suggests that the Indian monsoon will arrive later as the climate continues to change — more often than it will arrive earlier.

As glaciers retreat back up mountains throughout the Himalaya, they are causing thousands of glacial lakes to form in the divots that they carved out as they expanded down mountainsides. These lakes are often held in place by fragile walls of rubble that were piled up by the once-downward thrusting noses of the now-melting glaciers. When the rubble that holds a glacial lake in place breaks down, often as the lake brims with floodwater, it can trigger deadly floods in downstream villages.

Analysis of satellite imagery published last summer in The Landslide Blog, which is hosted by the American Geophysical Union and written by U.K. scientist Dave Petley, graphically shows how the rupture of at least two lakes associated with glaciers contributed to one of the most devastating floods in Uttarakhand.

It’s unclear, however, whether climate change had anything to do with the creation of the most important of those lakes, Chorabari Lake. Wadia Institute of Himalayan Geology scientist D.P. Dobhal, who has studied the lake and its adjacent glacier, says its creation was the result of more natural phenomena.

“There was no contribution from the Chorabari glacier, as the level of lake was higher than the glacier termini,” he told Climate Central. Nonetheless, the effects of its rupture last June are not being questioned. An avalanche associated with the floods destroyed part of the fragile wall holding the 60-plus-foot deep lake in place, draining it in less than 10 minutes, Dobhal said, with its water gushing down the mountainside, where it tore apart edges of Kedarnath. “There’s no lake now; it’s empty.”

Regardless of how Chorabari Lake formed, dangers associated with their failures are rising with the temperatures throughout the Himalayan region, from Bhutan to Pakistan, as glaciers melt away.

Regardless of whether fossil fuel burning and global deforestation produced the climatic and hillside conditions that killed so many Indians last year, it’s clear that humans played their role in worsening the disaster.

The poor urban planning that’s so prevalent in South Asia’s poor and fast-developing nations was accompanied by underfunded emergency planning, condemning many to needless death. “This is why both these disasters are widely termed as manmade disasters,” Parvaiz said.

With climate change expected to continue worsening inundations around the globe, along with heat waves and other weather disasters, emergency funding shortfalls and governance and other planning inadequacies threaten to wreak disproportionate damage on Himalayan residents — and countless others in the developing world.

You May Also Like:
A Timeline of 2013 Extreme Weather and Global Warming
NASA Ranks This August as Warmest on Record
Could 2014 Become the Warmest Year on Record?
Greenland Glaciers More Susceptible to Melt Than Thought
Melt of Key Antarctic Glaciers ‘Unstoppable,’ Studies Find