In a warming world, the U.S. could see its cities inundated with water, its power grids threatened by intense storms, its forests devastated by wildfire and insect infestations, and its coastlines washed away by storm surges.

Climate change also threatens roads, pipelines, power lines and rail lines in ways that may not be quite as in-your-face as the stark images of homes washed away on a hurricane-eroded beach. Bridges and highways can be weakened or destroyed in floods. Power lines can be burned in wildfires and damaged in major storms. Roads and airport runways are vulnerable to extreme heat, which can soften and deteriorate asphalt. 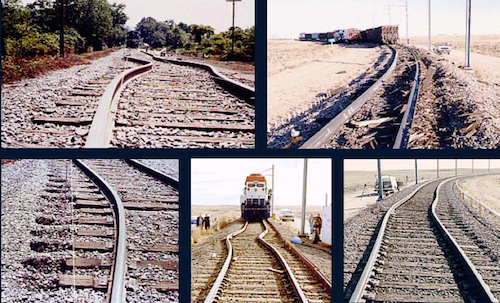 Examples of railroad track buckling from a report on the issue from the National Transportation Library.
Credit: U.S. DOT

You can add ‘sun kinks,’ or railways that buckle in extreme heat, causing derailments, to the list of things that are already taking a toll on U.S. transportation, a problem that figures to grow significantly as the U.S. warms.

As average U.S. temperatures warm between 3°F and more than 9°F by the end of the century, depending on how greenhouse gas emissions are curtailed or not in the coming years, the waves of extreme heat the country is likely to experience could bend and buckle rails into what experts call “sun kinks.” Intense heat expands the metal, curving and misaligning rails that become a danger to the trains gliding over them.

Considering the increasing amount of hazardous materials and number of passengers being transported by rail in the U.S., that could have disastrous consequences.

Passenger railroads saw a 55 percent increase in ridership between 1997 and 2012, with little slowdown expected, according to the Brookings Institution. Freight railroads are likely to see a 45 percent increase between 2012 and 2040, according to the Association of American Railroads. Railroads are currently seeing a giant increase in the amount of some hazardous materials they carry. Because of a hydraulic fracturing boom, crude oil shipments by rail spiked from 9,500 carloads in 2009 to nearly 400,000 carloads in 2013, AAR data show.

When anything goes wrong on the rails, it’s big news even without the help of climate change. Whether it’s a Metro North Railroad passenger train going off the rails in New York City or tanker trains carrying volatile Bakken shale crude oil derailing and exploding, major railroad accidents kill people and destroy property.

Climate change could make moving all those passengers and freight more challenging if it throws a sun kink into the rails.

Extreme heat and cold in a changing climate affect the stability of railroad tracks and can make them prone to buckling and lead to an increase in future derailments, said Andrew Kish, an independent railroad track stability consultant and rail buckling expert who is retired from the Volpe National Transportation System Center at the U.S. Department of Transportation.

Sun kinks have already caused more than 2,100 train derailments in the U.S. over the past 40 years, or about 50 derailments a year, on average.

Sun kinks and other track buckling incidents are among the costliest the rail industry deals with today, with damage running roughly $1 million per derailment, excluding injuries, fatalities and evacuations, Kish said.

The heat waves that scorched much of the U.S. in 2012 — the hottest year on record in the continental U.S. — and the sun kinks they created caused enough derailments that the Federal Railroad Administration (FRA) issued a special safety advisory that summer warning railroads that they should be sure to inspect buckling-prone sections of track.

Blaming “the unusually high and prolonged record-breaking temperatures” that affected much of the U.S. that summer, the advisory detailed four major train derailments that resulted from sun kinks within the span of about two weeks.

On July 4, 2012, a BNSF Railway coal train crew noticed a sunk kink in tracks near Pendleton, Texas. The crew attempted to stop, but couldn’t before 43 loaded coal cars derailed. The same day in Northbrook, Ill., a sun kink caused 31 loaded coal cars on a Union Pacific Railroad train to derail on a trestle, destroying the bridge and falling onto the roadway below, killing two people.

Another BNSF coal train, also with 31 loaded cars, derailed as it was passing through Mesa, Wash., on July 2, 2012 because of a sun kink, and on June 23 a sun kink caused a Union Pacific coal train to derail in Wyoming’s Powder River Basin.

Despite the record heat, the number of sun kink-related derailments in 2012 was 29, down from the 46 in 2011. There were 14 such derailments in 2013, Federal Railroad Administration data show, a drop the agency attributes to the safety requirements it laid forth in its 2012 safety alert.

A University of Colorado study published in April assessing the impacts of climate change on the Navajo Reservation in the Southwest said climate change-related sun kinks are a major concern for the Navajo Nation because derailments could lead to the disruption of coal production there.

Virginia Burkett, a U.S. Geological Survey scientist who co-authored a 2008 study on climate change’s impact to transportation systems on the Gulf Coast, said last week that an average temperature change of 2 or 3°F in the Gulf Coast region could have a significant effect on train tracks buckling, causing more derailments.

“Yes, you would anticipate more widespread or frequent incidents of track buckling as the temperature rises,” she said, adding that more train derailments will occur only if railroads do not find ways to adapt. 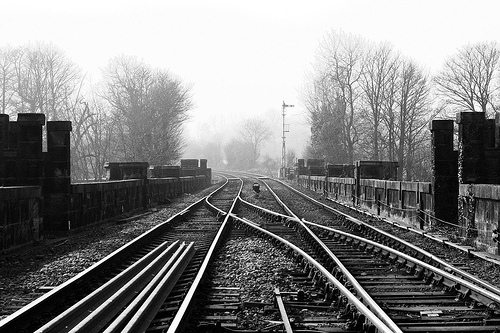 Both passenger and freight railroads have seen increases in use with little slowdown expected.
Credit: Simon J. Brady/Flickr

The four largest U.S. freight railroads — CSX, Norfolk Southern, Union Pacific and BNSF — either declined to comment for this story or did not return requests for comment.

Track buckling in extreme heat is difficult to detect ahead of time because it can happen suddenly and without warning, Kish said.

“Look, if a train derails carrying coal, no big deal,” he said, because coal trains are unlikely to cause significant harm to others nearby when they go off tracks. “But if you dump a train with hazmat (hazardous materials) or liquid nitrogen or crude oil, it starts burning. It’s a more catastrophic event.”

Bakken crude oil was found to be more volatile than oil extracted elsewhere, forcing the USDOT to issue an emergency order on May 7 requiring all railroads carrying Bakken crude oil to notify state emergency responders about the operations of those trains in their states.

The USDOT and the Federal Railroad Administration (FRA) declined to comment on how climate change may affect rail stability.

The administration’s 2012 safety advisory has helped reduce the number of sun kink-related derailments in the U.S., and the USDOT is working with the University of California-San Diego to develop devices that enable railroads to monitor rail temperatures, said FRA spokesman Michael Cole.

But Kish said any reliable technology that can accurately monitor train track stability and warn trains of damage ahead is still too early in the development stage to be deployed anytime soon.