Tornado Outbreaks Could Have a Climate Change Assist

Days with more tornadoes have become more common over the past 60 years, a trend that new research says could have a climate change connection.

Understanding the connection between climate change and tornadoes, if any, is one of the most fraught areas of research. But a study released Wednesday posits that changes in heat and moisture content in the atmosphere, brought on by a warming world, could be playing a role in making tornado outbreaks more common and severe in the U.S.

Damage in Moore, Okla., a week after a powerful tornado ripped across the town in May 2014.

Part of the challenge in examining the climate-tornado link is because individual tornadoes occur on such a small scale. There’s also just a lot of year-to-year variability that adds noise for researchers trying to look at the big picture. Tornado records can also seem deceiving as population growth and weather technology like radar have improved to help researchers identify more tornadoes. While that’s largely good, it has the potential to skew numbers.

The new research, published in Climate Dynamics, finds a way to circumnavigate those challenges to a degree. Helping refine the number of tornadoes, researchers only counted twisters that ranked as EF1 or higher on the Enhanced Fujita scale, which is used to measure tornado damage and wind speed. And rather than trying to analyze the connection between climate change and individual tornadoes, they looked at clustered outbreaks of tornadoes.

“It occurred to us that even though the annual number of tornadoes may be stationary, it’s possible there are other metrics that could be analyzed. When you start looking at the number of days in which a lot of tornadoes occur, you see change,” said James Elsner, a tornado researcher at Florida State and lead author of the study.

Specifically, Elsner and his colleagues found that the number of days with large outbreaks have been increasing since the 1950s and that a greater proportion of tornadoes are occurring in those outbreaks compared to the whole.

“The bottom line is that the risk of big tornado days featuring densely concentrated tornado outbreaks is on the rise,” Elsner and his colleagues wrote in the study.

The proportion of tornadoes occurring on the most active days is also on the rise. The study notes that these changes are similar to observations of heavy precipitation, which show that more rain is falling in extreme downpours. 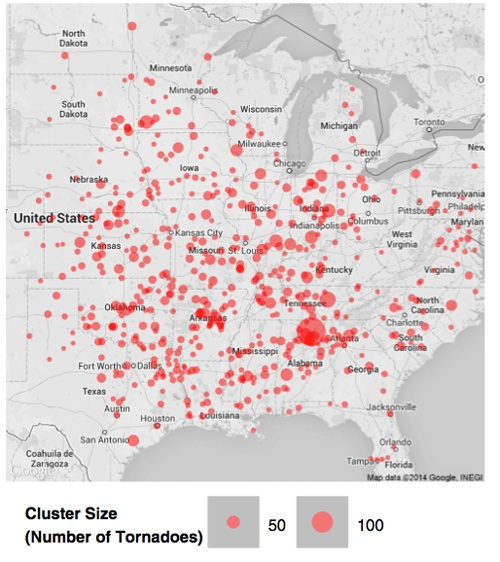 A map showing the center of all tornado clusters on days with at least 16 tornadoes from 1954-2013.
Credit: Elsner et al./Climate Dynamics

“They’re not spilling over or simply or getting over larger areas. Rather we’re seeing more densely packed tornadoes,” he said.

In other words, places that are already familiar with tornadoes have been getting more familiar with them. That’s probably unwelcome news in traditional tornado hotbeds such as tornado alley states like Oklahoma, Texas and Kansas, as well as the Ohio River Valley and the Southeast.

While the study didn’t examine the exact reason for this shift, Elsner hypothesized that it could be due to competing factors in the atmosphere, though he did note the increasing number of eyes on the ground could also be a contributing factor.

Warming throughout the atmosphere can make it more stable, which inhibits the formation of thunderstorms that can drive tornadoes. At the same time, a warmer atmosphere can hold more water vapor, a crucial component for storms to form. That means a stalemate where there are more days without severe storms, but on days when instability wins out, storms could be more powerful and spawn more tornadoes.

Other researchers aren’t quite as sure of the reasoning.

Brooks’ work is also looking at the cause and is focused more on large-scale patterns. While the cause for the uptick is certainly something to be researched and teased out in the future research, Brooks said that the general findings of an increase in the number of days with F1+ tornadoes is accurate.

Beyond untangling the causes, there are also open research questions about if clusters of tornadoes are becoming more violent or if other weather events such as hailstorms are also seeing similar shifts.

You May Also Like
Putting a Climate Context on SoCal’s Flash Foods
Indigenous Groups Give Tropical Forests a Carbon Boost
Toledo’s Algae Bloom in Line with Climate Projections
Has Your City Reached its Peak Heat Yet?
Picture This: Eerie Wildfire, Stirring Rainbow & Sharknado!