Study: Climate Not a Factor in Epic Colorado Floods

When the clouds opened up over Northern Colorado and dropped up to 18 inches of rainfall over five days in September 2013, the epic storm killed eight people, damaged or destroyed nearly 2,000 homes and broke Boulder’s 24-hour rainfall record. At the time, the thought was that such intense rain fell in line with climate change trends.

The rains that the National Weather Service called “Biblical” were thought to be possibly linked to climate change because, overall, higher atmospheric temperatures allow air to hold more moisture, leading to more extreme precipitation. It wasn’t a foregone conclusion in Colorado because extreme precipitation may vary by region. 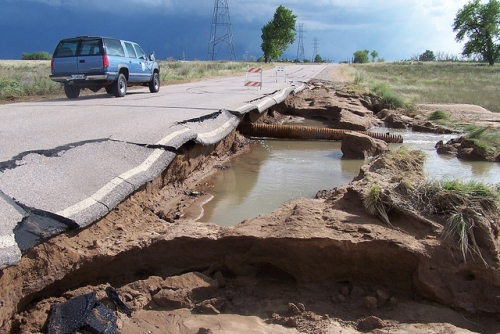 But climate change may have had little to do with those extreme rains, and global warming could reduce the likelihood that they’ll happen again, according to a new study, which is disputed by one of the nation’s most prominent climatologists.

The new study, published Monday in a supplement to the Bulletin of the American Meteorological Society (BAMS) analyzing climate change’s role in extreme weather events across the globe in 2013, uses a single computer model to reach its conclusion and says the results have yet to be confirmed by other models.

Using a computer model called GEOS-5, the study concludes climate change made last September’s rains neither more likely nor more intense. Similar events have occurred in the past before human-caused climate change was a factor in any region’s weather, the study says.

Even though other models show that climate change will lead to an increase in intensity of rainfall globally by the end of the century, Boulder and the rest of Northern Colorado’s position at the edge of the central Great Plains means that five-day rainfall at the end of the summer is actually less likely to occur in the future, the study concludes.

Colorado is “one of the few areas of the world where that seems to be the case,” said the study’s lead author, Boulder-based National Oceanic and Atmospheric Administration research meteorologist Martin Hoerling, who called the results surprising.

“While we had not necessarily assumed that increasing water vapor in the atmosphere had been a key factor, it showed us that more moisture in the air is not a sufficient condition for increasing rains,” he said.

The study did not explain why the Great Plains would see a decline in the probability of intense rainfall, but Hoerling said Intergovernmental Panel on Climate Change models project the probability of five-day precipitation events decreasing slightly over the central Great Plains even in the scenarios projecting the most intense carbon dioxide emissions through the end of the century.

He said the local geography, where the Great Plains end abruptly at the point where the Rocky Mountains rear skyward out of the prairie near Boulder, lends itself to greater precipitation due to the orographic effect. The orographic effect is the way landscape topography, mountains in Colorado’s case, affects local weather.

Hoerling cautioned that more research needs to be done to confirm his team’s findings, and the study should not be viewed as the final word on climate change’s role in the Colorado floods.

“We don’t have a lot of answers,” he said. “It raises more questions.”

One critic of the study, which was announced with a news release under the headline, “Climate Change Not to Blame for 2013 Colorado Floods,” didn’t mince words after it was published.

Explaining Extreme Events of 2013 From A Climate Perspective

“There is no justification for the headline of the news release at all, and the study has little relevance to the flood in Colorado in September 2013,” said National Center for Atmospheric Research senior scientist Kevin Trenberth, who is also based in Boulder. “They ask the wrong questions, do the wrong analysis with inadequate tools and come up with the wrong answer.”

In any extreme rainfall event, the weather situation is always the main player in how such a storm develops, but says nothing about the role of climate change, Trenberth said in a written statement.

“They do note the importance of having abundant moisture in the region in order to produce high enough rainfall amounts,” he said. “But they fail to analyze where the moisture comes from.”

Water vapor above Denver hit a record during the rains at the same time as sea surface temperatures south of Baja California, Mexico, were briefly 30°C, about 1°C warmer than normal, making it the hottest spot for the ocean in the Western hemisphere, Trenberth said.

“An incredible 75 mm of moisture was recorded in the atmosphere in that region by NASA satellites,” Trenberth said in his statement. 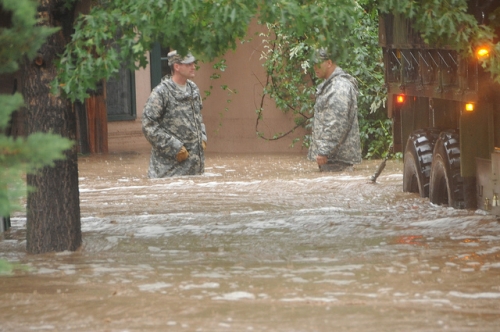 High sea surface temperatures (SSTs) led to the large-scale convergence of moisture into the region, and it was siphoned north by a very unusual pattern in the atmosphere creating a large river of moisture flowing straight toward Colorado, he said.

“I think there is no doubt that those extremely high SSTs and record water vapor amounts likely would not have occurred without climate change,” Trenberth said. “This study is largely irrelevant; it misses the big picture and gets the wrong answer.”

Hoerling said the study's model accounted for high sea surface tempertures in the Pacific, the river of moisture flowing toward the state and other factors. He said he is perplexed as to why Trenberth was unaware of that.

“I'm confident that other experiments will repeat the experiments we published in this BAMS report, and those will help reveal if the indications from the first such effort are robust or not,” Hoerling said.

Colorado State Climatologist Nolan Doesken told Climate Central that the study’s conclusions do not surprise him.

“Maybe it will be more obvious in 35 years, but from a 2014 vantage point here in our part of the country, changes in temperatures on a seasonally and annually averaged time frame do show a trend; precipitation probably does not, and the extreme tail of the precipitation distribution — the really big ones — are just too few and far between here to yet get much of a handle on,” Doesken said.

Giant floods and extreme rain happened in the same region at least twice in the 20th century, so it’s hard to peg climate change on something that has ample precedent in the area, and even harder to associate local extreme events to an increase in global greenhouse gas emissions, he said.

You May Also Like:
Three Decades Until Carbon Budget Is Eaten Through
Science Shows How Climate Change is Baking Australia NASA Ranks This August as Warmest on Record
The $90 Trillion Climate-Stabilizing Cookbook
What Will Survive in Hot, Acidic Oceans?
Arctic Sea Ice to Reach Sixth Lowest Extent on Record