Climate change is seriously stressing out the oceans.

That’s the conclusion of a new study that used measurements of an array of human pressures on the ocean — from acidification to overfishing — to make a map of where those factors combined into stressed-out hotspots, as well as how the combinations of stressors had changed over time. They found that two-thirds of the world’s oceans were seeing increased pressure and that climate change accounted for most of those increases. 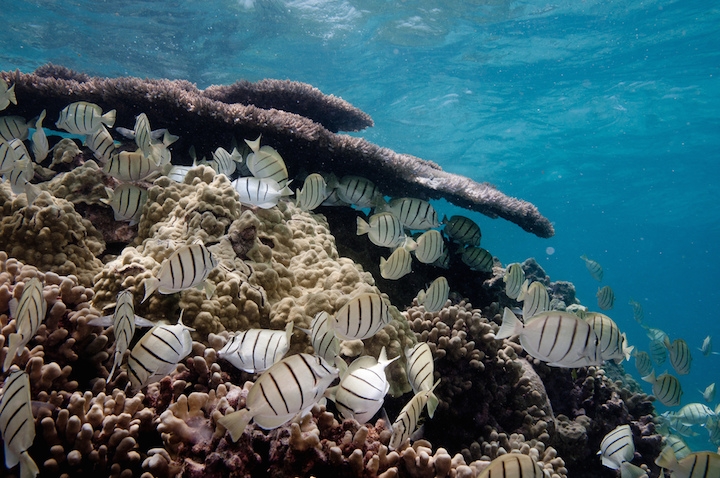 While the mapping effort doesn’t give a complete view and or address how the stressors are actually impacting various ecosystems, scientists not involved with the work said it is an important step in understanding the plight of the oceans and could inform policy decisions, showing where mitigation efforts are having a real impact.

“No part of the global ocean is without human influence,” the authors of the study, detailed in the journal Nature Communications, wrote. That influence comes from direct human impacts, such as trawling and fertilizer washed into the ocean, or more indirect ways, like the increased temperatures and carbon dioxide of the ocean that are a result of human emissions of greenhouse gases. Some 97 percent of the oceans are impacted by more than one of these issues.

Benjamin Halpern, of the University of California, Santa Barbara, and his team took data of a wide range of these factors, 19 in all, from satellites, computer models and fishery catch reports. They then combined them, yielding a map that showed where stressors were relatively high and low. They also compared the data from 2008 and 2013 to show where such pressures were high and going up and where they were low and abating — what Halpern calls hotspots and “hopespots.”

The team found that 66 percent of the oceans showed an increase in human stressors over the five-year period. Coastal regions, tropical and subtropical waters were particular areas that saw more impacts. About 5 percent of the oceans was heavily impacted and getting worse, including the North and East China seas, while 10 percent had low impact and was improving, such as the central Pacific.

“Not everywhere is going down the drain,” Halpern said. It “gives you hope that we can turn things around.”

The study found that climate change impacts were driving most of the increases in stress, which Halpern says shows how important it is to address climate change. But there is inherent inertia in the climate system — we’ll feel the impacts of today’s emissions for decades to come — so the map shows what other stressors can be addressed, and where, to see more immediate improvements.

Scott Doney, who studies acidification and nutrient loading at the Woods Hole Oceanographic Institution in Massachusetts and was not part of the study, said that while such work is important particularly for communicating with those outside the scientific community, “it’s not the complete story.” The study only looks at stressors, but not at what the actual impacts to particular ecosystems or species are. 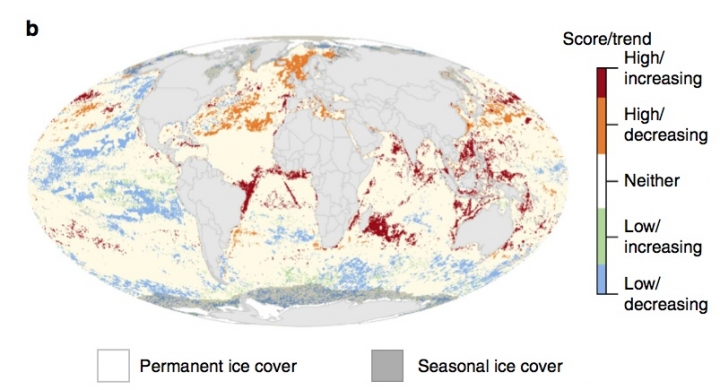 A map showing where ocean stress from human activities is high or low and increasing or decreasing.
Click image to enlarge. Credit: Halpern et al./Nature Communications

“This is a first cut, you need to then dig down” to see impact on particular resources, Doney said.

Ken Caldeira, of Stanford University, made similar comments. “Any attempt to combine multiple stressors is going to be plagued by the issue of how to weight one stressor relative to another. The relative importance of different stressors will vary from species to species as well as from ecosystem to ecosystem,” he wrote in an email. Caldeira was also not involved in the study.

The climate information in particular is tricky to work with in such snapshot comparisons because it can fall prey to the ups and downs of natural year-to-year variability, Doney said. He gave the example of the low impacts on the map off the U.S. West Coast, which he said is probably because of relatively low temperatures in that area in 2013, versus the scorching heat in the same area now.

But despite these limitations, such studies are “extremely valuable,” Caldeira said. “It is clear that we need to be taking better care of marine ecosystems by improving fishing practices and decreasing coastal pollution. And, of course, we need to stop using the sea and sky as waste dumps for our carbon dioxide pollution.”