Extreme wildfire seasons have been afflicting drought-parched California in recent years, and new computer modeling indicates that the state will continue to become more susceptible to ruinous fires as the world continues to warm. 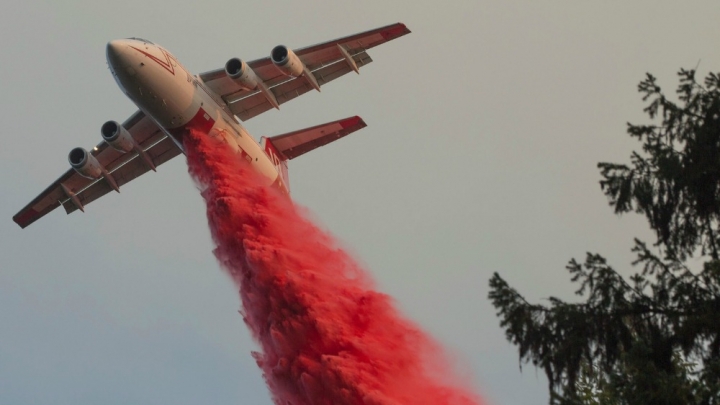 But the scientists behind an ambitious new study, which combined historical fire records and data with projections for a warming world, say they couldn’t directly connect climate change with last year’s extreme season of conflagrations up and down the Golden State.

“It’s difficult to attribute this event — the 2014 event — to human-caused climate change,” said Robert Gillies, Utah’s state climatologist. He was one of the authors of the study, published Thursday in the Bulletin of the American Meteorological Society.

The conclusions of the ambitious research effort, by Pacific Northwest National Laboratory and Gillies’ colleagues at Utah State University, highlighted the complex drivers of wildfire seasons — and the difficulty of drawing categorical links between individual seasons and climate change.

Wildfires are natural phenomena, particularly in the West, where they clear out small trees and brush, and where they are relied upon by plant species and ecosystems for regeneration and growth. But more than a century of fire fighting has increased fuel for fires, making them more intense when they finally arrive.

California’s fire seasons are also influenced by winds, rain and snowfall and temperatures — weather phenomena that are being affected by global warming.

By some metrics, California’s 2014 wildfire season was the most dangerous on record. By others, it was among the worst — it ranked sixth for acres burned, for example. The fires were fueled by drought, which left trees and plant matter tinder-dry. Drought, floods and varying temperatures occur naturally in California, where the weather is heavily influenced by Pacific Ocean cycles, but previous research has concluded that global warming has been exacerbating its drought. 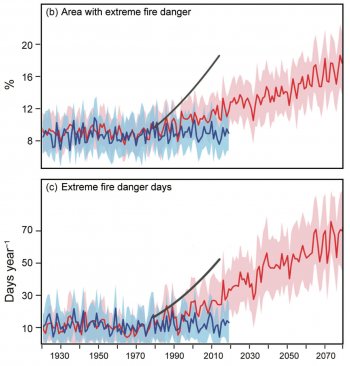 The red line shows extreme fire risks rising inside a computer model as the climate changes. The blue line depicts a world in which humans have no effect on the climate. The black line indicates worsening drought. Credit: BAMS.

Debate over the role of climate change in California’s wildfires recently became national news after the L.A. Times faulted Gov. Jerry Brown for publicly drawing connections between recent wildfires and climate change. The newspaper reported there was “not enough evidence” from science to support some of his claims.

Some scientists saw the brouhaha as an oversimplified distraction from a broader conversation on climate change and its effects in the West.

“There’s a desire by scientists to communicate effectively, and often that leads to overly simplified messages,” said Max Moritz, a fire scientist on faculty at the University of California at Berkeley. “There’s a desire by journalists to latch onto storylines or messages that are tractable and understandable. There’s a desire by policy makers to have relatively simple solutions that are easy to put into effect. With fire, it almost never fits into those nice simple boxes.”

Despite wavering on whether climate change contributed to California’s 2014 wildfire season, the new findings clearly indicate that such seasons are going to become more likely in the future.

“If we just go back and say, ‘OK, let’s not focus just on this one single event, but how about the general tendency of this fire risk?' ” said Jin-Ho Yoon, a climate modeler at Pacific Northwest National Laboratory who worked on the new study. “Then it shows clearly that it is increasing.”

You May Also Like:
50 Years After Warning, No Debate in Paris on the Science
This Year’s Ozone Hole is the Fourth-Largest on Record
Obama Likely to Make Keystone Decision By End of Term
Climate Implications Seen in Call For Keystone XL ‘Pause’
New York Prepares for Up to 6 Feet of Sea Level Rise