What Climate Change in the Rockies Means for its Water

In the West, Colorado is known as a “headwaters” state because most of the region’s biggest rivers begin in the Colorado Rocky Mountains.

The Colorado River. The Arkansas River. The Rio Grande. The San Juan River. The Platte River — North and South. Altogether, they provide 19 states with drinking and irrigation water, including the cities of Los Angeles, Phoenix and Denver, among many others. 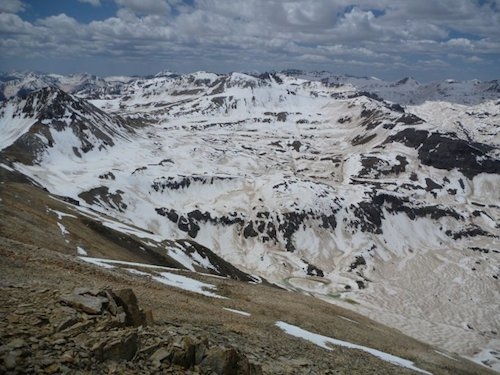 Dust on the snowpack in Colorado's San Juan Mountains. The dust, blown from deserts west of the mountains, speeds the melting of snow.
Credit: Jeffrey Deems/University of Colorado.

All of the water in those rivers comes from one source: the Rocky Mountains’ snowpack, which is expected to shrink as temperatures rise in a warming climate.

That’s why a new report by Colorado’s state water authorities showing how climate change will affect water supply there is so important. How much water is going to be coursing down these rivers in a warming world is highly uncertain, and that means the millions of people downstream of Colorado have a lot at stake.

“Already, snowmelt and runoff are shifting earlier, our soils are becoming drier, and the growing season has lengthened,” Jeff Lukas, lead author of the report released by the Colorado Water Conservation Board and the Western Water Assessment, said in a statement. “Wildfires and heat waves have become more common, too. Climate projections suggest those trends — all of which can affect water supply and demand — will continue.”

Here are three things you should know about what Colorado’s new climate change report says about the future of where Westerners will get their water:

1. Nobody knows if it’s going to get wetter, drier or stay the same in Colorado’s mountains, but warming temperatures could mean that there will be less water available for people to use anyway.

Climate models generally agree that the Rocky Mountains are going to get between 2.5°F and 5°F warmer though 2050, the report says, with summers warming more than winters, but there isn’t much agreement about whether they’ll be wetter or drier as the climate changes.

The climate models show a wide range of possible precipitation scenarios in Colorado’s mountains as temperatures rise, from a 5 percent decrease to an 8 percent increase in precipitation by 2050.

Regardless whether the mountains become wetter or drier, winter snowpack is likely to diminish as temperatures rise, and it could melt earlier. Mountain snow usually begins melting in early spring, peaking in June. But because of warmer temperatures, all that runoff could course through streams and rivers up to three weeks earlier by 2050, and it could melt much faster than normal. 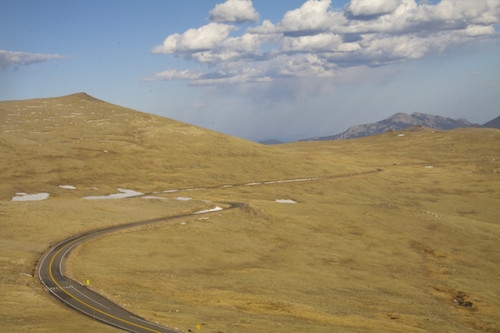 Trail Ridge Road passes through Colorado's Rocky Mountain National Park in May 2012, when the snowpack had nearly disappeared at a time when it is usually many feet deep.
Credit: Bobby Magill

Warmer temperatures will mean plants will consume more water and the soil will be drier, reducing the amount of water that will run off the mountains and into streams.

Early runoff is a problem for water supplies because dams and reservoirs aren’t designed to capture large amounts of water that tumbles off the mountains quickly, making less water available in the summer when demand is at its highest. It could force water managers to redesign how reservoirs and dams operate and strain farmers’ irrigation water supply because it’s less likely to be available in the summer when it’s needed the most.

2. Desert dust blown on the snowpack is bad news for the West’s water supplies.

If you fly over Colorado’s mountains in the winter, there’s a chance that some of the snow you’ll see below will appear slightly brown or tan in color. What you’re seeing is dust that blew onto those snow fields from the deserts west of the mountains. The soil in those deserts, many stricken by drought, has been disturbed by oil and gas development, grazing and other uses, and it is easily blown onto the mountains in strong winds.

That’s bad news for water in the West because the dust that lands on mountain snow absorbs heat and melts the snow, causing runoff to occur weeks earlier than normal and plants to absorb more water from the soil as the snow disappears.

Already, dust blown onto the mountains in recent years has reduced overall runoff in the Upper Colorado River Basin of western Colorado by 5 percent compared to conditions 200 years ago.

3. It’s likely that the major rivers will carry less water in 50 years, but there is a lot of disagreement about that.

Increasing temperatures, dust on the snowpack and other climate change-related factors are likely to work together to reduce the total amount of water in many of the rivers that flow out of Colorado.

The major rivers that flow to the south — the San Juan and the Rio Grande rivers — are almost certain to see decreases in streamflow by 2050, the report says. But climate models are split about whether the state’s other rivers, including the Colorado, Arkansas and the South Platte rivers, will see reduced flows.

Either way, the the report says the odds are that less water will be flowing out of the state in a warmer climate. According to the Assessment of Climate Change in the Southwest United States, which became part of the National Climate Assessment, if climate change reduces the amount of water flowing in the Colorado River, downstream metropolises such as Phoenix and Tucson could face severe water shortages.

In a warming world, water authorities may have to plan for extreme weather that they never planned for in the past — megadroughts that could dry up water supplies for many years or extreme flooding that could wash out or damage dams and pipelines.

So, the bottom line for the West’s long-term water supply, the report says, is that it’s going to be a lot more difficult to plan for how to secure water for growing cities in the future, and figuring climate change into water planning is going to be critical.

You May Also Like
87 Cities, 4 Scenarios and 1 Really Hot Future
Keystone XL Will Spike Oil Demand and CO2, Study Says
Odds of El Niño Drop; Still Expected to Form
Has Your City Reached its Peak Heat Yet?