Climate Change Will Hit the Poorest the Hardest in the U.S.

Union County is tucked in northern Florida, half an hour north of Gainesville and an hour west of Jacksonville. It’s Florida’s smallest county, a mostly unremarkable landlocked stretch of pine forest interspersed with lakes.

More than 15,000 people call it home, working largely in healthcare, transportation and public administration. The state prison and Target distribution center are among the county’s notable employers. The unemployment rate is low at around 4 percent, but most jobs aren’t high paying. As a result, Union County is Florida’s poorest county by per capita income.

New research shows there’s something else that makes Union County unique: it’s ground zero for the economic damage that climate change will cause in the U.S. 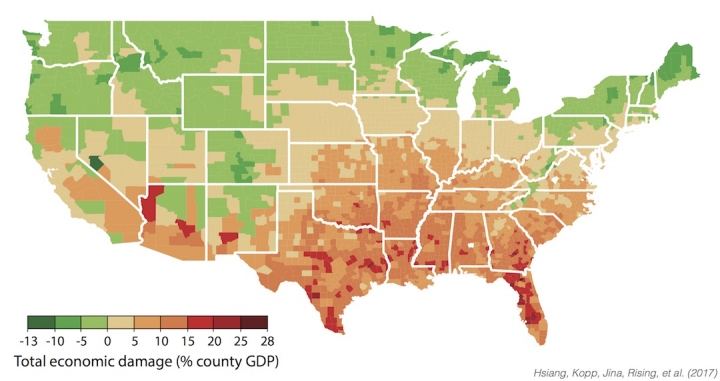 Researchers published a landmark study in Science on Thursday that analyzes what climate change will mean for the economies of all 3,144 counties in the U.S. The analysis is the first of its kind, but the results show what’s becoming a common refrain when it comes to the impact of climate change: Rising temperatures will cause the poorest to suffer the most, even in the wealthiest nation in the world.

Union County is just one of a host of poor counties in the South that will be hit disproportionately hard by the impacts of climate change. In contrast, more wealthy counties in the northern third of the country are likely to be insulated from the effects of climate change and could even make economic gains because of new agricultural land opening up and fewer deaths due to cold weather. The findings have broad implications for county planning and the need for a strong, coordinated response to address climate change at the national level.

“For the first time, we have a strong-evidenced based relationship between temperatures and damage (at the county level),” Amir Jina, an economist at the University of Chicago who co-authored the new study, said. “At high resolution, there will be winners and losers from climate change within the U.S.”

To get their results, Jina and his colleagues used climate projections that have carbon pollution continuing on its current trajectory to 2100. They then modeled how climate change could impact eight economic indicators including agriculture, energy expenditures, mortality, labor productivity, crime and coastal damage from sea level rise.

The reason for the dramatic losses in poor counties in the South is because they’re right on the brink of dangerous temperature thresholds. Once summer highs pass a certain point, mortality and crime tend to increase while productivity drops.

“We’ve known for 10 years or so that there’s a lot of important threshold effects in all these impacts,” Jina said. “Labor productivity is a classic example. It looks like temperature doesn’t affect the time you work in agriculture or manufacturing until your day gets up to about 35°C (95°F) and then suddenly you start working a lot less. So if I’m in a place close to threshold, then a small change in threshold has big risks on the economy or well-being.” 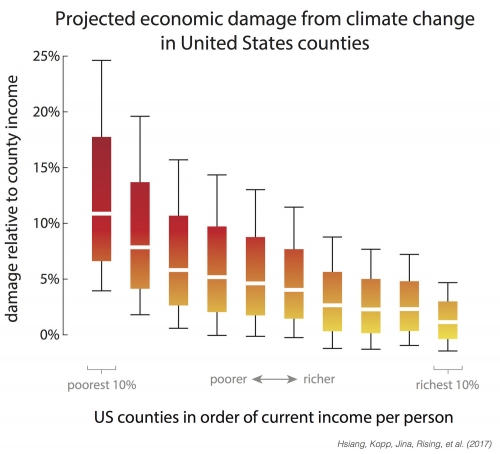 In Union County, for example, the average summertime high is around 90°F. By the end of the century, it will likely surpass 95°F, a tipping point for more heat-related deaths and violent crime while also contributing to a drop in labor productivity. When all the changes are calculated, Union County stands to see costs in excess of 27 percent of its county income.

That pattern plays out across the South. Of the 100 counties that will lose the most due to climate change, all but three of them are in the Southeast (the outliers are in New Mexico and Arizona).

In comparison, the 100 counties that will benefit or lose the least from climate change are all in the northern part of the country with the exception of higher elevation counties in the Appalachians and Rockies.

The research builds off a 2014 report and sets a baseline for what will happen if the U.S. makes no effort to adapt to climate change even as the impacts get worse. That means the findings are the clearest indication yet of what’s at stake for the U.S. economy if leaders choose to ignore reducing carbon pollution or adapting to its impacts.

“You’re able to see where our policy priorities should be by comparing those (economic sectors),” Jina said. “We wanted to make sure we had this context to say here’s this study that puts them next to each other.”

The research was widely praised by economists for its unique approach.

“From a methodological perspective, ‘bottom up’ county-level damage estimates are a massive step forward for this literature,” Noah Kaufman, an economist at the World Resources Institute said. “Typically, damage estimates are at the country level at best, which limits real-world applicability. County-level estimates will have important implications for adaptation and resilience planning, and, as the paper emphasizes, the findings tell a new and compelling story about within-country distributional effects of climate damage.”

The study also creates a template for what can be done in other countries to assess their own climate risks and how to prepare for them.

Thomas Sterner, an environmental economist at Sweden’s University of Gothenburg, said in an email that the study was innovative and detailed and that the researchers “belong to the forefront of climate science modelling when it comes to damage estimates.

“Similar studies can and should be done in many countries and eventually we will start to get a better picture of the damage to be expected. This will be important to decisions on both mitigation and adaptation investments.”

You May Also Like:
The Larsen C Rift is Racing to Its Conclusion
Sunnier Skies Driving Greenland Surface Melt
These NASA Images Show Siberia Burning Up
States Betting on Giant Batteries to Cut Carbon