You might not be aware of it, but May is Lyme Disease Awareness Month, devoted to reminding people who spend time in wooded areas to cover up. Otherwise, a bite from a black-legged tick (Ixodes scapularis, a.k.a. a deer tick) could lead to joint and muscle pain — and in some cases, to chronic arthritis and even heart problems.

But in a warming world, May is really too late to get people thinking about protecting themselves, said Richard Ostfeld, a disease ecologist at the Cary Institute of Ecosystem Studies in Millbrook, N.Y.

“The nymphs used to peak in June,” he said, referring to immature ticks, which are most likely to transmit disease. “Now it’s happening in mid-May, and if you project forward with simple climate models, it’ll be early May within a couple of decades.”

That’s the conclusion of a paper Ostfeld co-authored recently in the journal Philosophical Transactions B, published by Britain’s Royal Society. He and his co-authors looked at 19 years’ worth of data on the Cary Institute grounds, about two hours’ drive north of New York City, where there’s a weather station and an abundance of Ixodes. That allowed them to tie changes in tick emergence directly to climatic changes.

“The climate has clearly warmed,” said Ostfield. “That’s not even slightly controversial.” And in this one location, at least, ticks have shifted their lifecycles accordingly.

Ticks are also shifting their ranges, moving to higher altitudes and higher latitudes into areas where temperatures used to be too cool for comfort. This is just the sort of thing scientists have been expecting as the planet warms (although Ostfeld said that some of the expansion in tick range also comes as forests cleared for agriculture have grown back, allowing ticks to recolonize places in which they used to live).

As Ixodes ticks move into new areas, they’re also retreating from areas that have warmed too much, including parts of south Florida and other areas of the Southeast. “But these areas are tiny compared the with total area of spread,” Ostfeld said.

Changes are afoot in other parts of the U.S. as well, however. A study out of Indiana University, published in Molecular Ecology, shows that disease-carrying ticks are shifting their ranges in southern Indiana. The most worrisome culprit in this case: the lone-star tick, which causes something known as southern tick-associated rash illness, or STARI — one of no fewer than 16 tick-borne diseases listed by the CDC. (A possible 17th: there’s some evidence that lone-star tick bites may also trigger an allergy to red meat,) 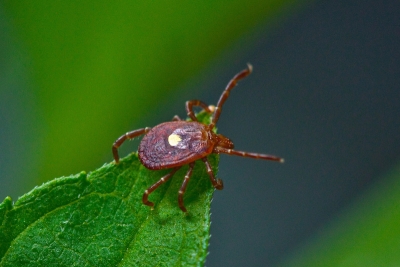 “Ten, 12 years ago, you couldn’t find a lone-star tick in our area,” said Indiana’s Keith Clay, an expert on the microbes found in ticks and other insects. “Now it’s the dominant species.”

Both Clay and Ostfeld emphasize range expansion by itself doesn’t guarantee that tick-borne illnesses will become more of a problem.

“It’s possible that the Borrelia burgdorferi bacterium that causes Lyme disease, for example, will find it harder to survive in warmer conditions, even if the ticks do. But I consider it unlikely,” Ostfeld said.

It’s also possible that the bacterium will flourish in warmer weather, just as the Plasmodium parasite that causes malaria does. But Plasmodium also becomes less infectious. “We’re going to study this in ticks,” Ostfeld said.

But it’s even more complicated than that, according to Clay.

“Ticks carry many microbes that are closely related to human pathogens, but aren’t spread through bites. This raises the question of whether pathogens have evolved from these microbes, or perhaps vice versa, or whether they can go back and forth,” he said.

If the non-threatening microbes can mutate into organisms that can threaten humans, “then every tick out there is more dangerous than we think,” he said.

You May Also Like:
Warming Puts Emperor Penguins at Risk of Extinction
Is Warming Changing Boundaries of Hurricane Season?
Ocean Microbes Feel a Warming Climate’s Effects