They may be small, but krill — tiny, shrimp-like creatures — play a big role in the Antarctic food chain. As climate change warms the Southern Ocean and alters sea ice patterns, though, the area of Antarctic water suitable for krill to hatch and grow could drop precipitously, a new study finds.

Most Antarctic krill are found in an area from the Weddell Sea to the waters around the Antarctic Peninsula, the finger of land that juts up toward South America. They serve as an important source of food for various species of whales, seals and penguins. While those animals find other food sources during lean years, it is unclear if those alternate sources are sustainable long-term. 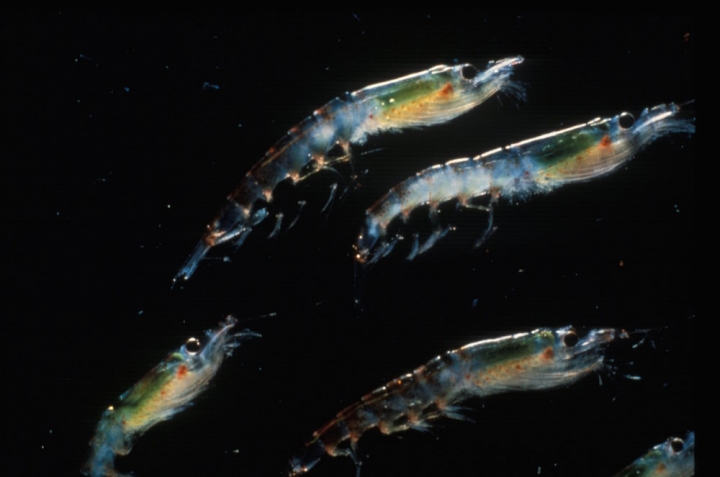 Over the past 40 years, populations of adult Antarctic krill have declined by 70 to 80 percent in those areas, though researchers debate whether that drop is due to the effects of climate change, a rebound in whale populations after the end of commercial whaling or some combination of those pressures.

Because of its key role in the regional food chain, scientists are concerned about the impacts that future climate change may have on the krill population and the larger Antarctic ecosystem.

In the new study published in the journal Geophysical Research Letters, Andrea Piñones and Alexey Fedorov examined how expected changes in ocean temperatures and sea ice coverage might affect krill during their earliest life stages when they are most vulnerable to environmental conditions.

Krill has a complex, regimented life cycle that requires a delicate balance of conditions. Female krill lay their eggs in the upper ocean during summer; those eggs then sink to where the water is in the right temperature range for them to hatch. Once they hatch, the krill larvae swim back to the surface waters where they must find food, in the form of phytoplankton, within 10 days or they will die.

The larvae must then eat enough food during the late summer and fall to fatten up before winter. To survive that winter, they also need sea ice to form by a certain time, as they use it for shelter, as well as feeding on the algae that dwells in the nooks and crannies of the ice.

“Even if there is a lot of a sea ice, if the sea ice is not there at the time that they need, they don’t survive,” said Piñones, who has dual appointments at the Center for Advanced Studies in Arid Zones and the High Latitude Marine Ecosystem Dynamic Center in Chile.

Piñones and Fedorov, who works at Yale University, took a krill growth model and plugged in expected ocean temperature rise from climate models, projections of how sea ice area and the timing of its growth and melt might change, and possible changes in phytoplankton to see how those changes impacted the krill during its early life stages.

“We see a scenario that is not very favorable for krill,” Piñones said.

While warmer ocean temperatures help the krill hatch faster, declines in sea ice area, delayed sea ice formation, and a drop in phytoplankton populations meant that overall, the habitat suitable for young krill could decline by up to 80 percent, they found.

“This paper is a significant step forward to predict the consequences of climate change (temperature and sea ice dynamics) on circumpolar krill population,” So Kawaguchi, a krill biologist with the Australian Antarctic Division, said in an email. He was not involved in the new study.

There are significant uncertainties, though. For one, the changes in sea ice projected by models vary widely. While sea ice increased in some areas and decreased in others, in general the biggest declines were in the area where most krill today are found.

This figure depicts the early life cycle of Antarctic krill. Krill start their lives in the summertime when females lay eggs near the surface. As the eggs develop, they slowly sink to depths of 2,300 to 3,300 feet. After the eggs hatch, the krill larvae swim up to the ocean surface to feed during the rest of summer and early fall. The krill overwinter underneath sea ice and molt into juveniles during spring.
Click image to enlarge. Credit: American Geophysical Union

Whether phytoplankton populations will increase or decrease with warming is another unknown. If they do decline, the bigger that decline is, the more it will curtail krill habitat, the study showed.

The study also left out the effects of ocean acidification, which are expected to be particularly pronounced in polar regions as cold water absorbs carbon dioxide more readily. A 2013 Nature Climate Change paper by Kawaguchi looked at the potential effects of acidification on hatching rates and found declines in much of the same krill habitat as the new study.

The combination of acidification with the factors examined in the new study “could be catastrophic” for krill, Piñones said.

Both Piñones and Kawaguchi say that a lot more research needs to be done to better understand the future of Antarctic krill. In particular, more observations of krill during the winter when they are sheltering under sea ice are needed.

“We still don’t have a full grasp of how krill interact with ice and how this changes as krill grow, and this interaction could further change as the environment changes,” Kawaguchi said.

“There is enormous uncertainty in our knowledge regarding the ecosystem interaction and how it responds to changing climate,” he said. “The important message here is that we need to get a better handle on the ecosystem processes through well designed observation and experimentation to improve and better tune the ecosystem model to reduce the uncertainties in our prediction.”

You May Also Like:
California’s New Climate Rules, Explained
The Future of National Parks is Going to be a Lot Hotter
Study Finds Biofuels Worse for Climate than Gasoline
Study Suggests Earlier Onset of Human-Driven Warming