Moist air comes flowing off the Mediterranean into Syria each winter, unleashing rains that transform the dull brown countryside into myriad hues of green. But in 2005, the rains never fully materialized, the first of five consecutive failed rainy seasons that sparked the worst drought in Syria’s history and directly preceded the country’s descent into civil war.

A groundbreaking study published on Monday in the Proceedings of the National Academy of Science shows that climate change doubled or even tripled the likelihood of the drought that became part of a cascade of events that have killed and displaced millions, gave rise to Islamic State and left a country in ruins.

“This is maybe the first example of connecting emerging climate change to a modern conflict. This is not an analysis of Mesoamerica or something historical. This is happening today,” said Colin Kelley, lead author of the new study and a PACE postdoctoral fellow at University of California, Santa Barbara.

The study builds on a growing body of literature that has linked climate events such as heat waves and drought to conflict. The findings also reflect the Pentagon’s view that climate change is a threat multiplier that poses “immediate risks.” But rather than focusing on past events, the findings are based squarely in the present.

The drought that began in 2005 was the most severe on record for Syria. It serves as a punctuation mark on a winter drying trend that has been happening since record keeping began in 1900 and has become more severe in the last 25 years. Three of the four most severe droughts on record for the country have occurred since the late 1980s.

The drying trend and most recent drought aren’t just an artifact of natural climate variability. Kelley used models to see how greenhouse gas emissions influenced the drought. His analysis shows that they made the drought up to three times more likely.

Rising temperatures, particularly in summer, could also be playing a role in making droughts more likely and severe. Summer temperatures across the Fertile Crescent have risen by about 2.2°F since 1900. High heat can suck moisture out of the soil, further reinforcing drought.

While climate change did up the odds of the drought, Kelley stressed it was not the only factor that drove the uprising.

“We are saying it is a contributing factor. There’s a lot of evidence that this is an emerging influence of climate change on the region,” Kelley said.

Marshall Burke, a fellow at Stanford’s Center on Food Security and the Environment, said the results presented “a compelling qualitative case” for the drought stirring up conflict as part a bigger context.

In some ways, that context extends back to the 1970s when new policies were put in place to ramp up agricultural production across the country. Those policies helped Syria produce enough wheat to stop imports in 1995, but they created unsustainable groundwater usage — with users drawing more water out of aquifers than what came flowing in. And despite heavy groundwater withdrawal, two-thirds of Syrian agriculture still remained dependent on rain for irrigation. 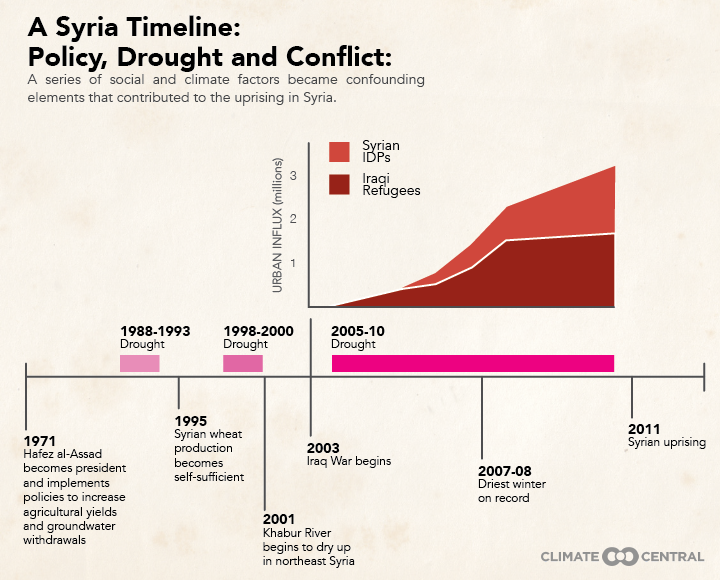 Those factors left Syrian farmers and herders in a poor position to deal with catastrophic drought in 2005, let alone for five consecutive years. The most recent drought also hit in the wake of a severe drought from 1998 to 2000 that farmers had yet to fully recover from.

When the drought hit in 2005 and reached its nadir in 2007 and 2008, the driest winter on record for Syria, farmers came pouring into urban areas — the same areas where up to 1.5 million Iraqi refugees fleeing the Iraq War settled between 2003 and 2007. The result was a 50 percent increase in Syria’s urban population compared to 2002.

All of this set the stage for 2011 when unrest broke out in Syria in January and eventually gave rise to a civil war and the Islamic State. The conflict has killed 210,000 and affected 10.8 million — nearly half of Syria’s total population — according to recent estimates.

“Reading this paper is like reading the analysis of an airline crash. There is a chain of events, stretching back over 40 years, that had led to the present calamitous conditions. The change in climate, forced by greenhouse gases, was one of the key events in this tragic story,” David Titley, director of Penn State's Center for Solutions to Weather and Climate Risk and retired Navy Rear Admiral, said. “This paper points to the importance of resilience, and how spectacularly a society can break and fracture when climate-forced events exceed the capacity to adapt.”

Marwa Daoudy, a Middle East expert at Georgetown University's Center for Contemporary Arab Studies, said that the inclusion of variables outside the drought painted a clear picture of the many factors that destabilized the country.

Other countries in the Middle East are already feeling the pinch of water scarcity. With drying and warming are projected to continue into the future, that could mean more drought and further instability across the region.

“That is bad news for the people who live there. We have to start thinking about what’s happening and have a contingency plan rather than just reacting to something bad after it happens,” Kelley said.