If you’ve hiked through a meadow in bloom in Europe or North America, you’ve probably heard the buzz and seen the lazy meanderings of bumble bees from flower to flower. Yet what was once a common sight on the southern end of their range is becoming rare or nonexistent.

According to new research published in the journal Science, climate change could be intimately tied with the plight of the prolific pollinator. But unlike other species that are shifting northward in response to warming temperatures, the majority of bumble bees species included in the new study are failing to expand their range. Because they can occupy a niche as early and late season pollinators, farmers, forests and flowers could all suffer from their disappearance. 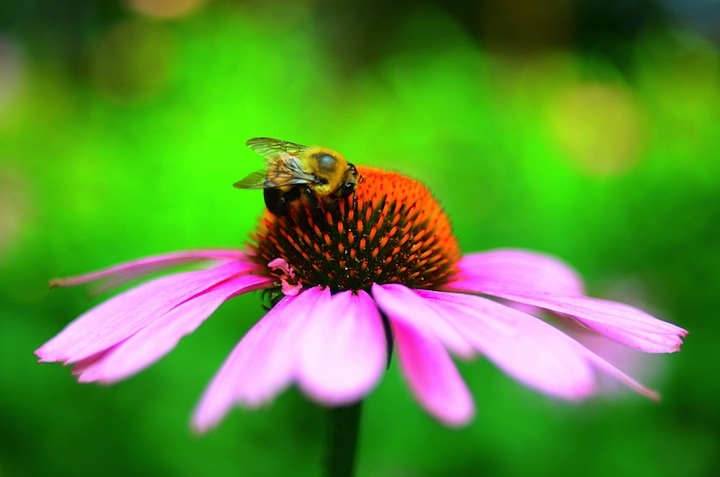 A bumble bee on an echinacea flower.
Credit: Will Marlow/flickr

“They’ve run up against a wall,” Jeremy Kerr, a biologist at the University of Ottawa, said. “They just aren’t colonizing new areas and finding new locations. Bumblebees are caught in a climate vise.”

Kerr led the new research, which analyzed a massive dataset of 423,000 observations of bumble bees across North America and Europe stretching back to the start of the 20th century. The results show that despite 4.5°F of warming that has made the northern end of their range more habitable, bees are failing to follow the heat even as they are disappearing on the southern fringes at an alarming clip.

“We have observed in other research that rapid warming and particular impacts of extreme weather events cause populations of bumble bee species to go locally extinct,” Kerr said.

In all, bumble bees have vacated a swath of territory 185 miles wide across their southern range over the course of the century. In the mountains, bees are also vacating their lower elevation habitat. Kerr said that though they haven’t specifically identified why bumble bees aren’t making up for lost territory by moving north, it’s possible that they just aren’t reproducing fast enough to migrate. Climate change is also affecting when certain flowers bloom, which could have a further effect on bumble bees and other pollinators.

Linking bee decline — whether bumble bee or honey bee — to a specific cause (or causes) has become an increasingly important research field. Bees are crucial pollinators to both nature and bottom lines and understanding the cause of their decline could help define solutions. Because they’re well-adapted to cooler temperatures and flying in wet conditions, bumble bees also work the shoulder seasons of late spring and early fall while other pollinators drop off.

Some research has linked bumble bee decline to the wide use of neonicotinoid insecticides since the 1990s — the same insecticides some believe are responsible for honey bee colony collapse disorder — but the new research shows the decline started before their use became widespread.

Other research has shown land use change could be a major factor in their decline. Sydney Cameron, an entomology expert at the University of Illinois and science advisor to the IUCN Bumble Bee Specialist Group, said while she sees the importance of the new results, she believes land use change is still likely a major driver in bee loss. In particular, she pointed to the drop in commercial clover production — an important food source for bumble bees in mid-summer — in the 1980s as a clear driver of their decline. 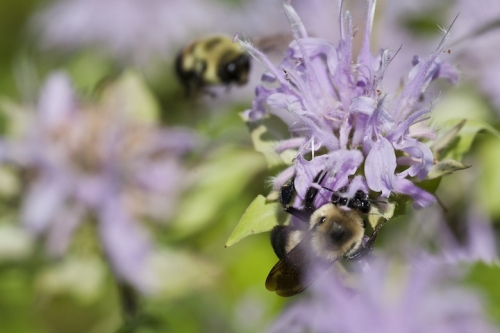 Cameron also questioned whether the 4.5°F of warming was significant enough to get bees to move northward and advocated for doing analyses that look at local changes — including Asia, which is home to half the known species of bumble bees and 60 percent of the globe’s human population — in addition to a massive database analysis like Kerr’s.

“Big global patterns are a step, but then the details must be collected,” she said. “It may be they’re just happy where they are, 2.5°C (4.5°F) might not be enough to move them north. Nothing’s to say they won’t move north once it gets hotter.”

Kerr himself cautioned against discounting the impacts of changing land cover and the use of insecticides, saying that “there’s no doubt” they hurt bumble bees. However, he said considering climate change would be key for ensuring bumble bees’ survival.

“If we’re interested in preserving species for the future, we’ll need to intervene in a significant way to help them adapt,” he said.

In the case of bumble bees, interventions aren’t just the purview of federal and state agencies that control large swaths of land. Individuals can plant bee-friendly landscapes heavy on wildflowers and light on lawn.

“If folks put in a wildflower garden, bees will respond,” Hatfield said. “It just seems to really be a build it and they will come situation.

“If someone asks you to do something about climate change and polar bear, you can write a check and hope it helps. With pollinators, you can do something in a meaningful way and actually make a difference.”