When the world's miners, oil-workers, construction teams and industrialists descend on Greenland over the next few years to dig below the rapidly retreating icecap for its ores, hydrocrabons and minerals, no one will watch with more concern – or confidence – than Prime Minister Aleqa Hammond. 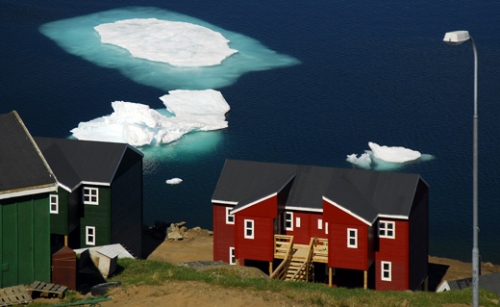 Climate change is placing Greenland at the heart of 21st century geopolitics. As the ice retreats, it is moving from being a non-player in global affairs to the center of a new international resource rush.
Credit: Flickr/banyanman

The Inuit leader of a country with just 56,000 people who have lived in remote, scattered communities largely by fishing and hunting knows that the arrival of tens of thousands of foreign workers will be as economically important and as culturally disruptive as anything in Greenland's history.

“The shock will be profound. But we have faced colonization, epidemics and modernization before,” she says. “The decisions we are making [to open up the country to mining and oil exploitation] will have enormous impact on lifestyles, and our indigenous culture.”

“But we have always come out on top. We are vulnerable but we know how to adapt,” she said on a visit to Norway this week.”

Climate change, she says, is placing Greenland at the heart of 21st century geopolitics. As the ice retreats, it is moving from being a non-player in global affairs to the center of a new international resource rush. “Climate change and this resultant new industrialization brings new risks. We must understand that the effects will be both positive and negative,” she says.

Not only has the retreat of the icecap made mining feasible in previously inaccessible areas, but the dramatic melt of the Arctic sea ice may within one or two generations locate Greenland on a vastly profitable trans-polar trading route between the Pacific and Atlantic oceans.

Hammond, whose father died in the ice when she was 7 and who grew up without running water or central heating, is now being courted by world leaders who see the Arctic as an emerging strategic zone.

Chinese, American, Russian, British, Japanese, Korean and other companies have all staked claims for its resources, and her government has awarded more than 120 licenses to explore for oil and gas, iron ore, uranium, emeralds and nickel as well as what are thought to be the largest deposits of rare earths – vital for digital technologies – outside China.

Greenland, which is seeking independence from Denmark, is politically and socially split, with many saying Hammond and her new government are going too fast. 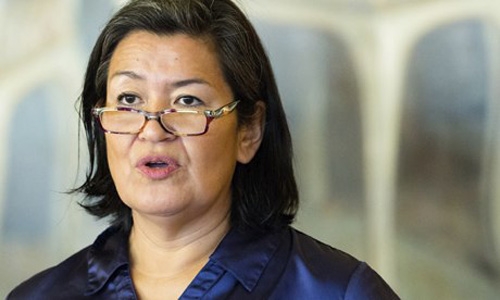 Greenland Prime Minister Alega Hammon says climate change and the resultant new industrialization brings new risks and we must understand that the effects will be both positive and negative.
Credit: Johannes Jansson/Norden.org via The Guardian

“If you want to become rich, it comes with a price,” says Aqqaluk Lynge, a Greenlander who is chair of the Inuit Circumpolar Council which represents Inuits from Alaska, Greenland and Canada at the UN and other forums.

“People have to imagine the consequences of what the influx of foreign labor will be. Being a minority in your own country, is that what you want? We have to be more realistic. We should be very careful inviting foreign mining companies. We have had experiences before when whole towns have been changed with the influx of Danish contractors. We lack experts in many areas like health. 56,000 people cannot [do] everything,” he says.

Estimates of how many foreign workers will be needed to exploit Greenland's minerals range from 10,000 to 200,000. London Mining, which is behind a delayed project to build an iron ore mine, is expected to bring in 2,000 - 3,000 Chinese.

“We fear being overwhelmed. It would be better if they lived in camps but there is certain to be interaction,” said Lynge.

“We are well used to the fishing industry coming to Greenland but we do not know the culture of miners and the numbers could swamp us.”

But Hammond responds that it is because Greenland has been economically and politically marginalized for so long and because modernization has not been handled well over the past 30 years that the country has no option but to go forward fast and seek independence from Denmark. 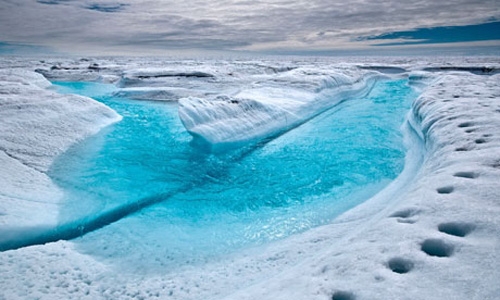 Each summer, streams channel much of the melted ice along Greenland's low lying ice sheet. Such melts are on the rise, studies report.
Credit: Courtesy Ian Joughin/AAAS via The Guardian

Hammond, a former family minister who has worked in Inuit communities in Canada and at home, has seen how rapid cultural and economic change has devastated polar communities. Greenland has the highest suicide rate in the world and young people, especially, suffer major psychiatric illness and depression. According to government reports, one in every five people attempts to kill themselves at some point in their lifetimes.

There are many reasons, but the clash between the traditional and modern western culture is thought to be at the root of many suicide attempts. “We've seen so many suicides over the years. They have always been there when people feel they cannot contribute to society,” she says.

And the resource rush will bring with it new health problems. “We must counteract the illnesses of industrialization, including diabetes and heart disease. Our lifestyles [can expect to shift] to what we see is happening to Europe and North America,” said Hammond.

“The modernization program [of the past 30 years] has not helped everyone. The new developments will have profound effects on everyone but they are designed to make householders stronger. We need to find ways to help people adapt. We need the money to be able to help households.

“A hundred years ago we all lived in communities of under 200 people. Now one quarter of the population lives in the capital Nuuk and only 20 percent live in villages. In that time we have seen the rapid loss of traditional values,” she says.