As a major drought devastated the West and Midwest beginning in 2012, farmers racked up billions of dollars in crop losses and water managers grappled with possible water shortages for millions of people as reservoirs dried up in the heat.

That drought is now gone. But scientists have found that the dry spell showed unusual wild extremes of wetness and warmth — indicators that climate change may be altering the typical characteristics of drought across the U.S., according to a new National Oceanic and Atmospheric Administration study published in the Bulletin of the American Meteorological Society. 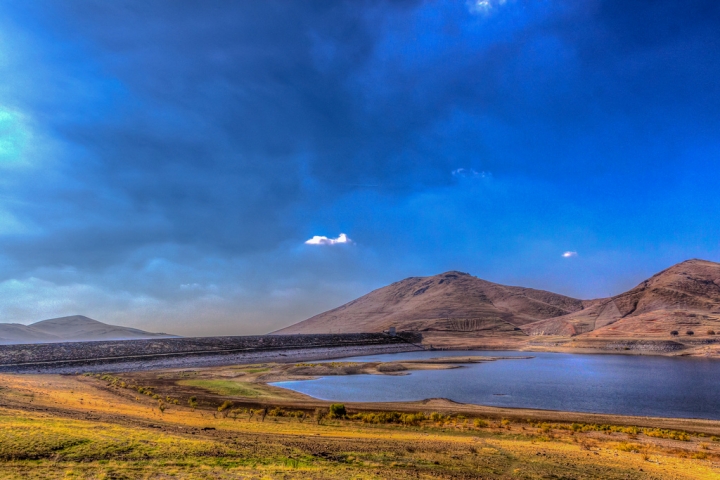 Water levels in Lake Success, Calif., dropped to 4 percent of capacity during the state's devastating drought in 2014.
Credit: David Siebold/flickr

The stakes are high. Extreme drought across the U.S. has contributed to tens of thousands of job losses, unpredictable and often extreme rainfall and devastating wildfires that have left behind many millions of charred acres of land and billions of dollars in property losses.

Study author Richard Heim, Jr., a researcher at the National Centers for Environmental Information at NOAA, compared a nationwide series of dry spells beginning in 1998 to two other devastating droughts in the 1930s and 1950s, including the Dust Bowl.

He said one of the most unique features of the drought as it spread across the country in 2012 was that some parts of the country were outright soggy while others dried up in the sun. Compared to two earlier dry spells, a recent series of droughts beginning in 1998 saw the largest area of the U.S. with normal or above-normal precipitation.

“The main thing is the 1998-2014 drought episode is the warmest of the three major drought episodes. It’s also the wettest,” Heim said. “A huge chunk of the country is in drought (during that period) and other chunks are really wet.”

Warmer temperatures over the past 30 years and more frequent regional dry spells since 1998 are changing the water cycle, posing challenges for urban and agricultural areas throughout the country.

“When broken down by region, the 1998-2014 episode had more days with precipitation than the other two episodes for all regions except the southern plains and Lower Mississippi Valley,” the study says.

During that time, the Northeast and Midwest, which saw their own dry spells, received the most rain and snowfall, while much of the West dried out, the study says.

2012 was a critical year for drought in the U.S. Several ongoing regional droughts “merged” to create a massive nationwide drought leaving more than 60 percent of the country suffering severe levels of drought or worse.

Today, about 7 percent of the continental U.S. is in drought considered severe or worse, down from 22 percent in early January and 31 percent last November.

Research shows that when dry spells occur, climate change is likely to make them drier than they would otherwise be because warmer temperatures increase evaporation. It also means that when storms hit, more precipitation is likely to fall as rain than snow, shrinking the snowpack that’s important to storing water for cities and farmers to use during the dry season.

A Climate Central analysis shows that since 1949, 68 percent of weather stations between 2,000 feet and 5,000 feet in elevation in 42 states have seen a lower percentage of winter precipitation falling as snow.

Benjamin Cook, an associate research scientist at Columbia University’s Lamont-Doherty Earth Observatory, who is unaffiliated with the study, said that though scientists can’t say definitively that global warming caused the most recent drought, climate change projections clearly show that drought intensity and risk will increase for much of the U.S. Warmer temperatures are already exacerbating recent droughts in California, the Pacific Northwest and the Colorado River Basin, he said.

Cook’s 2015 research shows that rising temperatures and decreasing rainfall driven by climate change are creating an unprecedented risk of severe drought in the Southwest and Central Great Plains, setting up drought conditions that could be worse than at any time in the last millennium, even worse than the Dust Bowl.

Heim’s study shows that one of the unusual characteristics of the most recent drought compared to those in the 20th century is that, on a national scale, the drought’s driest seasons were in the winter and spring. Warm temperatures during those seasons resulted in greater evaporation and transpiration, worsening drought conditions. The driest seasons in the previous droughts were fall and summer.

Cook said that the 2012 “merger” of regional droughts is unusual because different regions of the country typically see their wet and dry seasons at different times of year. California, for example, receives nearly all its precipitation during the winter, while the Central Plains see their wettest months during spring and early summer.

“For multiple regions to be in a period of extended drought simultaneously therefore requires a level of synchronicity across the climate system that is rare,” Cook said.

Heim said drought over the past 20 years was caused by different atmospheric conditions depending on the year.

For example, a more northerly shift in the track of the jet stream and storms since the 1970s have led to shifts in drought location and intensity in the U.S.

La Niña was among the triggers of the devastating California drought, along with a prolonged high pressure ridge over the Pacific Ocean that deflected storms northward, missing much of California during the height of its drought.

Jay Lund, director of the Center for Watershed Sciences at the University of California-Davis, said Heim’s study is “thought provoking,” but he said every drought is unique.

“Most droughts are a bit quirky in their character, and all droughts impact a different society and economy than their predecessors making each drought and its lessons substantially unique,” Lund said. “Still, it is very likely that higher temperatures will worsen the severity of droughts.”

You May Also Like:
Atlantic Oil Surveys Could Kill Food Used By Fisheries
Trump’s Base the Big Winner from Paris Withdrawal
The Larsen C Iceberg Is on the Brink of Breaking Off